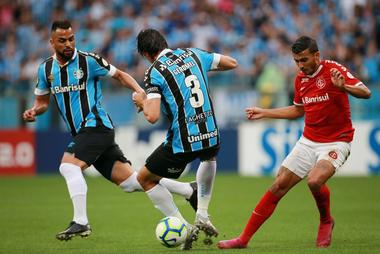 PORTO ALEGRE (Reuters) – A goal in each half gave Gremio a comfortable 2-0 win over city rivals Internacional in the Porto Alegre derby in Brazil’s Serie A on Sunday.

Pedro Geromel put Gremio ahead when he headed home a free kick after 34 minutes and then Romulo doubled their lead 12 minutes from time with a delightful chip from the edge of the penalty area.

Gremio’s task was made easier six minutes into the second half when Internacional goalkeeper Marcelo Lomba was shown a red card.

The result meant that Gremio moved four points clear of Inter in fifth place in the Serie A. Inter sit in seventh, behind Athletico Paranaense on goal difference.

Flamengo lead the table, eight points ahead of Palmeiras.