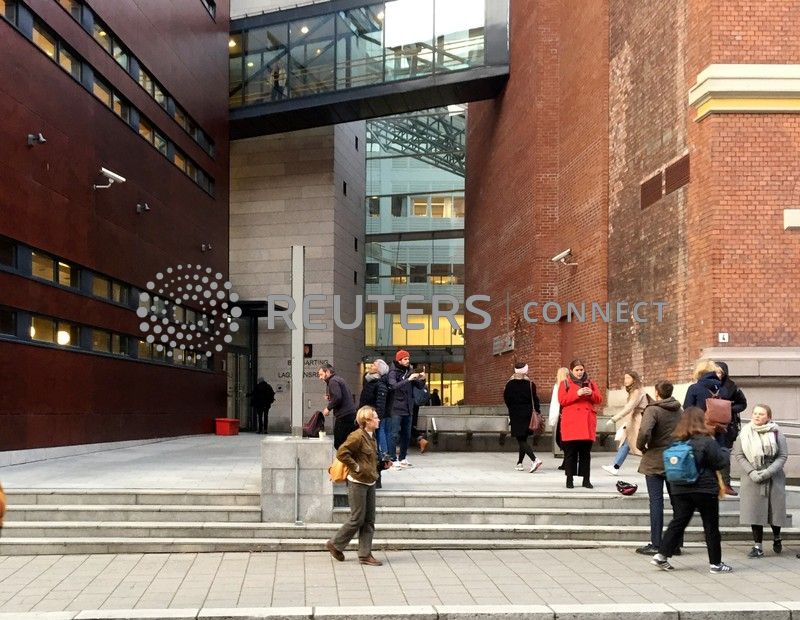 People gather next to the Borgarting Court of Appeals in Oslo, Norway November 5, 2019. REUTERS/Nerijus Adomaitis

OSLO (Reuters) – Environmental groups urged a Norwegian appeals court on Tuesday to take emissions from the country’s oil and gas exports into account when ruling on the government’s decision to allow oil firms to explore in Arctic waters in 2016.

The session follows the dismissal by a lower court of the lawsuit against the Norwegian state by Greenpeace and Norway’s Nature and Youth in 2018.

The groups argue the government’s decision contravened local and international law. They cite article 112 of Norway’s constitution, which guarantees the right of current and future generations to a healthy and sustainable environment, as well as the 2016 Paris climate agreement to limit global warming.

Cathrine Hambro, a lawyer representing the green groups, said there were already more petroleum resources discovered than could be exploited without breaching the Paris goals, which were agreed before the government granted the exploration licenses.

Attorney General Fredrik Sejersted, defending the state in the appeal, told the court the government’s decision to grant exploration rights was in full compliance with the law.

“That might be a political question, that might be a moral question, but not a legal question for this court to consider,” he told Reuters, reiterating that Norway did not have legal responsibility for emissions caused by oil and gas exported abroad under domestic or international law.

The case is part of an emerging branch of law worldwide where plaintiffs use a nation’s founding principles to make the case for curbing emissions.

A win at the appeals court, which will sit until Nov. 14, could set a precedent for other climate cases globally and limit exploration by Western Europe’s biggest oil and gas producer, the plaintiffs say.

Oil and gas amount to more than half of the value of Norway’s exports and helped build its $1 trillion sovereign wealth fund into the world’s largest.

“The government won the first case and now we will see how the (appeal) goes,” Norway oil minister Kjell-Boerge Freiberg told Reuters. “Norway will continue to drill.”

Last year, the Oslo District court said the 23rd licensing round that granted offshore exploration rights to companies including Equinor and Chevron was legal. Chevron has since left Norway.

The industry produced a quarter of Norway’s domestic greenhouse gas emissions, totaling 52 million tonnes last year, up 1% compared since 1990, according to Statistics Norway.