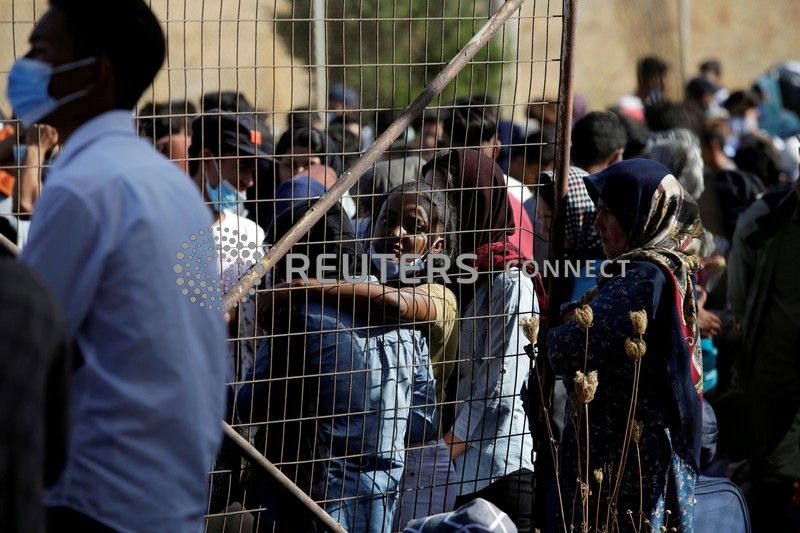 FILE PHOTO: Refugees and migrants from the destroyed Moria camp wait to board buses to the port, from where they will be transferred to the mainland, on the island of Lesbos, Greece, September 28, 2020. REUTERS/Elias Marcou/File Photo

ATHENS (Reuters) – Greek police have opened an inquiry into the activities of aid workers facilitating what authorities said were illegal entries into the country through the island of Lesbos.

Greece was on the front line of a huge surge of refugees and migrants to Europe in 2015 and 2016, many through its outlying islands close to Turkey including Lesbos. The flow has since ebbed.

Police said 35 people linked to non-governmental organisations were under investigation for providing support to traffickers ferrying migrants to the island. The workers gave information over encrypted messaging apps on assembly points on the Turkish shore and geographical coordinates of landing areas, according to the police.

“Α preliminary investigation from the prosecutor is under way. We have identified the persons involved,” a police official told Reuters without giving further details.

The names of the aid groups the individuals work for have not been disclosed. The police official said Greek intelligence services were also involved because the workers were thought to have passed on details of Greek coastguard movements.

In a statement, Migration Minister Notis Mitarachi said authorities were cooperating with many NGOs but would not tolerate NGOs “with illegal activity”.

There are about 15,000 asylum seekers on Lesbos. Earlier this month the primary processing camp, Moria, was destroyed in a fire, forcing thousands to flee. Some 9,000 have now been relocated to a temporary tent camp.