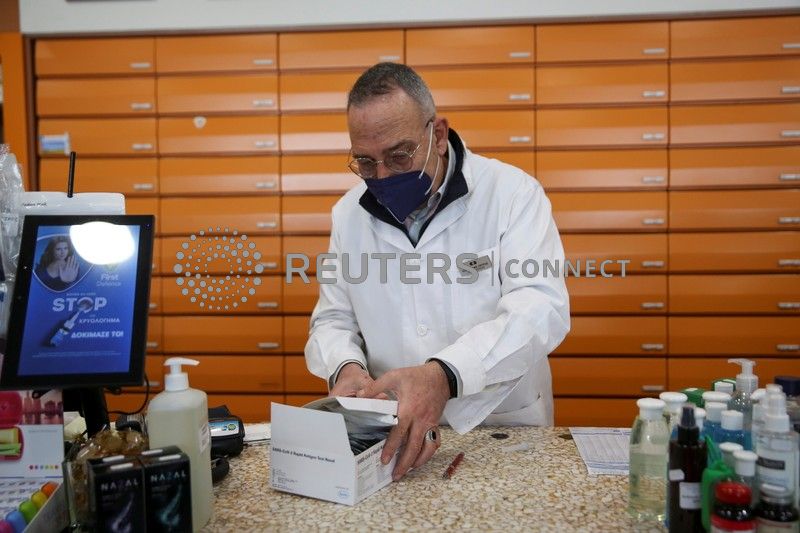 ATHENS (Reuters) – Greece will open high schools next week despite a record number of daily new cases recently, officials said on Wednesday, as the government began mass distribution of home-testing kits it hopes will help control the pandemic and reopen the economy.

With health services still under severe strain in key regions including the capital Athens, small shops were allowed to reopen under controlled conditions on Monday and authorities removed some movement restrictions in response to growing public fatigue over months of lockdown.

Greece, which coped relatively well during the first wave of the pandemic, was forced to tighten restrictions to combat a surge in cases from late last year, with hospitals around Athens and the northern city of Thessaloniki struggling to cope. More than half of all new cases each day are reported in that region.

(Open https://tmsnrt.rs/34pvUyi in an external browser to see a COVID graphic)

The free home-testing kits, initially reserved for high schools and teachers before wider distribution to all adults, began appearing in pharmacists’ shops on Wednesday.

“This is a huge project. Greece leads the way,” said Alternate Health Minister Vassilis Kontozamanis, adding that 2 million self-test kits were already available and there would be another 7 million by the end of next week.

With the vital summer tourist season fast approaching, the government is desperate to have the situation sufficiently under control to allow at least some businesses to open but the pace of vaccinations has only recently started to pick up.

“The tests will definitely help a lot,” said Petros Kassarjian, a pharmacist in Athens. “Just as the vaccines are needed, the tests are also necessary – as long as they are done properly.”