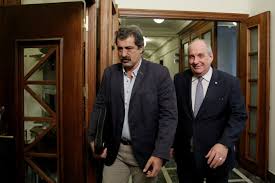 Analysts expect the government, which trails the conservative opposition in opinion polls but aspires to another term after October elections, to win the confidence motion that is set to take place on Friday.

The New Democracy (ND) party had accused deputy health minister Pavlos Polakis, a 53-year old surgeon, of insulting a wheelchair-bound conservative candidate for the European Parliament election by saying he used favorable laws to get a job in the state health sector.

“He has exceeded any democratic limit,” opposition leader Kyriakos Mitsotakis told lawmakers about Polakis, submitting a censure motion. “His example is toxic and dangerous”.

Earlier this year, Polakis was told off by a top EU health official for defying a smoking ban while dancing in a club. He has also been at loggerheads with the country’s central bank over a personal loan.

Tsipras has so far backed Polakis, though acknowledging he is sharp-tempered and has an unusual way of expressing himself.

The government squashed ND’s maneuver by replacing it with a higher-stakes vote of confidence just weeks before the European Parliament vote and parallel local elections on May 26.

“Your problem is not Polakis but Tsipras who is popular,” deputy prime minister Yannis Dragassakis told opponents in parliament as he started the procedure for a confidence vote.

Debate is expected to begin on Wednesday.

The government was also planning to submit to parliament on Monday evening a bill giving relief to millions of people who owe tax and pension contribution arrears. It is expected to announce more relief measures in the coming days.

Greece emerged from its third international bailout in August last year and has been outperforming fiscal targets agreed with its international lenders, giving the government leeway to proceed with handouts in an election year.

Censure and no confidence debates, however, could push back the legislation, Finance Minister Euclid Tsakalotos said on Sunday, calling that “a big mistake”.