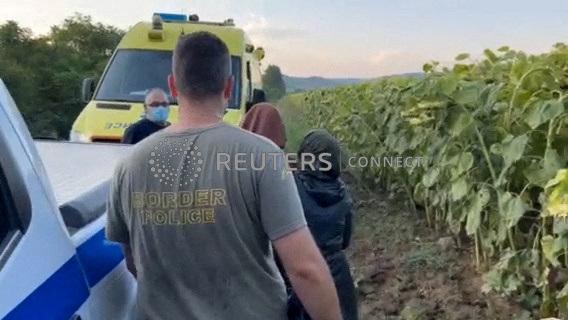 Migrants are escorted by a Greek border police officer, in the region of Evros, Greece in this screen grab from a handout video released on August 16, 2022. Citizens Protection Ministry/Handout via REUTERS

ATHENS (Reuters) – Greece will try to retrieve the body of a five-year-old girl who died on a river islet on the Greece-Turkey border where she had been among a group of migrants stranded there for several days, Migration Minister Notis Mitarachi said on Tuesday.

Mitarachi was visiting Greece’s wider Evros region a day after police there found 35 Syrians and three Palestinians, among them one pregnant woman and seven children, who had been hiding in Greek territory after crossing the river from Turkey.

Aid agencies and media reports said the child, who was from Syria and travelling with her parents and sister, had died of a scorpion sting.

Mitarachi said last week the islet on the Evros river was Turkish territory, and that Greek authorities had contacted their Turkish counterparts on the matter.

“Sadly, it appears that a girl aged five years lost her life on Turkish soil,” Mitarachi told reporters during a visit to Evros.

“We will coordinate with the International Red Cross and Red Crescent to ensure that the body of this girl is brought to Greece to be buried with dignity by her family.”

The Turkish Interior Ministry was not immediately available for comment.

According to media and activists the migrants tried to reach the Greek mainland but had been pushed back.

Mitarachi told reporters on Tuesday that the group entered Greek territory for the first time on August 14 and hid for a day. They had been previously detained by Turkish authorities and later brought to the river bank and forced to cross over, he said. On Monday, he said that a boat was found near them.

“They were threatened by Turkish police to illegally cross into the European Union. That is a push forward which is completely illegal and in breach of international law,” the Greek minister said.

The Mediterranean country was the frontline of Europe’s migration crisis in 2015 and 2016 when a million refugees fleeing war and poverty from Syria, Iraq and Afghanistan arrived, mainly via Turkey.

The number of arrivals had fallen sharply since then, but in recent months, Greek authorities said they have stopped a significant number of people from entering. In May-July Greece registered 4,126 migrant arrivals, up 113 % from the same period last year.