Greece says first migrant dies of COVID-19 since the pandemic 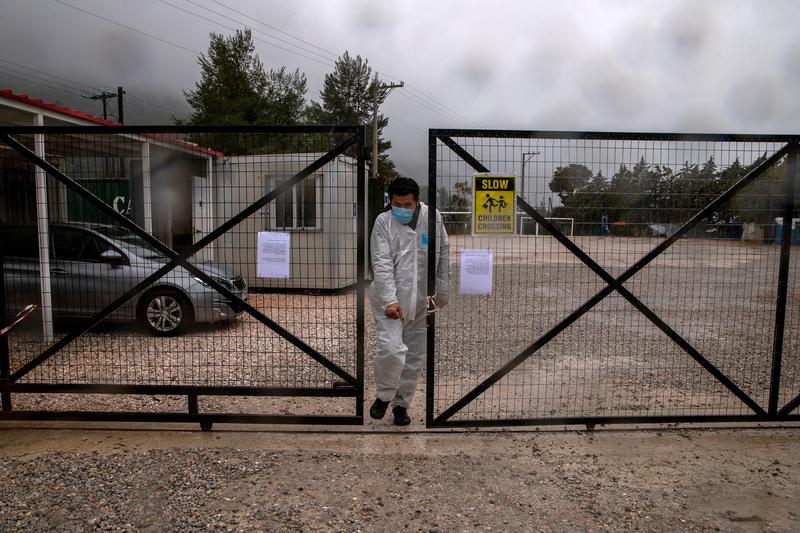 FILE PHOTO: A man wearing a protective suit and a face mask exits the Malakasa migrant camp after authorities found a coronavirus case and placed the camp under quarantine, following the outbreak of coronavirus disease (COVID-19), in Malakasa, Greece, April 5, 2020. REUTERS/Alkis Konstantinidis/File Photo

ATHENS (Reuters) – A male migrant died of COVID-19 on Sunday, the first reported death of an asylum seeker since the pandemic broke out in Greece in late February, a government official told Reuters.

The 61-year-old Afghan, a father of two children, who lived at the migrant camp of Malakasa north of Athens, was treated and died at a hospital in Athens, the official said, adding that authorities were tracing his contacts.

It was not immediately clear how long he had been at the hospital.

The Malakasa camp, which hosts about 3,000 migrants, has been quarantined since Sept. 7 after positive tests for the new coronavirus.

Many other migrant facilities in Greece have been sealed off or movement has been restricted to stem the spread of the virus.

Greece has been the main gateway into the European Union for people fleeing conflict in the Middle East and beyond. More than a million people reached its shores from Turkey in 2015-16.

At least 110,000 people currently live in migrant facilities – 40,000 of them in overcrowded camps on five islands.

A fire burnt to the ground a migrant camp on Greece’s biggest, on island of Lesbos this month, leaving about 12,000 people stranded. Most of them have now moved to a temporary tent camp on the island.

Greece reported 218 COVID-19 cases on Sunday and three deaths, bringing the total number of infections to 17,444 since the first case surfaced late February.