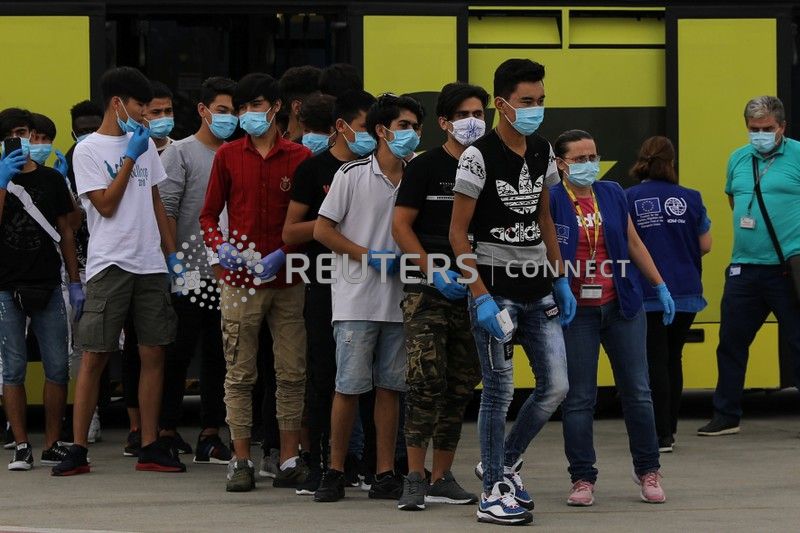 Unaccompanied refugee minors board an Aegean Airlines aircraft that will transfer them to Portugal under a European Commission-funded relocation program, at the Eleftherios Venizelos International Airport in Athens, Greece July 7, 2020. REUTERS/Alkis Konstantinidis

ATHENS (Reuters) – Greece moved 25 unaccompanied minors from overcrowded migrant camps to Portugal on Tuesday as part of a relocation programme to EU countries.

The boys, all aged between 15 and 17, had lived in refugee camps on outlying Greek islands. They have no relatives in Europe.

Hundreds of thousands of migrants and refugees fleeing conflict and poverty countries used Greece as a springboard to European countries in 2015 and 2016, when an EU-brokered accord with Turkey all but halted the flow, trapping many in Greece.

At least 5,200 migrant children from Syria, Afghanistan, Iraq and Africa currently live in Greece, many of them in harsh conditions.

Tuesday’s transfer was part of a voluntary plan to relocate minors from Greek camps to other European countries amid concerns about the impact of the coronavirus on vulnerable groups.

“Europe is doing its duty for those who have the greatest need, and require protection,” said Irene Agapidaki, special secretary responsible for unaccompanied minors at the Greek migration ministry.

She was speaking from Athens airport after bidding farewell to the children.

Another group of 25 children is expected to fly from Athens to Finland on Wednesday. Greece is in the process of relocating about 1,600 unaccompanied minors who have no family members in Europe. Some have already been sent to other countries

Deputy migration minister Giorgos Koumoutsakos said that in addition to relocating minors, authorities were also pursuing a voluntary return scheme for individuals who were in camps on the Greek islands and who had arrived by Jan. 1 2020.

Koumoutsakos said financial incentives were being offered to those interested in returning home. “We expect the first flight in this complex project to be to Iraq in coming weeks,” Koumoutsakos said.