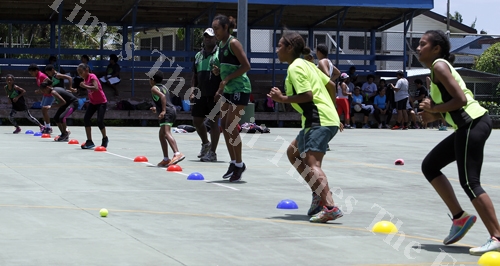 Members of the Grasshopper netball squad during training at the Netball centre yesterday. Picture ATU RASEA

EXECUTIVES of the Grasshoppers Netball Club are noticing improvements on their netball program in the grassroots level.

The club has been organising yearly programs for girls who are interested in developing their netball skills.

“We have about 100 to 200 children who come and register from January to December and the number has been growing since,” Sachs said.

“We are committed in developing the sport in students. We don’t look at the age group of the players, but on their level of skills.

“We have parents who bring in their daughters every year because they have seen the positive changes this program has done.

“We not only bring them up physically, but train them mentally and spiritually to help these girls grow into young independent women.”

Sachs said they had started conducting development programs beyond Suva and some areas outside Viti Levu.

“We have held training programs in Levuka and as far as Kadavu. We were proud of how the Kadavu team proved themselves in the primary schools netball competition.”

The club is now gearing up for the Grasshoppers Netball Tournament which will be held on December 7 and 8 at the National Netball Centre at Laucala Bay, Suva.

Teams from Australia and New Zealand will also be part of the two days competition.