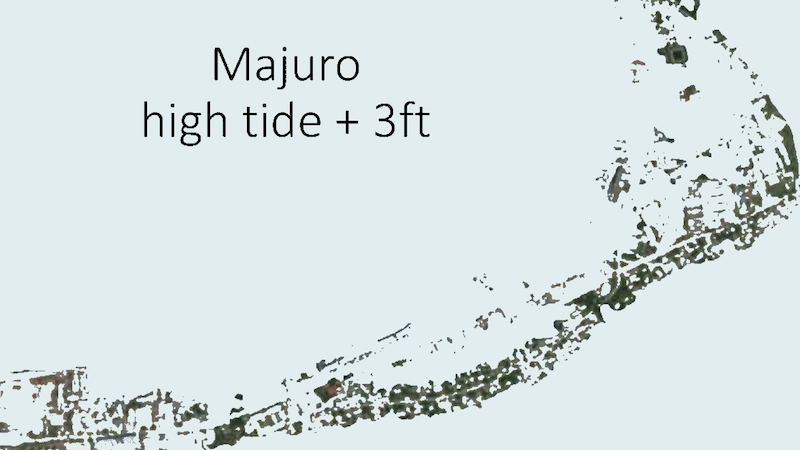 The environment minister of the Marshall Islands has just released striking new graphics that show how fast climate change may overwhelm his homeland.

The sea level rise projections were produced by researchers at the University of Hawaii, who topographically mapped Majuro to generate a specific picture of the future for the Marshall Island’s capital atoll.

“Majuro is so small that we can all see our own houses. My own house would be underwater. Everyone I love, everything I own, and every part of my history is in these islands,” says Paul.

The images showed that with a rise in sea level of 91cm (three feet), the majority of the low-lying land would become completely uninhabitable. That’s a rise in ocean levels scientists predict could occur by 2100 unless humans curb greenhouse gas emissions.

The graphics also show ranges of one and two feet (30cm and 61cm), which are well within projected rises without rapid pollution reductions.

Many of the homes of the 30,000 people who live on Majuro, as well as the entire airport, would be left completely submerged.

Darrit, the most densely populated part of Majuro atoll, which housing much of the Bikini atoll population, is also severely at risk. These people were forced to leave their original homes in the 1940s as a result of nuclear testing.

Paul has been in Europe attending ministerial meetings. “It is clear the images resonate with others too,” he says. “I printed them out and showed them to many other ministers in Europe this week. Many of them were in tears. They clearly left a big impression on the German minister [Svenja Schulze] – who is now a really close friend. And [French ecology minister] Nicolas Hulot asked me for copies so he could show them to president Macron.”

Increased flooding and droughts on the Marshall Islands are already demonstrating the reality of climate change, and the latest predictions showed the devastating impacts that will occur if sea levels continue to rise.

“What the images must also remind us though is that this is a global fight. If this happens to Majuro, the worst impacts will also be affecting everyone. No one is immune,” says Paul.

But he is convinced there is still hope. “It is not too late. This is why it is crucial we urgently increase global ambition by 2020. Our Paris targets are not enough. If these were predictions for any major power’s future, there would be a crisis summit taking place.”

The Marshall Islands launched a declaration along with 22 other countries, pledging intention to increase their climate action goals.

Paul also announced that the Marshall Islands will host a climate dialogue on 23 July in Majuro, to discuss further strategies to reduce emissions.