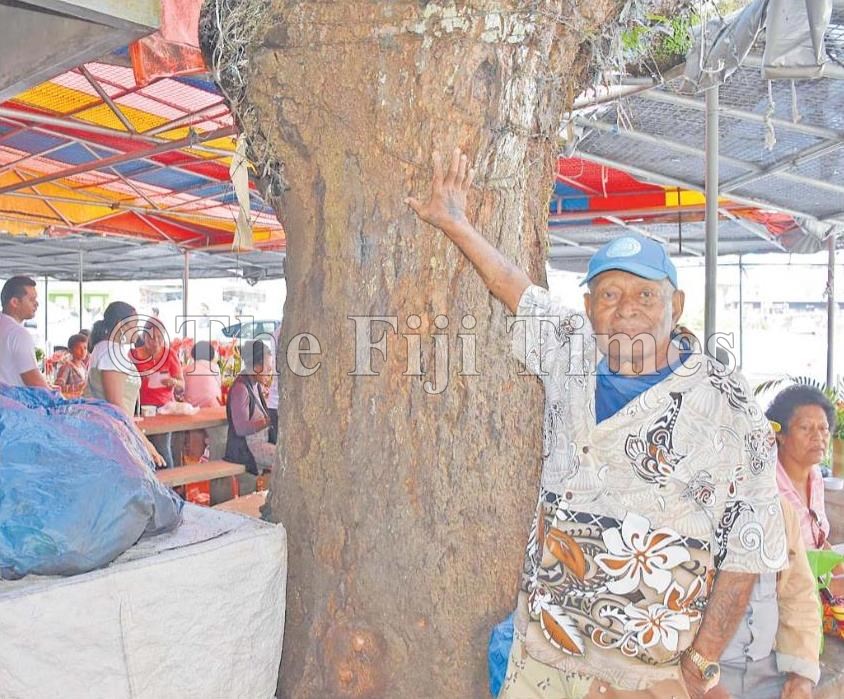 Taito Cavei stands beside the mango tree at the Suva market, which he says he planted in 1945. Picture: ATU RASEA

Taito Cavei’s decision to leave where he was brought up in Waikete Village, Tailevu, at the age of 11 — is something he never regrets.

The 92-year-old is originally from Nakuruwai Village in Noco, Rewa, but was brought up in Waikete Village. He is a man of many talents and knows a lot about the history of Suva.

Today, he owns a piece of land called Vunimoli at Tamavua-i-wai on the right side before you reach the Delainavesi Bridge just outside Suva.

Cavei said when he first came to Suva he stayed with his aunt at Valenikarisini, which is called Raojhibai Patel Street today.

“We had a small house at Valenikarisini and one day when I woke up the kerosene sprang up in front of our doorsteps.

“I took one of my aunt’s dresses and covered it and my aunt got angry and chased me away from her house. That was the beginning of my journey to the wilderness,” said Cavei.

From that time he roamed around in town and helped to level the Suva foreshore starting from the FNPF building up to the seawall at the market.

Cavei said there were no heavy machinery diggers or trucks at that time and all the men had to dig with spades.

Most of the men were from Naitasiri, Rewa and Tailevu and were employed to dig and they would joke while working. After many years they had leveled a huge area.

“I am one of the lucky guys still alive today and I thank God for so many changes I’ve come across.

“I went to Vatukoula and worked at the gold mine for three years before returning to Suva to work at the wharf.

“In 1945, I planted a mango tree in front of the Suva market where the ladies are selling flowers today,” he claimed. He is also one of the pioneers of the famous sigidrgi group

“Bua ni Lomai Nabua”, and he is the only surviving member from the group which hit the music industry in the ’70s.

Cavei lives with his wife Selai, children and grandchildren at his piece of land at Tamavua-i-wai, and he thanked the late Tui Suva for giving him that land because he was looking after their fishing grounds for the past 20 years.

To live long, his only advice to people is to eat healthy food and be happy at all times.