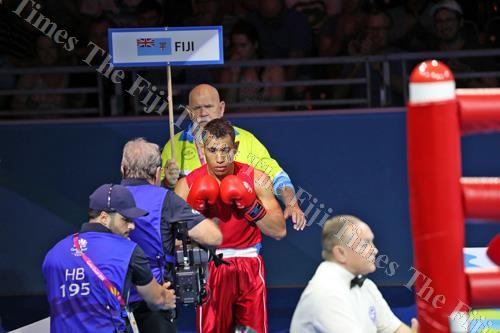 sensational Fijian amateur boxer Winston Hill is ready to reap years of hard work and is on the verge of creating history when he takes on Aidan Walsh of Northern Ireland in the first semi-final of the 69kg category boxing match at the 2018 Commonwealth Games in the Gold Coast tonight.

Hill, who works as a gym assistant here in Fiji, usually trained behind closed doors, that sacrifice has him two steps away from winning a gold medal for Fiji.

“I have been involved in boxing for 20-plus years and being a part of what we have done here is the single biggest sporting achievement of my life so I consider these games very special. We were put on the world stage to send a message and let everyone know that if you just believe, work hard and dedicate yourself, you can achieve anything no matter the circumstance,” coach Napoleon Taumoepeau said.

“Winston (Hill) has always been self-motivated. At times he just gets bored but this is entirely different.

“He has a nation behind him and knowing a victory can spark a few moments of happiness for the people back home, which is the motivation he needs.

“I will just have to make sure he stays focused and sticks to the game plan for the entire nine minutes. He is at his best when he is either the underdog or knows his opponent is very skilled and in the next match his opponent is bringing both of those to the table.

“With him, the bigger the challenge the more excited he gets and that turns into motivation.”

Taumoepeau and Hill got emotional after he won the quarter-final match against Stephen Newns of Scotland.

“I have never been so emotional after a fight and neither has he.

“Everybody sees this win, we made it look easy, they see all of the glory that comes with victory under those bright lights but there were a lot of dark moments over the years that got us here.

“We worked week in and week out for four years straight. Many people told us we could not do this, many believed boxing was dead in Fiji, he came up short in the mini games and many doubted him,” he said.

“In 2017 we had a week of break for the entire year. For years, it has been discipline, blood, sweat and tears.

“After he came up short in the Pacific Mini Games everyone forgot he had just become the first Fijian to win a silver medal in the Oceania and qualify on merit to the World Championships just a few months prior.

“We have both sacrificed a lot, our loved ones and families had to sacrifice just to deal with our hectic training schedules.

“Everything came together at one time — all of the hard work over the years paid off and the emotions that we have both held back over the past four years just came out.”