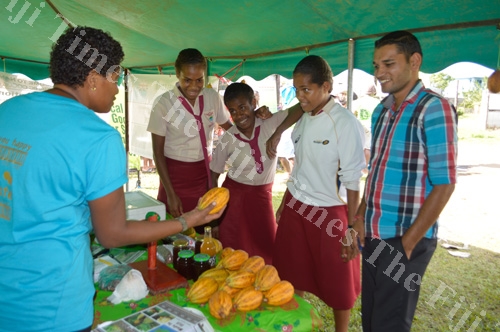 Students of Tailevu North College visit a booth during the Cocoa Day Celebration at Gatward Park in Korovou. Picture: SUPPLIED/MINISTRY OF AGRICULTURE

IN the 1880s cocoa was introduced to Fiji by the British and after World War II cocoa planting was concentrated in Tailevu, Naitasiri, Cakaudrove including parts of Ra and Nadroga/Navosa. In 1976 all dry beans were purchased by the National Marketing Authority who were then responsible for all cocoa marketing activities.

There were some policy change in governments and the impact of black pods in the 1980s and the drop in price slowed down the progress.

This was highlighted by the permanent secretary for the MInistry of Agriculture David Kolitagane during the Cocoa Day Celebration at Korovou in Tailevu last week.

“It is also interesting to note that the demand for cocoa has increased recently. As the result, the current market price has increased from $6 for a kilo to $10 for a kilo,” he said.

“Cocoa production has increased from nine metric tonnes in 2014 to 22 metric tonnes in 2017. Also the value of export for cocoa increased from $72,000 in 2014 to $144,000 in 2016. “As a result of this high demand for our cocoa in the export market, we are currently exporting to 17 destinations including vibrant markets such as Australia, Canada, France and the United States of America to only name a few.”

He said for cocoa farmers, cocoa product in recent year had slightly decreased.

“In previous years, according to certain plans put in motion, cocoa production had only reached 3000 tonnes from 2010, from that decline in production during that period until last year I’m happy to note that in 2017 cocoa production in 2017 had increased to 22,000 tonnes for the whole of Fiji,” he said.

“I can say that from the 22,000 tonnes produced last year, I can confidently say that in three to five years from now we can double the production. “In terms of the financial side of things regarding cocoa, we’ve noticed that cocoa is one commodity that has very good returns for farmers.

“Cocoa is one commodity from which you can earn a good living as you can earn double the amount of money if you take care of your farm and should you have any issues, ministry staff are always on hand to offer technical advice.

“Since 2013, our import bill for cocoa-related products was $7 million, products that were in hotels and supermarkets and in 2016 our cocoa import bill was $9m so that indicates that the demand for cocoa in Fiji exists, something the local industry is failing to meet and I am hoping that we can change this.”

He said Government was adamant to revive the cocoa industry and the Cocoa Development Program would continue to support cocoa clusters and individuals.

“As a result, Government continued to increase funds allocated for Cocoa Revitalisation Program from $300,000 in 2014 to $550,000 in the current financial year and a similar amount is proposed in the next financial year.”

Tailevu Cocoa Growers and Producers Co-operative Association chairman Tevita Niuvou said he, like many who attended the celebration, was so happy with the Cocoa Development Program.

Mr Niuvou said it was great to see that doors were opening to development in the cocoa industry.

“There are 92 registered members in the 12 districts of Tailevu and this program will help farmers and it has been an eye-opener for them in terms of developing their farm now,” he said.

“We can produce 26 different products from cocoa which is a big thing and so it’s gold in some ways. We hope we can revive the industry and restore it to a very productive industry in Fiji.” Many cocoa farmers and producers were part of the Cocoa Day Celebration in Tailevu last week.