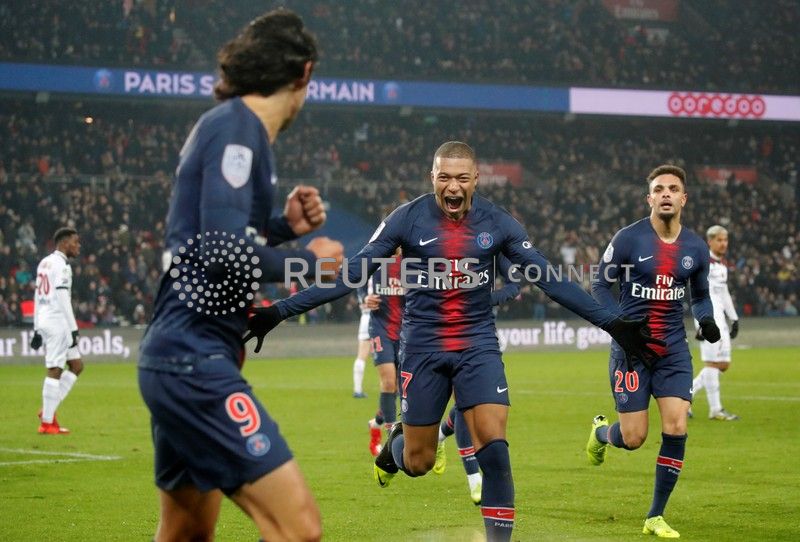 PARIS (Reuters) – Runaway Ligue 1 leaders Paris St Germain avenged their League Cup loss to Guingamp by demolishing the Brittany side 9-0 at home with an almost perfect performance on Saturday.

The capital side prevailed through trebles by Edinson Cavani and Kylian Mbappe, a Neymar double and a Thomas Meunier goal.

The one sour note for PSG, however, was an injury to Marco Verratti, who left the pitch after 13 minutes when a Guingamp player stepped on his ankle.

“I think it is serious,” said PSG coach Thomas Tuchel about the Italy international’s injury.

“He could be out for a few weeks.”

There was another injury scare a few minutes later when Neymar stepped off the field holding his thigh, but the Brazilian came back on and finished the match, helping PSG stretch their Ligue 1 lead to 13 points with two games in hand.

Things went from bad to worse for Monaco, who slumped to a 5-1 home defeat to RC Strasbourg after being reduced to 10 men following a red card for Naldo in the seventh minute.

Thierry Henry’s side, who have not won at home in the league this season, are second from bottom on 15 points.

Nine days after being knocked out of the League Cup quarter-finals with a 2-1 defeat by Guingamp at the Parc des Princes, PSG were on fire and came close to claiming the largest home win in the French top flight.

Neymar opened the scoring in the 12th minute after collecting a superb through ball from Dani Alves, beating Marc-Aurele Caillard from close range.

Mbappe made it 2-0 eight minutes before the break with a cool finish after a one-two with Neymar.

The France striker doubled his tally on the stroke of halftime after Cavani dispossessed Felix Eboa Eboa in the box.

The Uruguay striker made it 4-0 in the 59th minute when he tapped in from Juan Bernat’s cross.

He added another eight minutes later from Angel Di Maria’s cross, and only two minutes later, Neymar, perfectly set up by Mbappe, found the back of the net again.

Guingamp’s ordeal was far from being over, though.

Cavani beat Caillard when he tapped in from Layvin Kurzawa’s cross in the 76th, five minutes before Mbappe also grabbed his hat-trick after collecting his Uruguayan team mate’s through ball.

Defender Meunier rounded off the humiliation with a shot from inside the box.

Mbappe, Neymar and Cavani have now netted a total of 44 goals in Ligue 1 with the Frenchman leading the scoring charts with 17 goals.