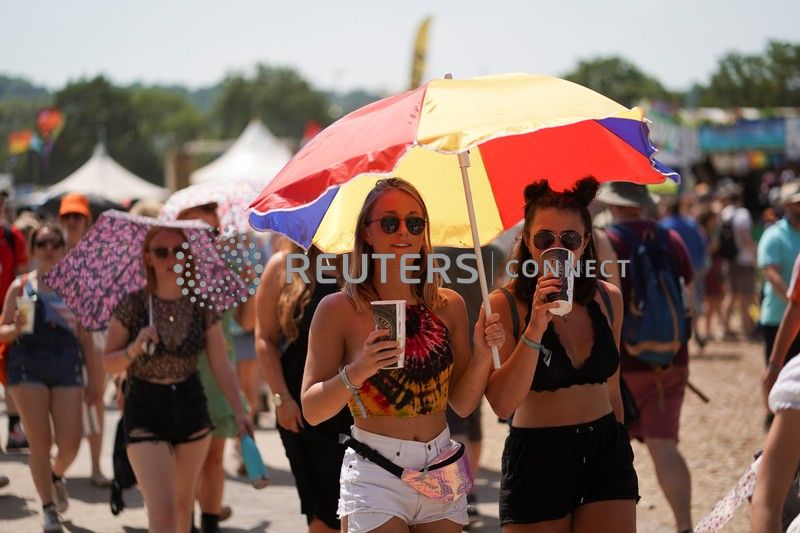 GLASTONBURY, England (Reuters) – Britain’s Glastonbury Festival is greener and cleaner after banning the sale of single-use plastic bottles in the hope of inspiring long-term change – even in the middle of a heatwave that forced some music fans to queue for water.

Ticket holders were encouraged to bring their own reusable bottles or to buy a metal canister, which could be refilled at water stations around the site.

Long queues formed at some locations as people tried to keep hydrated in blazing sunshine at Worthy Farm in southwest England on Friday and on Saturday, as the temperature hit 25 Celsius (77 Fahrenheit).

But most festival-goers remained good natured and said they supported using less plastic. About 1 million single-use plastic bottles were sold on site in 2017, organizers had said.

“We’ve never once not been able to fill up, and it’s lovely ice-cold water – so what else would you want?” said Amanda Hawkins from Bristol. “So – no problem at all.”

Glastonbury has an on-site recycling facility, which for eight days processes the waste created by up to 200,000 people, making it Europe’s largest temporary recycling center.

Recycling center manager Andy Willcott said the impact of the plastic bottle ban had been much greater than expected.

The volume of plastic and cans sent for recycling were previously about equals, but this year it was four loads of cans to one of plastics.

“There has been a little bit of a shift to cans, but not enough to compensate for the (drop in) plastic,” he said.

As Glastonbury can control what traders sell and ask ticket holders not to bring items like glass, the quality of the material recycled is high, he added. Only around 1% of everything that comes into the center cannot be recycled at all.

Four teams of 100 volunteers sort the waste, and all receive a sought-after festival ticket in return.

The biggest category collected on site was unsurprisingly beer and cider cans, Willcott said, but it can also cope with a host of other items including ampoules of nitrous oxide or laughing gas.

Up to 10 bins of the small silver flasks had been recycled since Thursday, although the trend for inhaling the gas appeared to have peaked as collections were down this year.

“What we would like to see is change … We have to get to the point where people are reusing, and recycling isn’t an issue any more.”