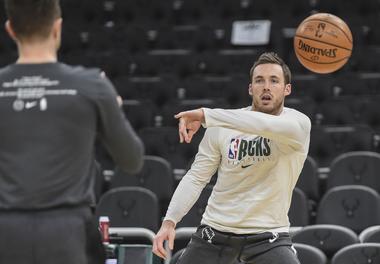 GIANNIS Antetokounmpo recorded a triple-double with 28 points, 14 rebounds and 10 assists, and the Milwaukee Bucks cruised to a 111-98 win over the visiting Chicago Bulls on Monday evening.

Khris Middleton added 24 points on 10-for-13 shooting for Milwaukee, which won its seventh game in a row. The Bucks improved to 21-2 on their home court and completed a four-game sweep of the Bulls in the regular season.

Zach LaVine scored 24 points to lead the Bulls, who have lost nine of their past 12 games. Kris Dunn had 15 points, and Thaddeus Young finished with 14 points off the Chicago bench.

Antetokounmpo’s triple-double was his fourth of the season and the 18th of his career. It was his first against Chicago.

Milwaukee started the fourth quarter on an 11-4 run to make it 95-81 with 8:45 remaining. Bucks guard Kyle Korver stung his former team with a 3-pointer during the run and finished with 12 points off the bench.

Chicago trailed 84-77 at the start of the fourth quarter. Rookie guard Coby White got hot in the final minute of the third quarter as he drained a 3-pointer and made a pair of free throws.

The Bucks opened the second half on a 23-9 surge to increase their lead to 76-61 with 4:33 remaining in the third quarter. Middleton scored 10 of the Bucks’ points during the run, including a 3-pointer and a pair of layups.

The Bulls established an early 13-9 lead before Milwaukee went on a 14-0 run to pull ahead 23-13 with 2:20 left in the first quarter. Antetokounmpo scored the first five points during the run, which also included slam dunks by Middleton and Dragan Bender and a 3-pointer by Ersan Ilyasova.