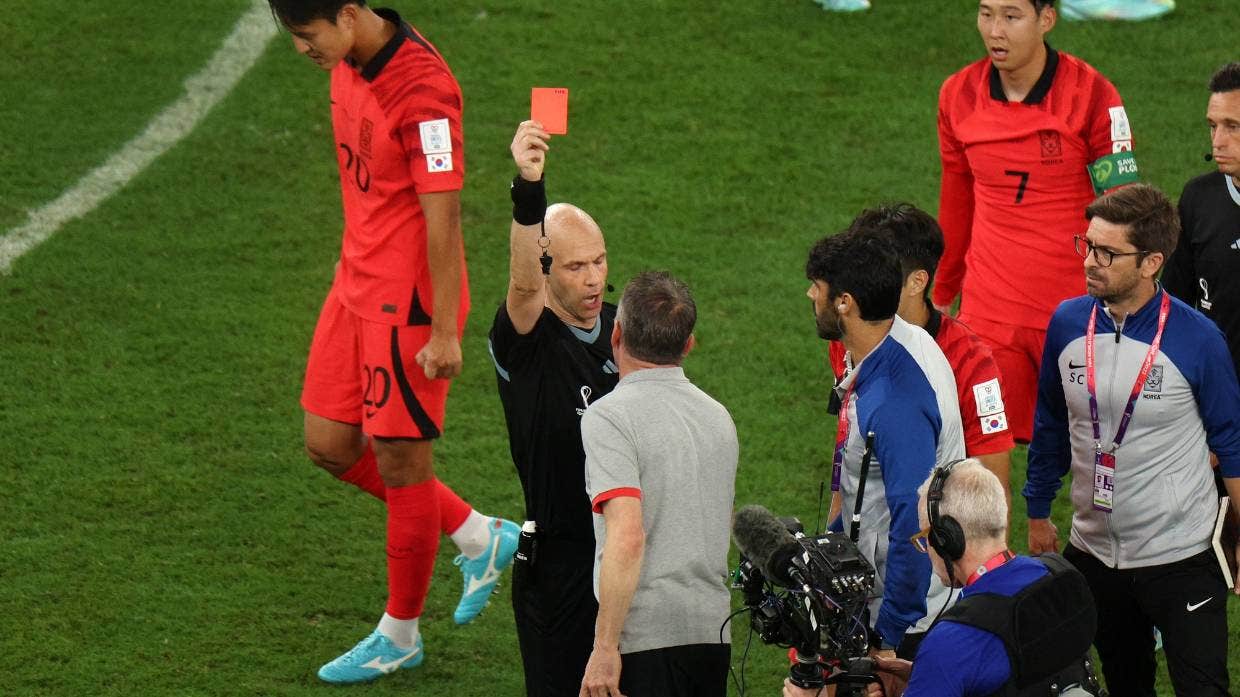 South Korea coach Paulo Bento is shown a red card at the end of their World Cup match against Ghana. Picture: STUFF SPORTS.

Mohammed Kudus said there wasn’t much difference between the way Ghana played in its opening World Cup match against Portugal or its second game against South Korea.

Except the result, of course.

Kudus scored twice, including the go-ahead goal after the South Koreans evened the match in the second half, and Ghana staved off elimination with a 3-2 victory on Tuesday.

Mohammed Salisu also scored for the Black Stars, who were disappointed after a close 3-2 opening loss to Cristiano Ronaldo and Portugal and were in need of points against South Korea for a chance to reach the knockout round in Qatar.

“I think the game against Portugal was one of the best games you can have. The energy and the commitment from the whole team was good. So we approached this game the same way,” Kudus said. “

Down 2-0, Cho Gue-sung scored both of South Korea’s goals about three minutes apart early in the second half to even the game at 2-2.

But Kudus’ low left-footed goal in the 68th minute sailed out of the reach of goalkeeper Kim Seung-gyu to give the Black Stars back the lead. Ghana goalkeeper Lawrence Ati-Zigi preserved the victory with a leaping save off Cho’s attempt in stoppage time.

“We conceded goals a bit early in the game, and that forced us to play a chasing-style game that wasn’t easy. After the first half, we vowed to keep trying until the end,” Cho said.

“We never gave up and eventually caught up (to them), but the last goal we conceded was regrettable. We kept pounding for an equaliser but couldn’t break through.”

South Korea forward Son Heung-min remained without a goal in Qatar. The Tottenham forward wore a mask to protect a broken left eye socket he sustained in a Champions League game against Marseille earlier this month.

South Korea coach Paulo Bento was handed a red card in the moments following the match after a heated exchange with English referee Anthony Taylor. The Portuguese coach was furious when South Korea won a corner at the end of 10 minutes of stoppage time but the whistle was blown before it could be taken.

The red card means that Bento will not be on the sideline for South Korea’s final match against Portugal on Saturday.

Assistant coach Sergio Costa said “the result at the end was totally unfair” and added that he did not hear Bento say anything “inappropriate.”

South Korea played to a 0-0 draw in its opener with Uruguay. The team was making its sixth straight World Cup appearance.

But now the South Koreans are in danger of elimination. Costa suggested the anger of Bento would unite the team.

“Count on us for the next match,” he said.

Ghana became the third African nation to make it to the World Cup quarterfinals at the 2010 tournament. Black Stars captain Andre Ayew was also on that squad. No African team has reached the World Cup semifinals.

Known for its controlled possession, South Korea dominated the first 20 minutes. Ghana broke through in the 24th when Salisu scored in a scramble in front of the net off a free kick. After a spirited celebration encircled by his teammates, Salisu nervously crouched on the field while the goal was confirmed by video review.

Kudus, a 22-year-old midfielder for Ajax, doubled the lead with a header off a long cross from Jordan Ayew, despite the desperate efforts of defender Kim Jin-su.

Cho did a knee slide in front of South Korea’s bench and was dogpiled by his teammates after his first goal in the 58th minute. His second came in the 61st.

Now Ghana turns to its Group H finale on Saturday against Uruguay.

“It feels good, but it feels even better because we got the whole three points. That was the most important thing,” Kudus said.

“The whole team played their part and I think the energy is very good now in Ghana and it’s a good boost for our next game.”