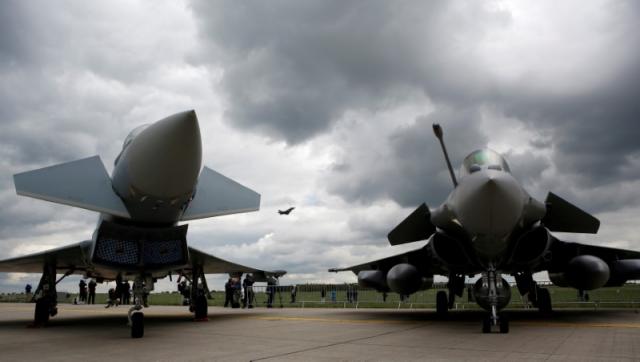 BERLIN (Reuters) – Germany is pressing Washington to clarify whether it would let the Eurofighter Typhoon carry nuclear bombs as part of shared Western defenses, an issue that could help decide whether Berlin orders more of the jets, sources familiar with the matter said.

Although not a nuclear power, Germany hosts some U.S. nuclear warheads under NATO’s nuclear-sharing policy and operates a number of Tornado warplanes that can deliver them. New jets will need to be certified by Washington to carry out nuclear missions, a process which can take years.

Germany’s defense ministry sent a letter to the U.S. Defense Department in April asking whether certification of the European jets was possible, how much it would cost, and how long it would take, the sources told Reuters on condition of anonymity.

Top U.S. Air Force and Pentagon officials are working to respond to the German query, the sources said.

The multi-billion-euro tender to replace Germany’s fleet of 89 Tornados, which are due to retire in the middle of the next decade, pits the Typhoon against several U.S. contenders at a time of strains in transatlantic ties.

Executives with Airbus (AIR.PA), Lockheed Martin (LMT.N) and Boeing (BA.N) are making presentations to the defense ministry this week after submitting reams of information on their respective warplanes in April, with the formal launch of the competition expected later this year, industry sources said.

The German defense ministry declined comment on the issue.

Lockheed’s radar-evading F-35 fighter is already slated to have the nuclear capability in the early 2020s, while the Eurofighter would still need certification.

Airbus has said it is confident Eurofighter – a joint project with Britain’s BAE Systems (BAES.L) and Italy’s Leonardo (LDOF.MI) – could be certified by 2025. Sources familiar with the Eurofighter said it was possible to reconfigure the European jet to carry nuclear bombs.

But U.S. government sources say that schedule is ambitious given that the F-35 and other aircraft must be certified first. Washington has suggested it could take 7-10 years to certify the Eurofighter for nuclear missions, well beyond the Tornado’s retirement date, according to one German military source.

While urging Europe to boost defense spending, U.S. officials are worried about being shut out of European defense projects after 25 EU governments signed a pact in December to fund, develop and deploy armed forces together. [nL2N1QH1P6]

U.S. officials will also weigh whether the Eurofighter could survive a mission into enemy territory to drop a nuclear bomb without stealth capability at a time when Russia and other potential future enemies have bolstered their sensors and air defenses, a second source said.

The F-35 is the only aircraft in the running that has such radar-evading capabilities, but Boeing and Eurofighter argue that their aircraft can work in tandem with jamming equipment.

Volker Paltzo, chief executive of Eurofighter Jagdflugzeug GmbH, told Reuters this week that he remained confident that Eurofighter could take over the roles of the Tornado, and the company had a strategy to deal with a length certification process.

He said the Tornado had been successfully recertified several times after major upgrades.