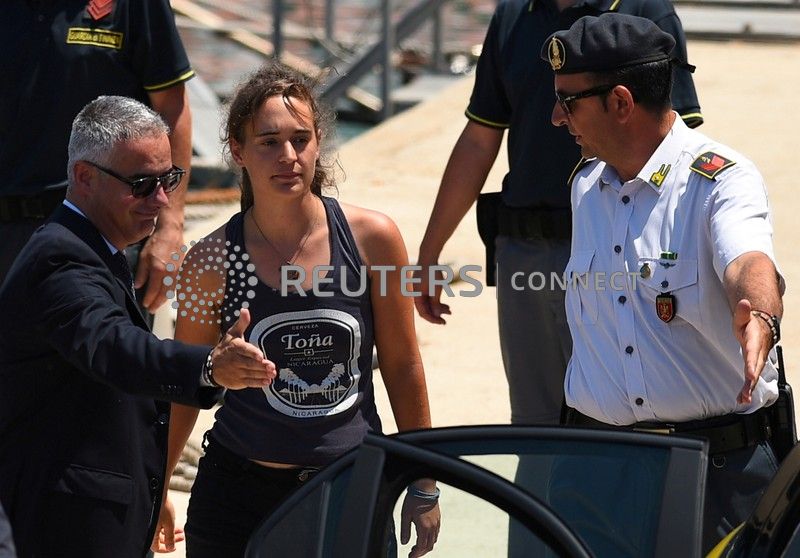 BERLIN (Reuters) – The German captain of a rescue charity ship who angered Italy’s interior minister by bringing African migrants to an Italian island has received threats and been moved to a secret location, the charity she works for said.

An Italian judge on Tuesday ordered 31-year-old Carola Rackete released from house arrest where she had been held since Saturday, when she disobeyed Italian military orders and entered the port of Lampedusa.

Rackete had faced up to 10 years in prison on possible charges of endangering the lives of four policemen for hitting a patrol boat at the quay as she brought around 40 African migrants to land in the Sea-Watch vessel.

“There were some general threats against Carola,” a spokesman for Sea-Watch, a German charity, said on Wednesday. “That’s why we moved her to a secret place. We will not comment on any further travel plans of her,” he added, speaking English.

In a statement released by the charity, Rackete called the decision by Judge Alessandra Vella “a great victory of solidarity towards all migrants, against the criminalisation of those who want to help them.”

Vella ruled that the captain had not broken the law by crashing through a naval blockade, saying that by bringing rescued migrants to port she was carrying out her duty to protect life.

Far-right Interior Minister Matteo Salvini said he was “disgusted” by the ruling. His League party last month introduced rules effectively closing Italy’s ports to rescue ships, threatening transgressors with fines of up to 50,000 euros ($56,500) and the impounding of their vessels.

The controversy over Rackete’s actions has dented relations between Italy on one side and Germany and France on the other, and highlighted Europe’s continued failure to adopt a coherent strategy on immigration.

Rackete appeared before a court in Agrigento on Monday and apologised for hitting the patrol boat, saying it had been an accident and that her sole concern was the well-being of the migrants who had been at sea for more than two weeks.

The captain, who sports long, distinctive dreadlocks, has become a heroine to human rights campaigners.

An online campaign to help her launched by two German TV stars has so far raised close to 1 million euros, while a separate fundraiser launched on Facebook by an Italian group collected 435,000 euros in seven days.

“I am moved by the solidarity of so many people,” Rackete said in her statement.

Sea-Watch said the money would be used to fund future rescue missions.