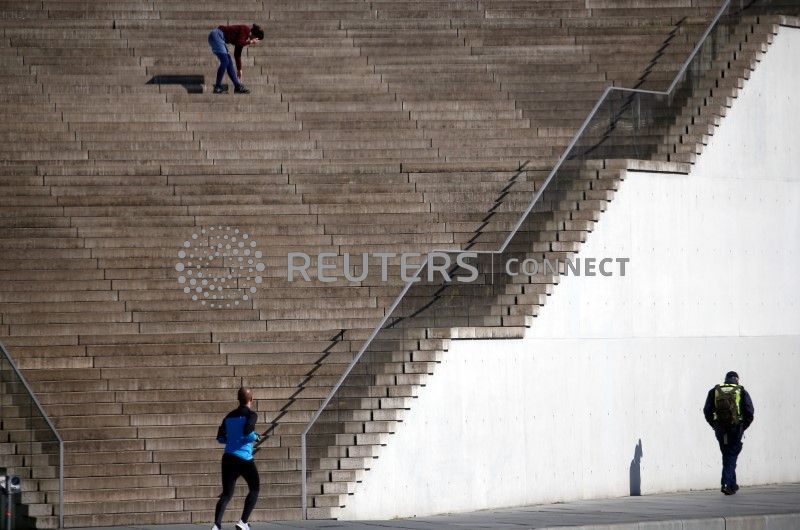 People spend their time outside in Berlin, Germany, March 25, 2020 as the spread of the coronavirus disease (COVID-19) continues. REUTERS/Michele Tantussi

WALDKIRCHEN, Germany (Reuters) – A German distillery is giving away pure alcohol it normally uses to make liquor to hospitals and clinics desperate for disinfectants now in short supply due to the coronavirus outbreak.

Germans have been stockpiling disinfectants as well as soap, toilet paper and pasta since early March in anticipation of stricter movement restrictions to slow the spread of the virus, ignoring politicians’ reassurances that supplies are secure.

“We can’t make disinfectants because we don’t have a licence,” said Stefan Penninger, of the Penninger Distillery in the Bavarian town of Waldkirchen. “But we are getting a lot of queries from clinics, pharmacies and doctors who want to make disinfectants out of our alcohol.”

Distilleries in other countries in Europe and beyond have also turned to providing alcohol-based sanitisers to hospitals struggling to cope with the coronavirus pandemic.

In the first week of March, sales of disinfectants in Germany shot up by more than 750% compared with the average weekly figure in the previous six months, the Federal Statistics Office said on Wednesday.

Sales then fell sharply in the second and third weeks of the month as the product sold out.

Penninger said his distillery had suspended production of spirits like whisky because it was giving away its pure alcohol supplies to hospitals, but fretted that a delivery of 10,000 litres of 80% proof alcohol might be the last for a while.

“This should last until the middle of the week and after that we will run out of stock,” said Penninger, sampling a sip of gin, the only spirit still in production.

“It is at the moment unclear if and when we will have new deliveries.”