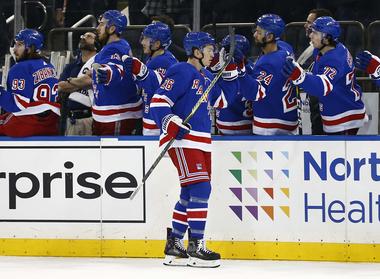 Alexandar Georgiev celebrated his 23rd birthday with a career-high 55-save performance and the New York Rangers beat the visiting Toronto Maple Leafs 4-1 on Sunday night.

According to Hockey-Reference’s game finder, it was the seventh time in 32 regular-season games that the Rangers allowed at least 50 shots and the first time they allowed 50 shots in a home win since Jan. 13, 1993, against Washington.

Georgiev did some of his finest work during four Toronto power plays, when he made 23 saves. Seven were during the first man advantage early in the opening period when he made three point-blank stops on John Tavares.

Georgiev made 12 saves on Nazem Kadri and eight on Tavares in a game the Rangers never trailed.

Mika Zibanejad and Jimmy Vesey scored in the first period for the Rangers, who snapped a four-game losing streak to Toronto. Defenseman Adam McQuaid added insurance in the third period, and Kevin Hayes scored into empty net.

Kasperi Kapanen scored the lone goal for the Maple Leafs, who were unable to match a season high with their fifth straight win.

According to Hockey-Reference, it was the 41st regular-season game Toronto had at least 50 shots and the third time against the Rangers.

The Rangers scored 28 seconds in thanks to a strong effort by their top line. Chris Kreider forced a turnover by Morgan Rielly and dished to Mats Zuccarello, whose two point-blank shots were stopped, before Zibanejad smothered the rebound and lifted a wrist shot from the left circle into the net for his 11th goal in 10 games.

Toronto registered 12 straight shots after falling behind and tied the game when Kapanen intercepted a cross-ice pass by Tony DeAngelo near the blue line in the Rangers offensive zone. Upon gaining possession, he beat DeAngelo and scored his first goal in 10 games on a breakaway with a wrist shot over the right arm at the 10:35 mark.

New York took a 2-1 lead with 5:55 left in the first period when Kreider emerged from the penalty box and made a cross-ice pass to Vesey, who timed the puck over the right shoulder of Toronto goalie Garret Sparks.

McQuaid added insurance with 8:01 remaining in the third with a slap shot from the left point through traffic after Zuccarello used his stick to deflect an errant clearing attempt by Jake Muzzin behind the New York net.