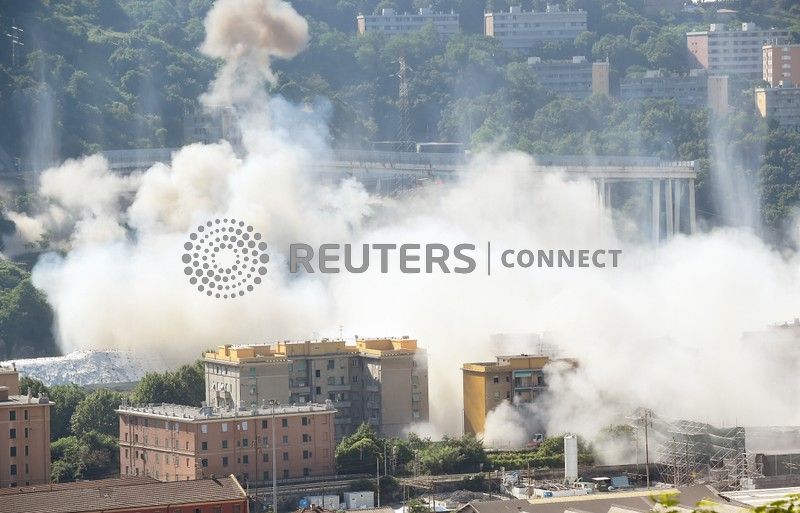 Dust settles after controlled explosions demolished two of the pylons of the Morandi bridge almost one year since a section of the viaduct collapsed killing 43 people, in Genoa, Italy June 28, 2019. REUTERS/Massimo Pinca

GENOA, Italy (Reuters) – Italian engineers on Friday blew up the looming remnants of a motorway viaduct in the northern city of Genoa whose collapse last August killed 43 people.

In a few seconds, the remains of the 1.2 km (1,300-yard) elevated road that had connected the port city with southern France fell to the ground with a roar, sending up clouds of cement dust and prompting scattered applause from onlookers.

Genoa mayor Marco Bucci said the controlled demolition had gone to plan, after a short delay to check on a report that someone might have been holed up in an abandoned apartment block nearby.

A section of the viaduct, built in the 1960s with reinforced concrete and strengthened in the 1990s, gave way on Aug. 14, sending cars and trucks hurtling 50 metres to the ground.

The explosions centred on two pylons holding up the surviving spans of the viaduct as cannons shot water over the 20,000 cubic metres of steel and concrete to prevent the clouds of dust engulfing the city.

The collapse made access to Genoa’s busy port more difficult and has also meant a lengthy detour for drivers heading to southern France.

The government of the anti-establishment 5-Star Movement and the right-wing League wants it rebuilt quickly, hoping to signal a departure from the corruption and inefficiency that have often plagued Italian infrastructure projects.

“Today not only the old bridge comes down, but the new one starts to rise,” Salvini said.

The reconstruction was assigned to the Italian firms Salini Impregilo <SALI.MI> and Fincantieri <FCT.MI>. Designed by the renowned Genoa-born architect Renzo Piano, the new viaduct is due to be inaugurated by the middle of next year.

It remains unclear whether the government will keep its promise to revoke the concession of toll road operator Autostrade per l’Italia, a unit of infrastructure group Atlantia <ATL.MI>, which was in charge of the bridge’s maintenance.

Rome has accused the operator of neglecting the upkeep of the bridge. Autostrade has denied wrongdoing, saying regular, state-supervised inspections had indicated the viaduct was safe.