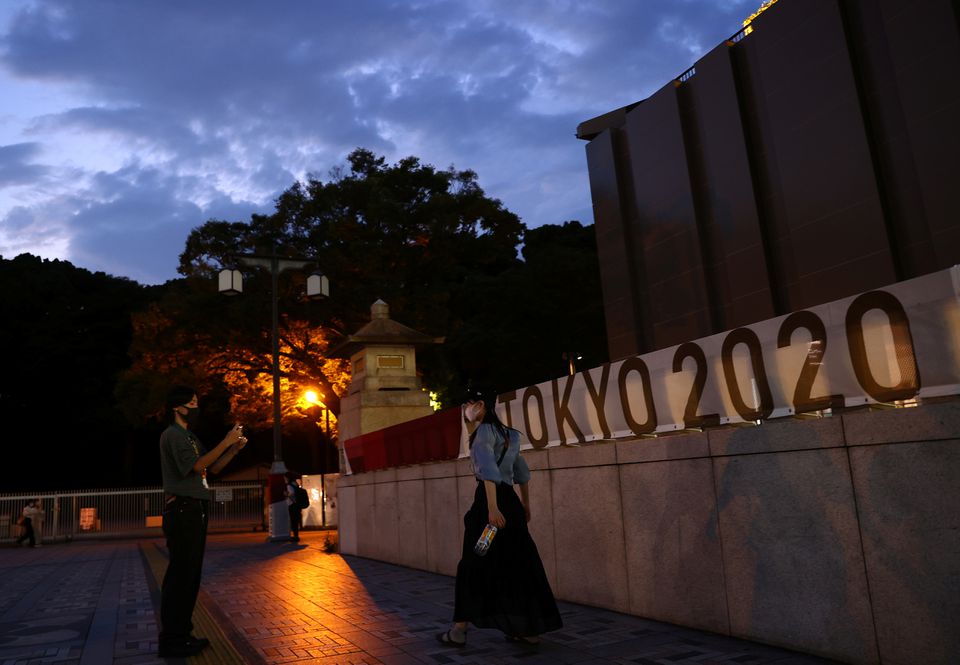 A couple wearing protective masks, amid the coronavirus disease (COVID-19) outbreak, takes a photo in front of a banner of Tokyo 2020 Olympic Games in Tokyo, Japan, July 28, 2021. REUTERS/Kim Kyung-Hoon

Two people attending the Tokyo Olympics from overseas have been hospitalised with COVID-19, a Tokyo 2020 spokesperson said on Thursday, amid concerns the Games will add to the strains on Japan’s medical system.

Neither case is serious and a third hospitalised person has already been discharged, spokesperson Masa Takaya added.

The athletes and other attendees who have flooded into Tokyo from around the world for the July 23-Aug 8 Games are subject to a strict testing regime to identity and isolate positive cases.

The capital city is in a state of emergency with coronavirus infections at a record high.

Organisers declined to provide further details on the cases citing privacy concerns. They announced 24 new Games-related COVID-19 infections on Thursday including three athletes, bringing the total to 193 since July 1.

The disclosure came as Japan’s top medical adviser urged the government to send a “clearer, stronger message” about the growing risks from the pandemic, including to the medical system.

“The biggest crisis is that society does not share a sense of risk,” top medical adviser Shigeru Omi told a parliamentary panel. “The numbers (for Tokyo) surpassed 3,000 and this may have some announcement effect. Without missing this chance, I want the government to send a stronger, clearer message.”

The hospitalisations and infection spike add to worries about the Games, which are taking place under unprecedented conditions including a ban on spectators in most venues.

The surge also spells trouble for Prime Minister Yoshihide Suga, whose support ratings are at their lowest since he took office last September, ahead of a ruling party leadership race and a general election this year.

Omi said vaccinations would help contain the virus, but many more factors threatened to cause further rises in infections including the prevalence of the highly transmissible Delta variant, weariness of restrictions, and the Olympics.

Only 26.5% of residents of Japan are fully vaccinated and the rollout has hit supply snags recently. More than 60% of Tokyo hospital beds available for serious COVID-19 cases were already filled as of Tuesday, city data showed.

Many Japanese have worried the influx of athletes and officials for the Games will add to the surge, while experts have warned that holding the high profile sports event sends a confusing message about the need to stay home.

Olympic athletes, staff and media must follow strict rules to prevent any spread of the virus from inside an “Olympic bubble”.

Tokyo is under its fourth state of emergency set to run through the Olympics, but the mostly voluntary measures have proven less effective than in the past.