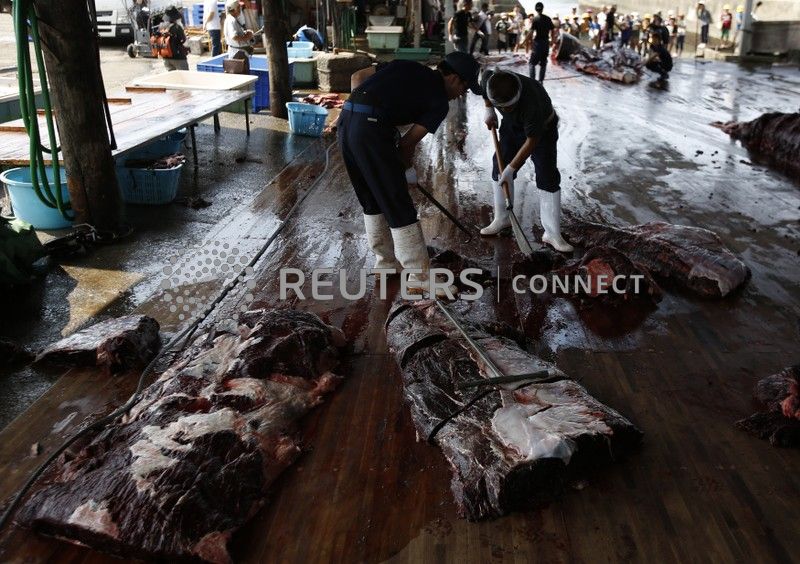 TOKYO (Reuters) – Environmentalists from around the world urged global leaders at the G20 summit on Friday not to “turn a blind eye” to what they called a “cruel assault on whales” planned by host Japan when it restarts commercial whaling next week.

Japan is withdrawing from the International Whaling Commission (IWC) on Sunday and resuming commercial whaling a day later after roughly three decades, during which its widely reviled “scientific research” whaling programme was decried by opponents as commercial whaling in disguise.

“This week, while one part of the Japanese government is proudly facilitating international cooperation by hosting the G20 meeting, another is quietly extricating itself from the obligation for global collaboration on the protection and management of the world’s whales,” said Kitty Block, president of Humane Society International, in a statement.

“Japan leaving the IWC and defying international law to pursue its commercial whaling ambitions is renegade, retrograde and myopic….”

Block and others, including anthropologist Jane Goodall, are calling for an “international whaling intervention” to be staged at the meeting in the western city of Osaka, and letters have been sent to all G20 leaders urging them to tell Japan it is out of step with the world and call for an end to all commercial whaling, the statement added.

“World leaders meeting in Japan this week should not turn a blind eye to the cruel assault planned on whales of the North Pacific,” Block said.

Tokyo, which maintains many whale species are not endangered and that eating whale is a cherished cultural tradition, is halting the Antarctic research whaling that took some 330 minke whales a year, but will hunt minkes, sei whales and Bryde’s whales in its exclusive economic zone.

Japan has yet to announce its hunt quota, but many in the industry believe the number taken will fall between the 180 minkes and sei whales taken in the Northern Pacific and the 330 minkes hunted in the Antarctic. Some Japanese media have said the announcement is being delayed to avoid trouble at the G20 meeting, but industry experts deny this.

Consumption of whale peaked in the early 1960s and has been diminishing ever since. Barely 300 people are directly connected to whaling, and whale represented only about 0.1 percent of Japan’s total meat consumption in 2016.

The prospect of growth in the industry is far from certain, both environmentalists and whaling advocates say, but Prime Minister Shinzo Abe, whose district includes a major whaling centre, has long pushed to resume commercial whaling.