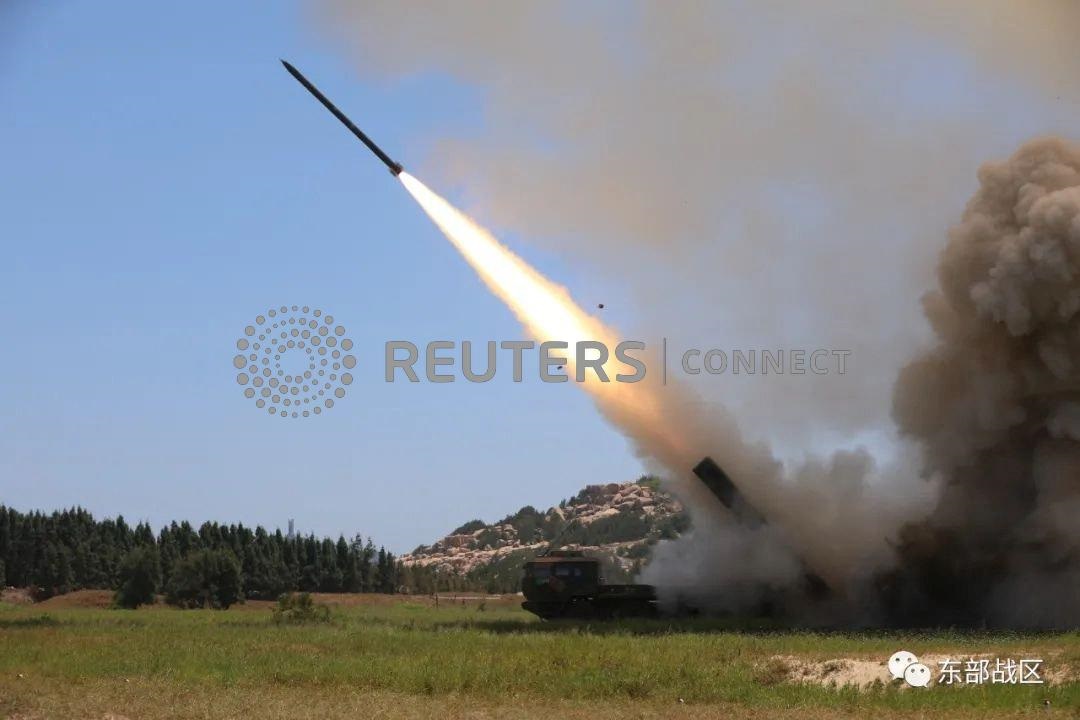 By Yimou Lee and Sarah Wu

TAIPEI (Reuters) – China deployed scores of planes and fired live missiles near Taiwan on Thursday in its biggest drills in the Taiwan Strait, a day after U.S. House of Representatives Speaker Nancy Pelosi made a solidarity trip to the self-ruled island.

China’s military confirmed multiple firings of conventional missiles in waters off Taiwan as part of planned exercises in six zones set to run until noon on Sunday. It activated more than 100 planes, including fighter jets and bombers, and over 10 warships, state broadcaster CCTV said.

Taiwan’s defence ministry said it scrambled jets to warn away 22 Chinese fighter aircraft that crossed the Taiwan Strait median line into its air defence zone, and said troops fired flares late on Thursday to drive away four drones that flew above the area of its Kinmen islands, off the southeastern coast of China.

It said missiles fired by China flew high into the atmosphere and constituted no threat to it, responding to public concern about whether they passed over the main island of Taiwan.

Japan protested that five missiles appeared to land in its economic zone.

“The U.S.-Taiwan collusion and provocation will only push Taiwan towards the abyss of disaster, bringing catastrophe to Taiwan compatriots,” said a Chinese defence ministry spokesperson.

Responding to the Chinese drills, President Tsai Ing-wen said Taiwan would not provoke conflicts but would firmly defend its sovereignty and national security.

“Taiwan will never be knocked down by challenges,” Tsai said in a recorded video message to the people of Taiwan.

“We are calm and not impetuous, we are rational and not provocative, but we will also be firm and not shirk.”

Taiwan said 11 Chinese Dongfeng ballistic missiles had been fired in nearby waters – the first time since 1996.

Taiwan officials said the drills violated United Nations rules, invaded its space and threatened free air and sea navigation. It has been self-ruled since 1949, when Mao Zedong’s communists took power in Beijing after defeating Chiang Kai-shek’s Kuomintang (KMT) nationalists in a civil war, prompting the KMT-led government to retreat to the island.

The military activity followed Pelosi’s unannounced visit of support to Taiwan in defiance of warnings from China.

By midday, warships from both sides remained in close proximity as Taiwan also scrambled jets and deployed missile systems to track Chinese aircraft crossing the line.

“They flew in and then flew out, again and again. They continue to harass us,” the Taiwanese source said.

China, which has long said it reserves the right to take Taiwan by force, says its differences with the island are an internal affair.

In Taiwan, life was largely normal despite worries that Beijing could fire a missile over the main island as North Korea did over Japan’s northern island of Hokkaido in 2017.

“When China says it wants to annex Taiwan by force, they have actually said that for quite a while,” said Chen Ming-cheng, a 38-year-old realtor. “From my personal understanding, they are trying to deflect public anger, the anger of their own people, and turn it onto Taiwan.”

Taiwan said websites of its defence ministry, foreign ministry and the presidential office were attacked by hackers and warned of coming “psychological warfare”.

Wang, speaking at a meeting of Southeast Asian foreign ministers in Cambodia, said China had tried to avert crisis by diplomatic means but would never let its core interests be hurt.

Unusually, the drills in six areas around Taiwan were announced with a locator map circulated by China’s official Xinhua news agency – a factor that for some analysts illustrated playing to both domestic and foreign audiences.

In Beijing, security near the U.S. Embassy was unusually tight though there were no signs of significant protests.

“I think this (Pelosi’s visit) is a good thing,” said a man surnamed Zhao in Beijing. “It gives us an opportunity to surround Taiwan, then to use this opportunity to take Taiwan by force. I think we should thank Comrade Pelosi.”

Pelosi, the highest-level U.S. visitor to Taiwan in 25 years, praised its democracy and pledged American solidarity during her brief stopover. Chinese anger could not stop world leaders from travelling there, she said.

“Our delegation came to Taiwan to make unequivocally clear that we will not abandon Taiwan,” Pelosi told Taiwan’s President Tsai Ing-wen, whom Beijing suspects of pushing for formal independence – a red line for China.

China summoned the U.S. ambassador in Beijing in protest and halted several agricultural imports from Taiwan.

The United States and the foreign ministers of the Group of Seven nations warned China against using Pelosi’s visit as a pretext for military action against Taiwan.

“We’re watching this closely. We continue to urge the Chinese not to overreact here. There’s no reason to react the way that they have or to escalate the tensions,” White House national security spokesperson John Kirby told MSNBC.

The United States has no official diplomatic relations with Taiwan but is bound by U.S. law to provide it with the means to defend itself. Taiwan rejects China’s sovereignty claims, saying only the islanders themselves can decide their future.