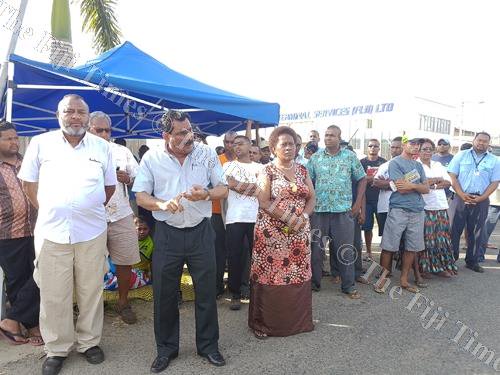 FTUC general secretary Felix Anthony (2nd from left) says they have applied for another permit to march in Suva. Picture: FT FILE

THE Fiji Trades Union Congress has applied for a permit to march through the Capital City next month.

A statement from the union organisation, signed by national secretary Felix Anthony, said the march was to highlight ongoing harassment against workers, unionists and pending campaign issues — matters it says should have been addressed by Government.

The march is planned to take place on August 10 from the Suva Flea Market to Ratu Sukuna Park at 10.30am.

FTUC said the issues to be highlighted included the national minimum wage, the right to strike, labour law reforms, imposition of individual contracts and the Vatukoula strike.

Mr Anthony said the Government had assured the International Labour Organization that trade unions were able to carry out their activities without interference and their rights were enshrined in the Fiji Constitution.

“It is expected to be processed within five days by the FRA and seven days by the police.

“A separate application for venue hire has been made to the Suva City Council.

“We believe that democracy, human rights, including freedom of speech, assembly, peaceful dissent and workers’ rights are being threatened and denied.”

The statement also voiced workers’ demands that these fundamental rights be restored, as these were inherent rights and must not be subject to Government approvals or generosity, FTUC said.

FTUC has also invited people who believe in these rights to participate.

It said Government had nothing to fear if it genuinely believed it was doing the right thing as it proclaimed at international forums.

She said it would go through the normal process before a decision was relayed to FTUC.