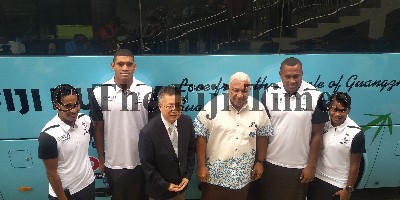 Ambassador for the People’s Republic of China to Fiji Qian Bo and Fiji Rugby Union president and Prime Minister Voreqe Bainimarama flanked by Fiji Airways Fiji and Fijiana 7s players during the handover of the new bus at Albert Park in Suva. Picture: NOA BIUDOLE

In a continued partnership between the two nations, Mr Bainimarama thanked the Chinese government saying the timely aid to the FRU would aid in saving transportation costs.

“The two new buses will lighten costs of $500,000 annually in transporting our Fiji and Fijiana 7s players to and from training,” he said.

Both buses that were manufactured and transported from the Guangdong Province in China had a total cost of around $300,000.