From the Editor-in-chief’s desk: Your September 25 briefing 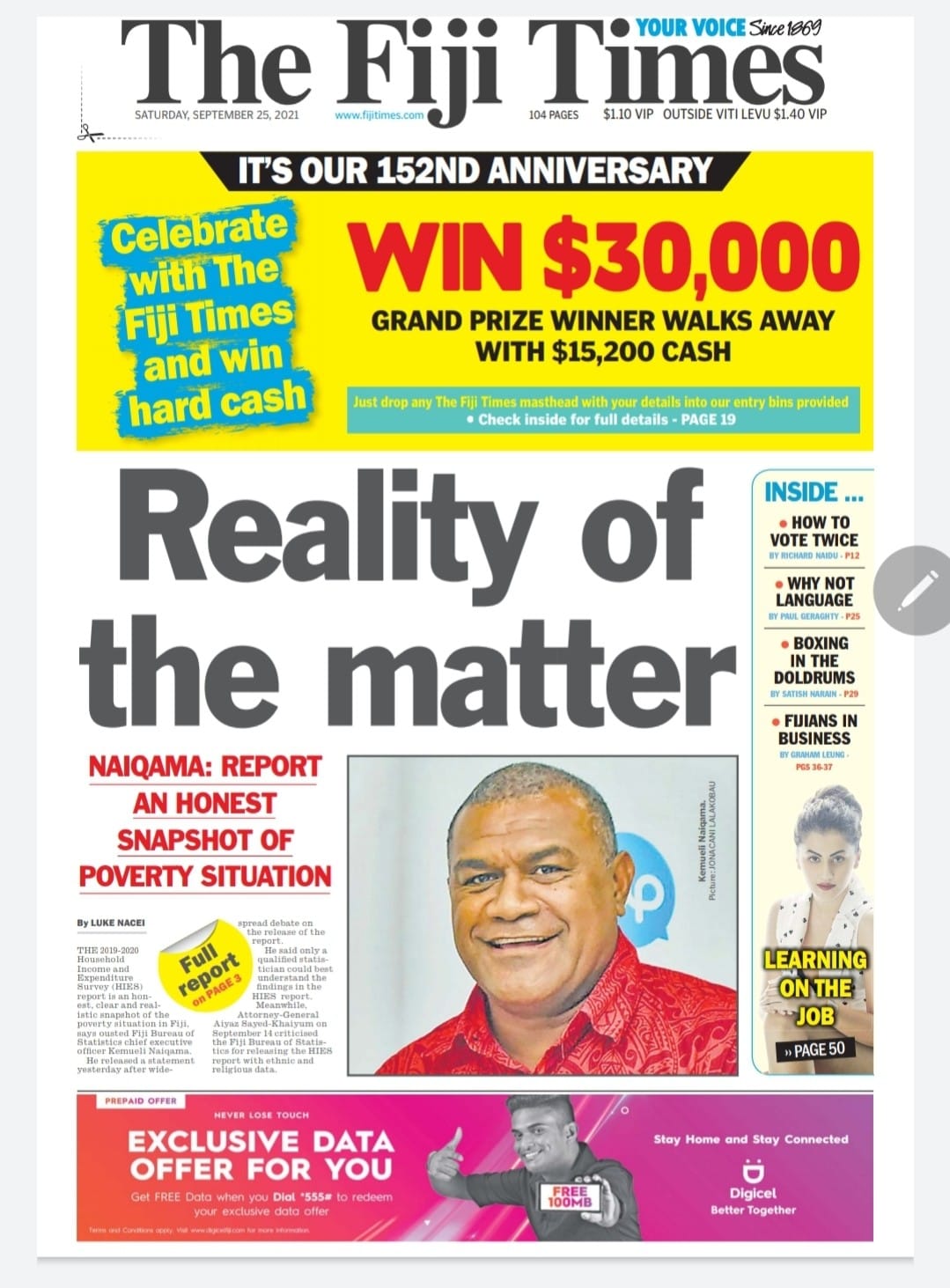 Bula everyone
It’s the last day of another work-week, and as we look ahead to the weekend, we wish you the very best wherever you are. Stay well and stay safe!

CASH PRIZES
Remember we are celebrating our 152nd year anniversary and you can be one of 10 people to win cash prizes this month. All you have to do is cut out the masthead of The Fiji Times and place this in a bin provided at a store selling the newspaper near you. Turn to Page 19 for details. 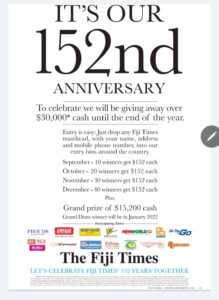 COVID-19
There’s a special supplement on COVID-19 inside… it’s informative and interesting to read.

HEADLINES
Here are some reports that made headlines in The Fiji Times’ edition for Saturday, September 25.

PAGE 2
# A FIJIAN man who migrated overseas and underwent a gender reassignment surgery was denied from having his gender changed on his birth certificate, Attorney-General Aiyaz Sayed-Khaiyum told Parliament today.
# THE Republic of Fiji Military Forces (RFMF) has been contributing troops for peacekeeping duties to five mission fields overseas since 2018.

PICK OF PAGE 3
## THE anti-government motives of The Fiji Times are evident on most of its front pages, claims Assistant Minister for iTaukei Affairs Selai Adimaitoga.
She made the statement in Parliament while delivering an end of week statement on the Media Industry Development Act 2010.
Ms Adimaitoga said The Fiji Times newspaper always published anti-government articles.
“Anyone who speaks against the Government is being published in media like The Fiji Times,” she said.
Ms Adimaitoga said those who spread hate speech were using the media.
Responding to the statement, Attorney-General Aiyaz Sayed-Khaiyum said media organisations should be held responsible for third-party comments on their social media accounts.
He said a ruling by the High Court in Australia had stated that media organisations could no longer say that they were not responsible for third party comments on the social media platforms.
“Those media organisations can no longer hide behind the guise that it’s not their comment. Their webpage or their Facebook page has actually facilitated that and I really hope that the judiciary in Fiji picks up on the development of the laws surrounding social media.”
The Fiji Times editor-in-chief Fred Wesley said the newspaper was used to accusations that it was anti-government.
“Ms Adimaitoga has her reasons for saying what she did. She does not speak for The Fiji Times or its staff. We are not anti-government, nor are we pro-government, and neither she nor anyone should try to put us into one corner or another,” Wesley said.
“The Fiji Times does not exist to create positive headlines for the Government. It exists to publish all views and to ensure there is balanced coverage of the news and balanced political debate.”

LETTERS TO THE EDITOR
It’s the weekend edition and we have seven pages of letters to the editor. Read about what people are saying, find out how they feel about issues, and get a feel of the pulse of the nation. Pages 8,9,20,21,22,23 and 24. 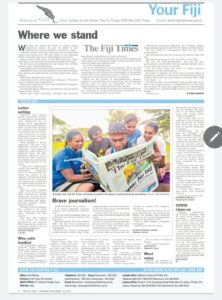 PEOPLE
This section is about people. It’s about their hopes and aspirations. It’s special because people relate to the stories from around the country. It’s emotional and direct! 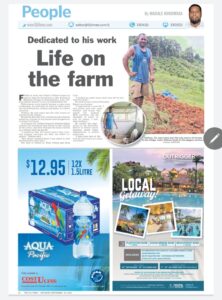 FEATURES/OPINIONS
We have a host of top writers for your weekend reading pleasure. This is a much anticipated section where you find topics ranging from politics, the environment, health to sports and cyber-crime. There’s something for everyone.

# Page 12 – How to vote twice
By RICHARD NAIDU
A FEW columns ago, I commented on how Parliament’s new method of “votes by acclamation” had left my head spinning. As Parliament ended this week my head is no better. Suddenly, on a vote rammed through “by acclamation”, thousands of us now risk of being put through a tiresome and complicated process, just so that we can exercise our democratic right to vote next year.

# Page 25 – Why not language
By PAUL GERAGHTY
SOME of you may have read a tongue-in-cheek letter I wrote to the editor of this newspaper that was published last Saturday (September 18th) with the heading “A modest proposal”. It was, of course, satirical after the manner of my compatriot Jonathan Swift’s synonymous essay of about 300 years ago; but like all satire was intended to raise, among the laughs, some serious thought about the way we do things in Fiji, in particular the way we acknowledge, or fail to acknowledge, the identities of our fellow Fijians.

# Page 28 – Fever is a sign
By Dr JOHN ALFRED
FEVER is a sign that is wrongly interpreted by many individuals. This is something commonly not corrected. Usually temperature checks are routinely done in hospitals or medical centre when we go and see a doctors.

Page 29 – Boxing in the doldrums
By SATISH NARAIN
BOXING’S glory days remind me of a famous line “once were warriors” some of my friends use even today. I still remember my early primary school days when I used to read about Sakaraia Ve, known as Fiji’s golden boy of boxing. Ve was a class act. In those days in the late ’70s and ’80s a boxer could fight up to eight times in a year.

# Page 34 – Epic memories from the ‘Cake Tin’
By RAJNESH LINGAM
THE shift from Wellington to Hamilton has proven to be fantastic in terms of crowd and getting a party atmosphere, but for me the yellow seats at the Cake Tin bring back epic memories of sevens battles in the windy capital of New Zealand.

# Pages 36-37 – Indigenous fijians in business
By GRAHAM LEUNG
GRAHAM Leung looks back at some historical attempts to draw larger numbers of indigenous Fijians in business and commerce. He discusses possible reasons why some businesses fail and also talks to a number of Taukei businessmen and women, tracing their paths to success. HISTORIANS believe that indigenous Fijians (“taukei”) arrived in Fiji more than 3500 years ago. The Dutch explorer Abel Tasman sighted Fiji in 1643, followed by Captain James Cook in 1774. About 100 years later, Ratu Seru Cakobau and other chiefs, ceded Fiji to a reluctant Great Britain.

# Page 38 – Future management of COVID-19
By NILESH LAL
THE Ministry of Health and Medical Services has indicated that it expects COVID-19 to become endemic in Fiji, suggesting that it does not plan to pursue a zero COVID-19 strategy. With the prospects of attaining herd immunity through current generation COVID-19 vaccines now looking bleak, COVID-19 becoming endemic (at least for the medium term) now seems almost an inevitability, however, this will come with a significant human cost.

# Page 40 – The Staggering Costs of Travelling
By AJAY BHAI AMRIT
BULA readers! This week, I thought I would take you with me on my personal overseas travel experience from Suva to Brisbane during the pandemic with some staggering revelations. The trip has come about after I had been strongly advised by doctors to get a sports medical procedure taken care of on my neck where a nerve is being compressed by my spinal chord and reducing the overall movement in my left arm. Travelling for the first time during this COVID-19 pandemic has its challenges and one of those is the escalating cost of travel.

# Page 41 – Divinity in paradise
By RAVNIL NARAYAN
PRASHNEEL Goundar’s Pursuing Divinity in Paradise (2020) is an alluring piece of work, which entails the morals written in simple words from the epics Ramayana and Mahabharata. As the reviewer of his highly compelling piece I strongly feel that this book deserves an enormous commendation as it touches on the core values of Hinduism for the current generation and beyond.

ENTERTAINMENT
# We have pages of entertainment news for you as well. Find out what’s happening in the entertainment industry around the world. 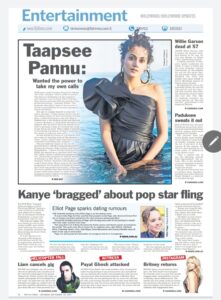 MOTORING
This section is much more than just about vehicles. Check it out. 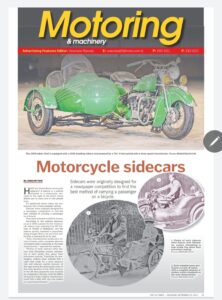 SPORTS
The big one on the back page is about: NEW Fijian Drua coach Mick Byrne wants to showcase the local Fijian rugby flare to the world. In a press conference yesterday Byrne said it would be that brand of exciting rugby that our players and fans love, but with clinical aspects to it in both attack and defence. 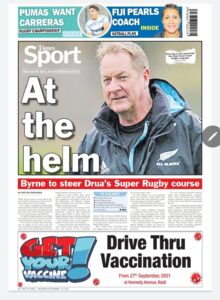 MORE TO READ INSIDE
There’s more to read inside but you’ll have to get a copy to know what we are talking about. Happy reading!