From the Editor-in-Chief’s desk: Your September 22 briefing 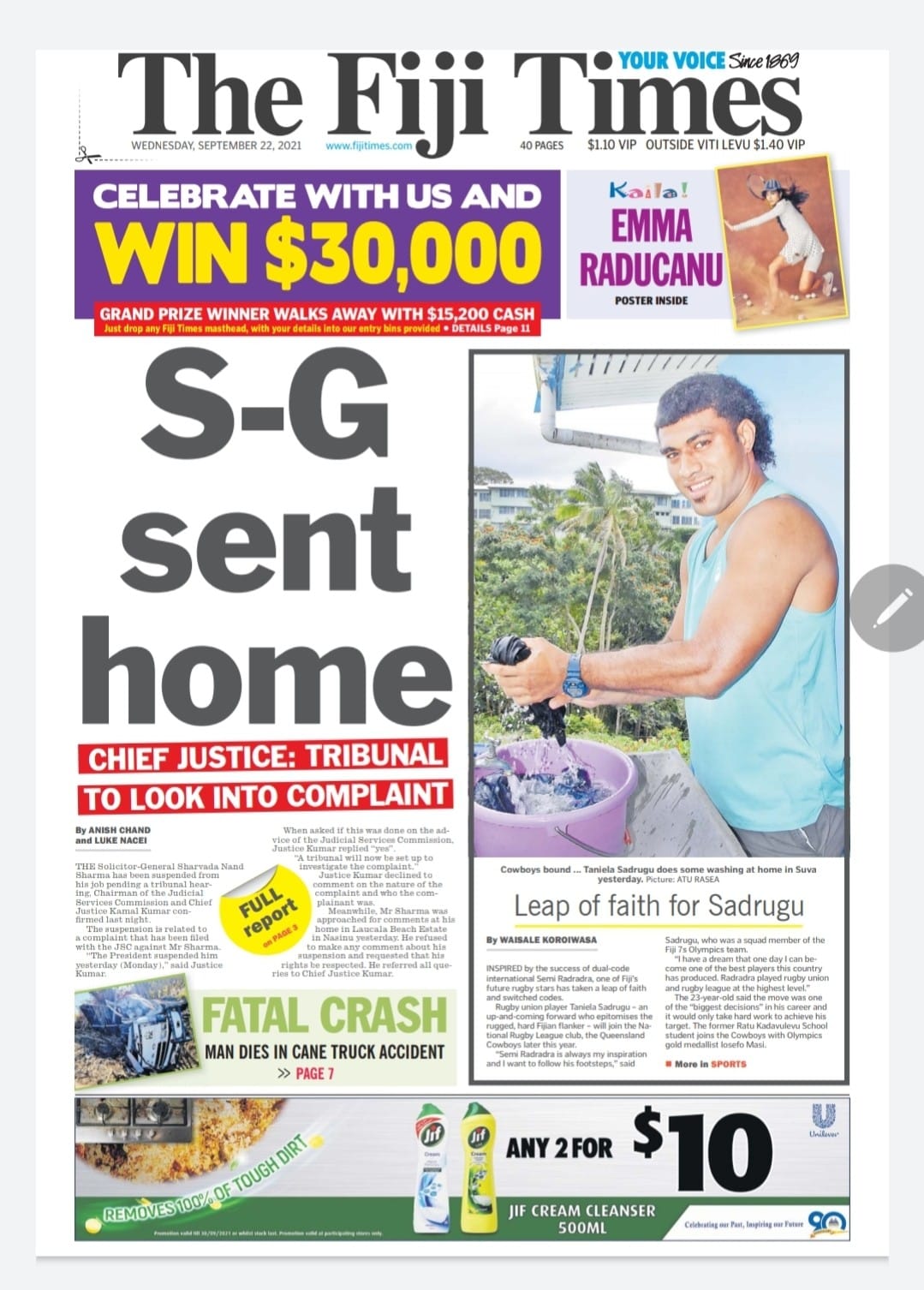 Here are some reports that made headlines in The Fiji Times’ edition for Wednesday, September 22.

But before that, remember we have cash prizes on offer.

Remember you can get into the draw to win cash prizes. All you have to do is cut out the masthead of the Fiji Times, write your name and address, and phone contact, and place this in a bin provided at a store that sells the newspaper near you. 10 winners will get $152 each this month. You’ll have to be in to win though! Check out Page 11 for details.

We also have the Kaila! edition inserted in The Fiji Times newspaper. It’s loaded with fun activities for the young at heart. There are riddles, jokes, lyrics, a poster and stories and pictures to enjoy. It’s colourful and filled to the brim with exciting stuff.

THE Solicitor-General Sharvada Nand Sharma has been suspended from his job pending a tribunal hearing, Chairman of the Judicial Services Commission and Chief Justice Kamal Kumar confirmed last night.

INSPIRED by the success of dual-code international Semi Radradra, one of Fiji’s future rugby stars has taken a leap of faith and switched codes.

GOVERNMENT found it a challenge to distribute the $20 data allocation to Year 13 students because some do not have mobile phones, Attorney-General Aiyaz Sayed-Khaiyum told Parliament today.

THE iTaukei Land Trust Board is processing 96 cane leases that will be issued this year and will also qualify for the Committee of Better Utilisation of Land (CBUL) subsidy, Prime Minister Voreqe Bainimarama told Parliament today.

SEX offenders will be required to report personal information about themselves in the Register of Sex Offenders where they will be monitored by specified agencies in the community. 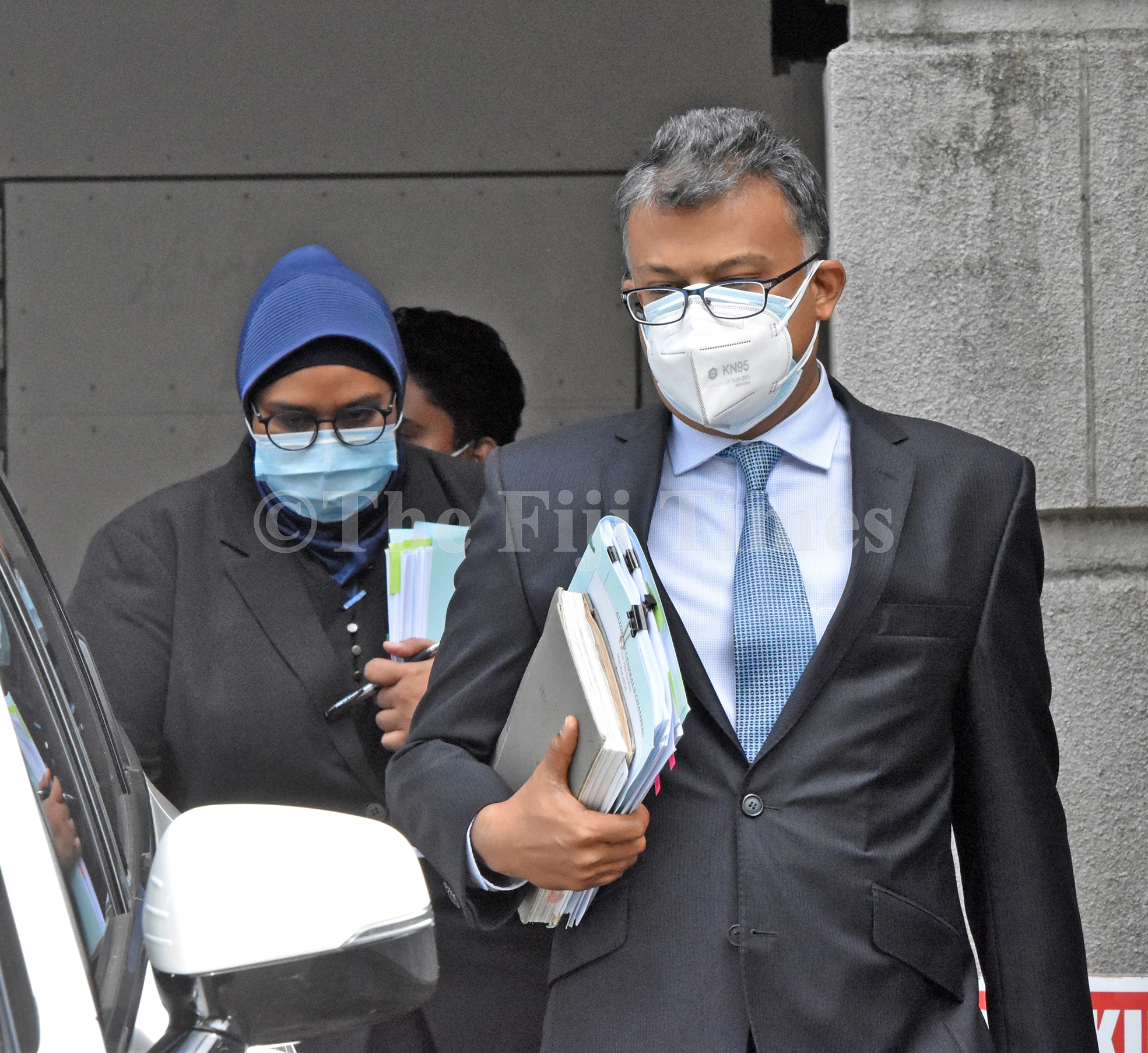 SUSPENDED Solicitor-General Sharvada Sharma should stand his ground against anyone bullying him into resigning.

COMPLAINTS against the Fiji Police Force decreased by 12 per cent in the last quarter of 2020, Minister for Defence Inia Seruiratu told Parliament today.

THE first phase of data collection for the 14 provinces under the cultural mapping programs has been completed, Prime Minister Voreqe Bainimarama told Parliament on Monday. 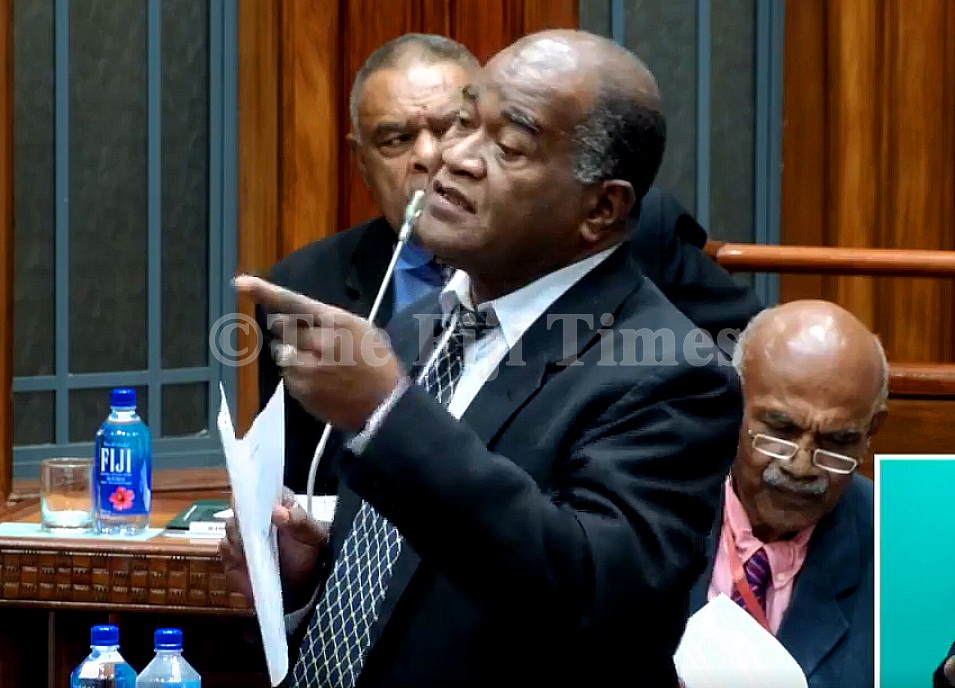 Opposition meber of parliament Niko Nawaikula stresses a point in parliament yesterday. Picture: PARLIAMENT OF THE REPUBLIC OF FIJI

OPPOSITION MP Niko Nawaikula told Parliament that instead of “wasting time” bringing “a trifecta of laws” in relation to voters and elections into the House, Attorney-General Aiyaz Sayed-Khaiyum should sack the Supervisor of Elections.

ATTORNEY-General Aiyaz Sayed-Khaiyum says Government has removed the requirement of getting a deed poll done for married women using their husbands’ names.

THE genesis of the Electoral (Registration of Voters) (Amendment) Bill 2021 “is really to correct the incompetence of certain constitutional office holders” who rushed into getting rid of Opposition MP Niko Nawaikula out of the House. 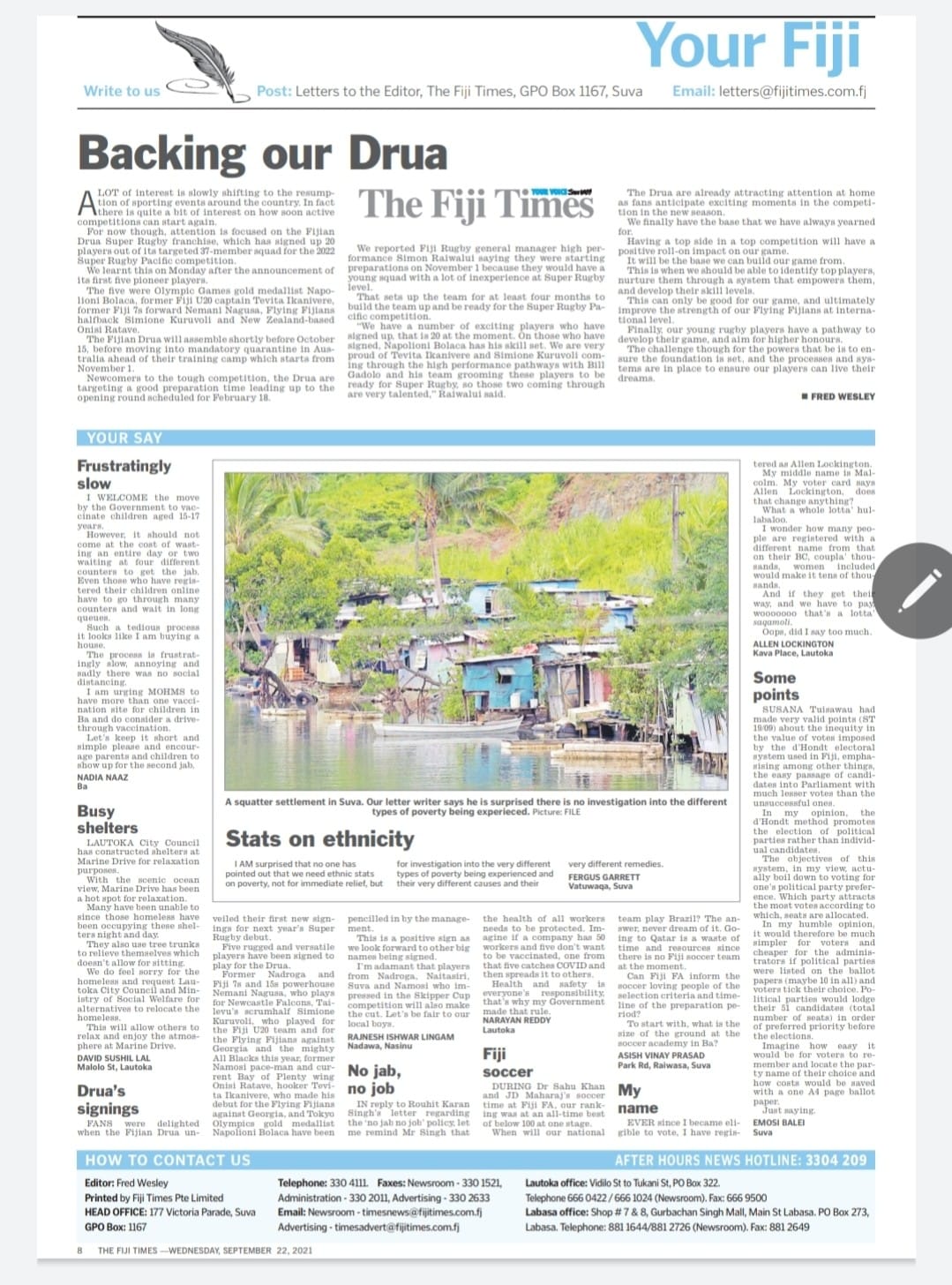 There are interesting letters on Pages 8 and 9. Find out what people are talking about, how they feel about various issues affecting the country, and what they can relate to. 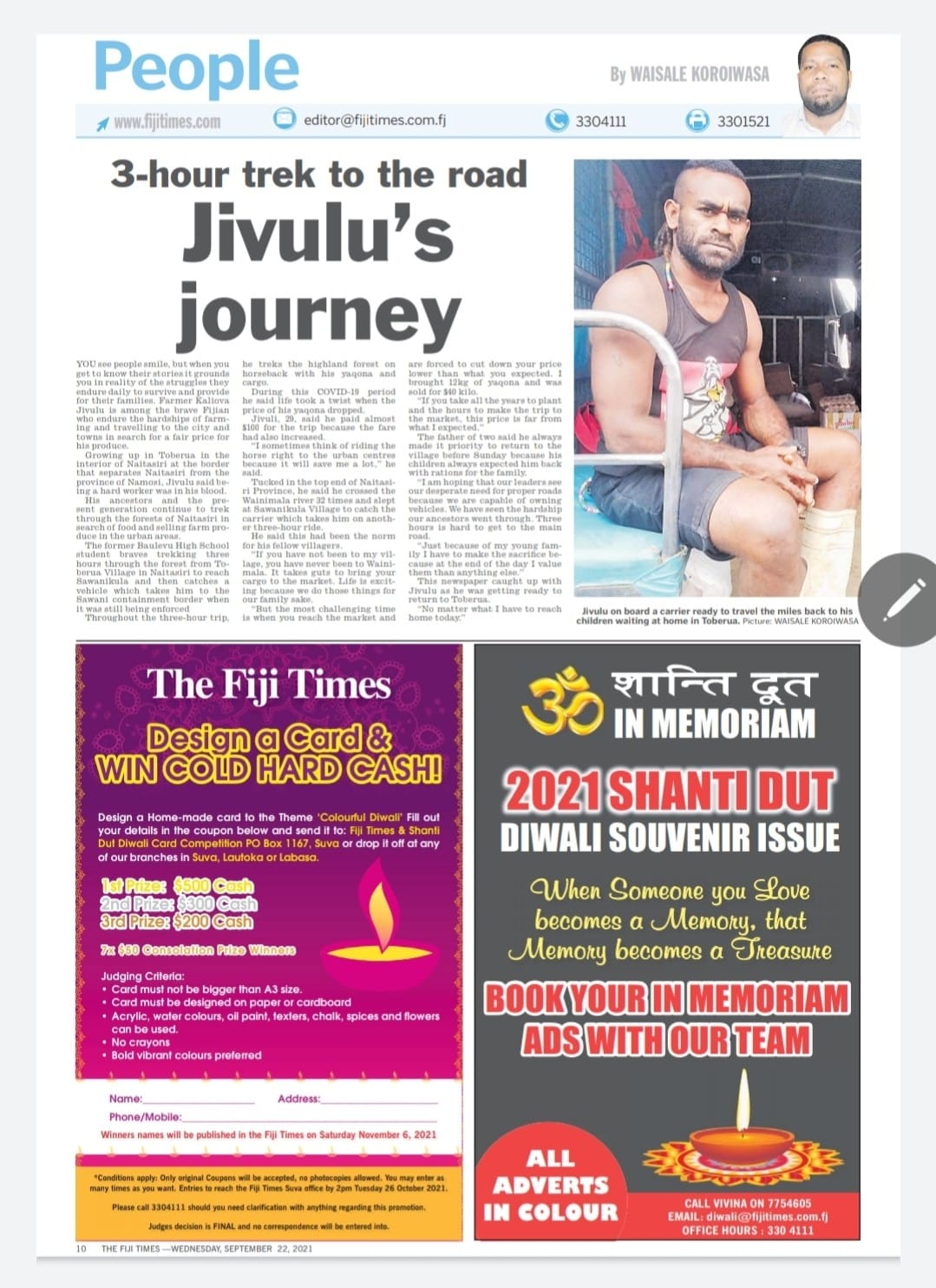 In this ever-popular section, read about: YOU see people smile, but when you get to know their stories it grounds you in reality of the struggles they endure daily to survive and provide for their families.

The big one on the back page is about: Fijian Drua sign up players 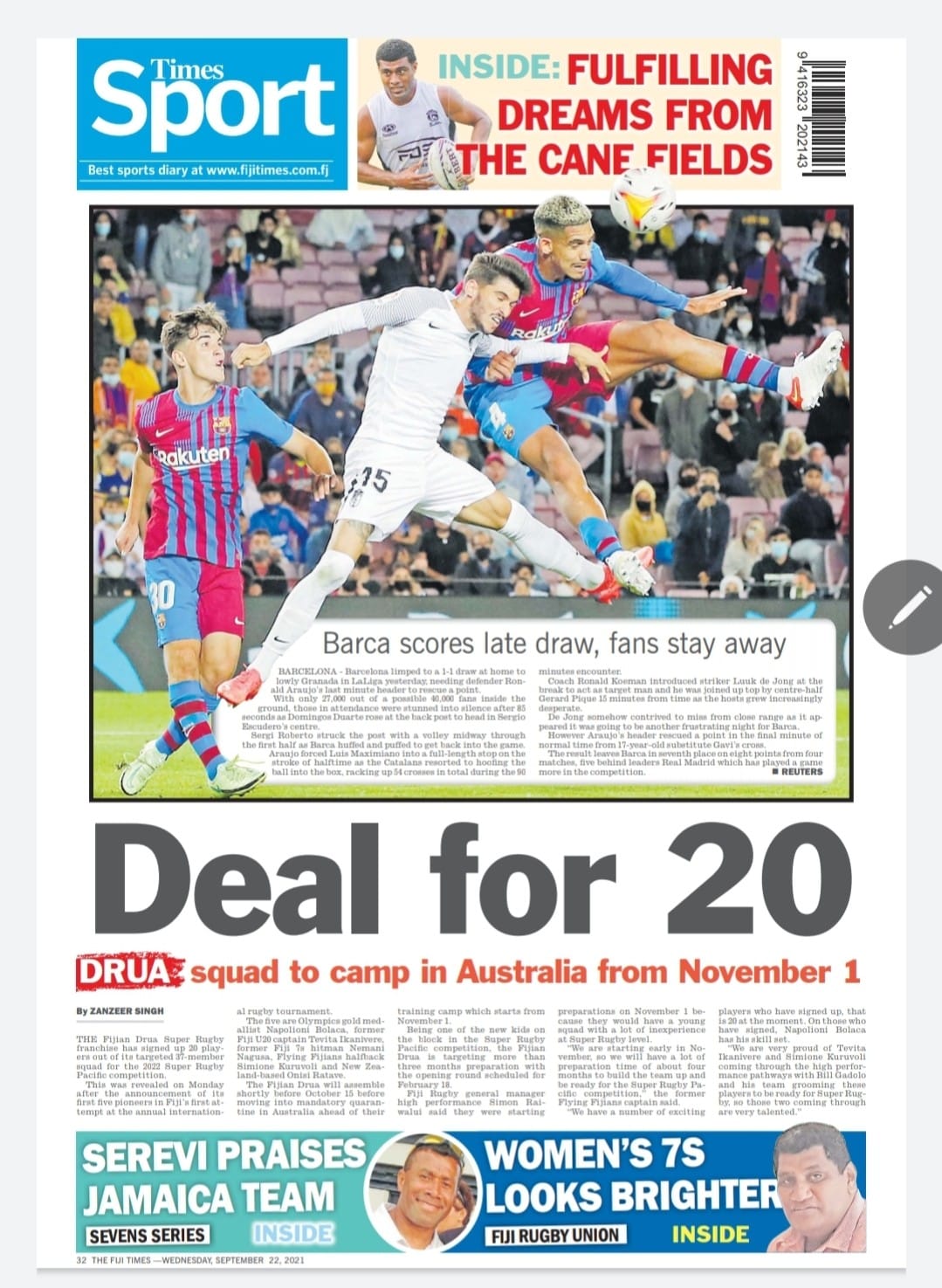 THE Fijian Drua Super Rugby franchise has signed up 20 players out of its targeted 37-member squad for the 2022 Super Rugby Pacific competition.

There’s more to read inside but you’ll have to get a copy to know what we are talking about. Happy reading!