From the Editor-in-Chief’s desk: Your September 16 briefing 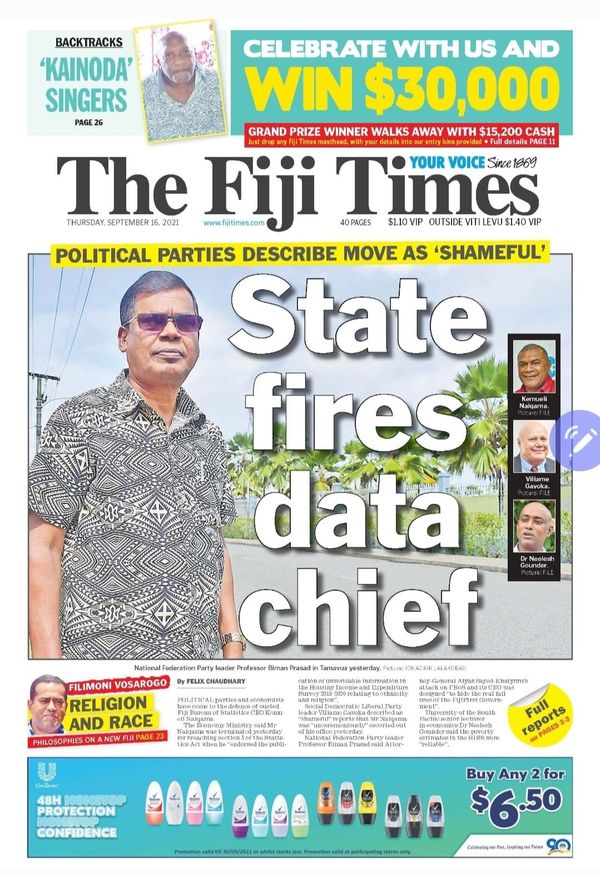 Here’s wishing you well wherever you are. Stay well, stay safe.

Remember you can get into the draw to win cash prizes with The Fiji Times. All you have to do is cut off the masthead of the newspaper, write your name and address and phone contact and drop this into one of the many bins we have at news agencies and outlets that sell The Fiji Times around the country. You’ll have to be in to win though. It’s that easy!

Here are reports that made the headlines in The Fiji Times’ edition for Thursday, September 16.

# POLITICAL parties and economists have come to the defence of ousted Fiji Bureau of Statistics CEO Kemueli Naiqama. The Economy Ministry said he was terminated yesterday for breaching section 5 of the Statistics Act when he “endorsed the publication of unverifiable information in the Housing Income and Expenditure Survey 2019-2020 relating to ethnicity and religion.”

# ATTORNEY General Aiyaz Sayed-Khaiyum’s attack on the Fiji Bureau of Statistics was designed “to hide the real failures of the FijiFirst Government.”

# THE data presented in the 2019-2020 Household Income and Expenditure survey can be used for “meaningful debate about poverty”, dismissed Chief Executive Officer of the Fiji Bureau of Statistics Kemueli Naiqama stated in the report’s preface.

# FIJI Bureau of Statistics CEO Kemueli Naiqama was terminated yesterday, less than 24 hours after Economy Ministry Aiyaz Sayed Khaiyum hinted he would be dealt with for collecting and announcing ethnic and religious data while conducting surveys, which was not in line with Government policy .

# TAKING into account the purpose of 2019 – 2020 Household Income and Expenditure Survey, the poverty estimates produced at all levels were reliable, says University of the South Pacific’s senior lecturer in economics. Dr Nilesh Gounder.

# POVERTY in Fiji is now measured by consumption including the food grown in a family backyard, and not just income, says Attorney General Aiyaz Sayed-Khaiyum.

# POVERTY rates were highest amongst people renting in Government-subsidized housing and almost 50 per cent of those living in poverty, accessed water from a river, creek or a tank.

# MOST of Fiji’s poor are in the age group of 30 years and below, says the Fiji Bureau of Statistics 2019-2020 Household Income and Expenditure Survey.

# FAMILIES with more than seven members in a home were the poorest in Fiji, says the Fiji Bureau of Statistics 2019-2020 Household Income and Expenditure Survey (HIES).

# EVEN though 98 per cent of Fijians have access to safe water, only 38 per cent live in homes where supply never dries out.

# THE 2019-2020 Household Income and Expenditure Survey (HIES) has found that homes with educated Fijians have lower levels of poverty.

# POVERTY rates and food poverty in Fiji is high in homes with older household head, says the 2019-2020 Household Income and Expenditure Survey report. 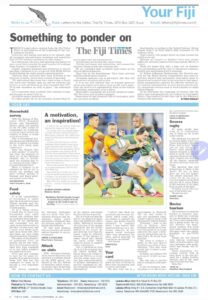 In this popular section, read about: PREM Lata can be described as a woman of great mettle because she has the ability to successfully prioritise and juggle running a home while faithfully meeting her work requirements. She is a great source of inspiration and motivation for the general populace. 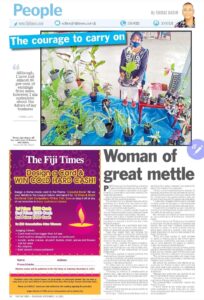 The musical journey continues. Read about: IN the 1960s, life for the people living in Lomainasau Village, Tokatoka, Tailevu was hard. There were no roads linking the interior of the Tebara Delta to Wainibokasi. The only means of transportation was via outboard-engine driven punts. Avenisa Balewai said despite the transport challenges, the people lived “a very happy-go-lucky life.” 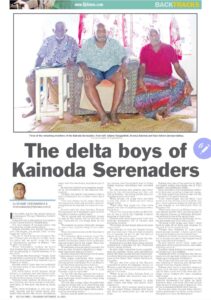 The big one on the back page is about: THE “snail’s pace” response towards mandatory vaccination required across the Fijian rugby fraternity is a cause of concern for the Fiji Rugby Union. The Fiji Times has been told that local stakeholders and players in both the genders had been slow to adhere to instruction for vaccination to return rugby competitions. 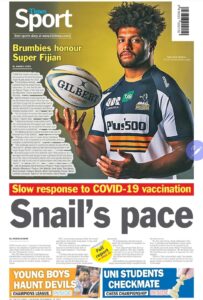 There’s more to read inside but you’ll have to get a copy to know what we are talking about. Happy reading.