From the Editor-in-Chief’s desk: Your October 15 briefing

Remember we are celebrating our 152nd year anniversary and you can get into the draw to win cash prizes. Ten readers won cash prizes in the September draw, and 20 more readers will have a chance to win cash this month of October. All you have to do is cut out the masthead of The Fiji Times newspaper, write your name and address, and a phone contact on it, and place this in a bin provided at a participating store near you. It’s that easy. Turn to Page 13 for details.

Here are some headlines in The Fiji Times’ edition for Friday, October 15.

LETTERS TO THE EDITOR-PAGES 8 AND 9

There are many letters of interest on these pages. Check them out!

This section is about people. It is about the challenges they faced getting to where they are now. Read about: PROFESSIONAL hairdresser Jonetani Mulase is dedicated to perfecting his craft. Commonly known as Joey by his clients and friends, the young hairstylist is a on a journey to establish himself as a hairdresser. “From a very young age I was always interested in styling people’s hair,” he said. “I would style my sister and my mother’s hair every time we would go somewhere and I think that’s when I really developed a love for it.”

Remember we have The Shopper inside The Fiji Times. newspaper… it’s much more than just about supermarket adverts… check out the tips, advice and personal experiences… 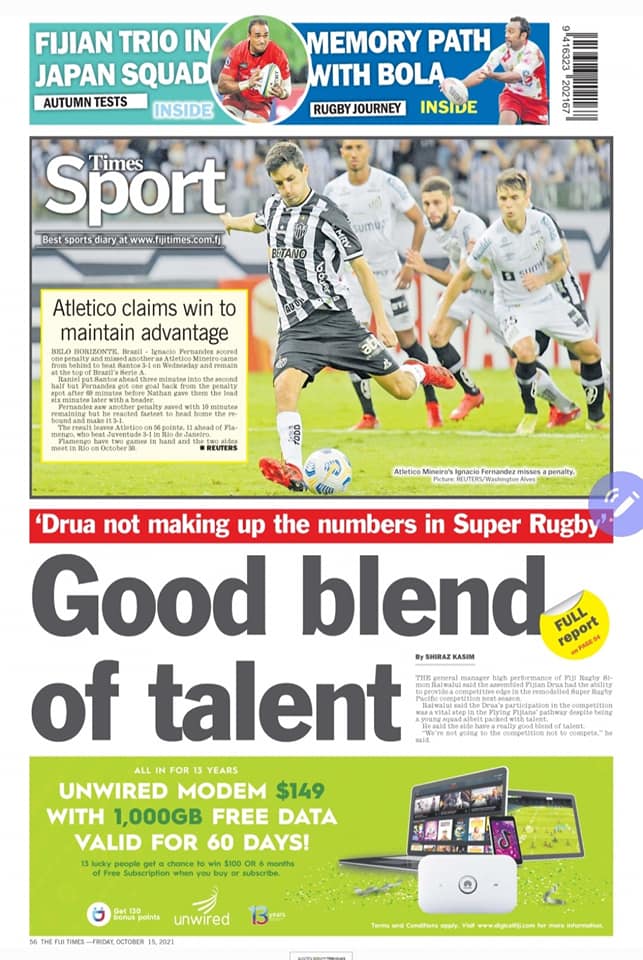 The big one on the back page is about rugby union. Read about the management of the Fijian Drua saying they are not going to just make up the numbers when they compete at the Super Rugby Pacific competition in the new season.