From the Editor-in-Chief’s desk: Your October 14 briefing 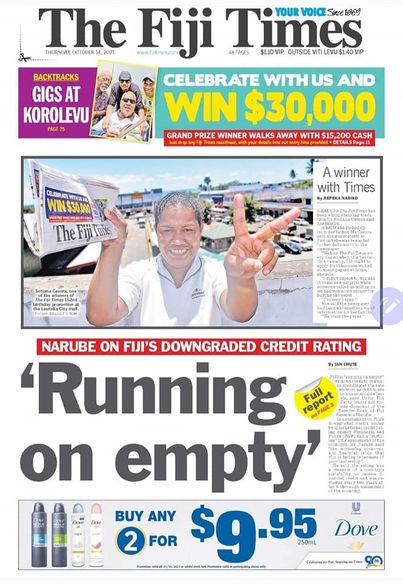 I suppose one of the big ones that will stand out is the announcement that’s focused on our cyclone season. Let’s not forget this as we find ourselves stuck in the face of the COVID-19 pandemic.

We have been warned to expect one to three tropical cyclones from November, 2021 to April, 2022. One of these systems, we have been warned, could be a severe system. This is the warning the Fiji Meteorological Service in its 2021/22 Tropical Cyclone outlook released on Tuesday.

The Western Division, we are told, could face an “elevated risk”.

Remember we are celebrating our 152nd year anniversary and you can be in the draw to win cash prizes. Ten lucky readers won cash prizes last month, and 20 more readers have an opportunity to win cash this month. 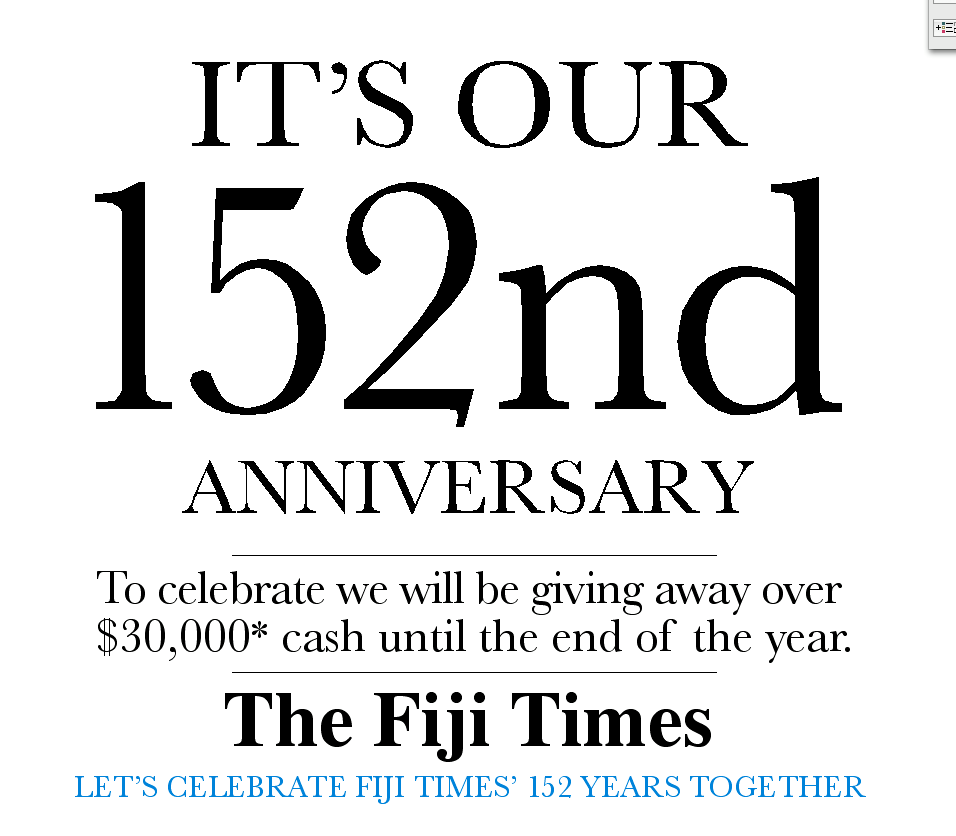 You can get into the draw by simply cutting out the masthead of The Fiji Times newspaper, write your name, address and phone contact on this and place it in a bin at a participating store near you. It’s that easy! Turn to Page 11 for details!

Here are some headlines in the Fiji Times’ edition for Thursday, October 14.

FIJI is “running on empty” without room to continue spending at the rate we were as debt soars to unsustainable levels, says Unity Fiji Party leader and former Governor of the Reserve Bank of Fiji Savenaca Narube. In a statement on Fiji’s downgraded credit rating by international credit rating agency Standards and Poor’s (S&P) and a “scathing” IMF assessment of the economy, Mr Narube said “the worsening economic and financial crisis that Fiji is facing is because of poor leadership”.

A TOTAL of 344 teachers will be terminated because of the Government’s ‘no jab, no job’ policy. This, according to Education Minister Premila Kumar. “Unfortunately, 130 teachers were terminated under no jab, no job policy, 64 teachers will be given their termination letter this week as they have confirmed in writing that they will not get vaccinated,” she said. “Another 150 teachers have requested time to get an exemption certificate from the Ministry of Health and Medical Services.”

THE fight against the deadly COVID-19 virus will take a little while longer, says Prime Minister Voreqe Bainimarama. While speaking to frontline workers in Nadi on Tuesday, he explained why Fiji’s fight against the global pandemic was far from over. “This fight is going to go on for a little while longer. We all understand that,” he said. “We need to bring the death number down by the vaccination.”

LETTERS TO THE EDITOR – PAGES 8 AND 9 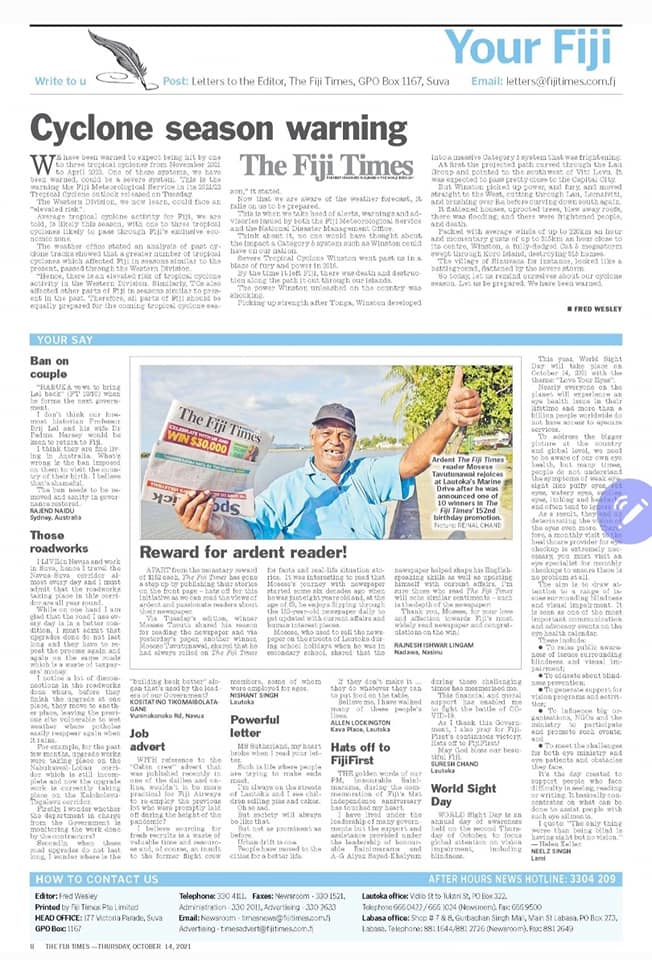 Check out interesting letters on these pages. Feel the emotions, get a taste of what’s trending in the public domain and find out what interests readers. Feel the pulse of the nation.

This section is about people. It is about their challenges, their hopes and aspirations. Read about: Serupepeli Ramataka 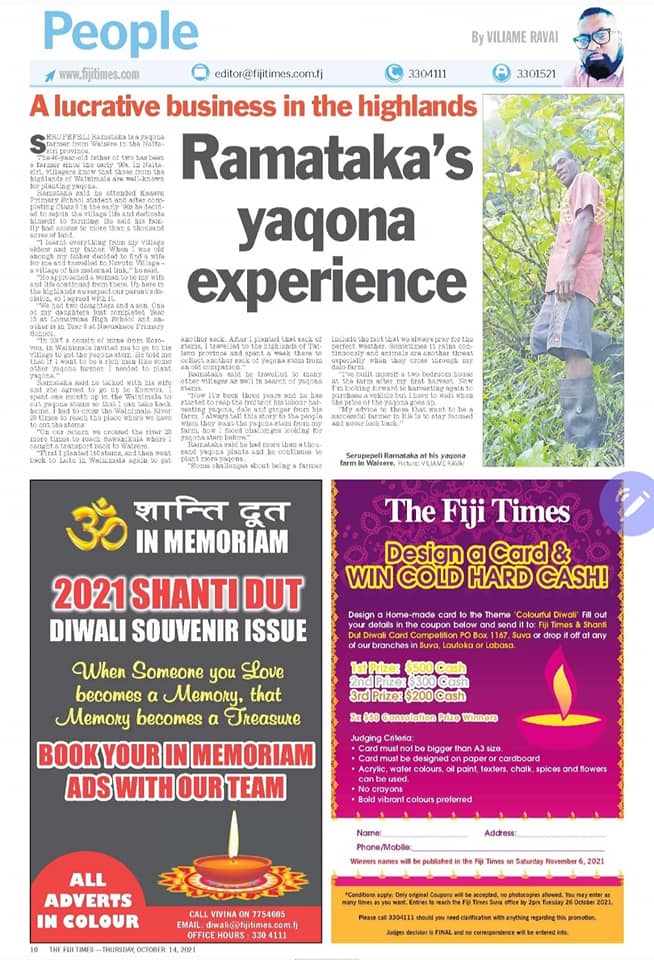 SERUPEPELI Ramataka is a yaqona farmer from Waisere in the Naitasiri province. The 46-year-old father of two has been a farmer since the early ’90s. In Naitasiri, villagers know that those from the highlands of Wainimala are well-known for planting yaqona. Ramataka said he attended Kasavu Primary School student and after completing Class 8 in the early ’90s he decided to rejoin the village life and dedicate himself to farming. 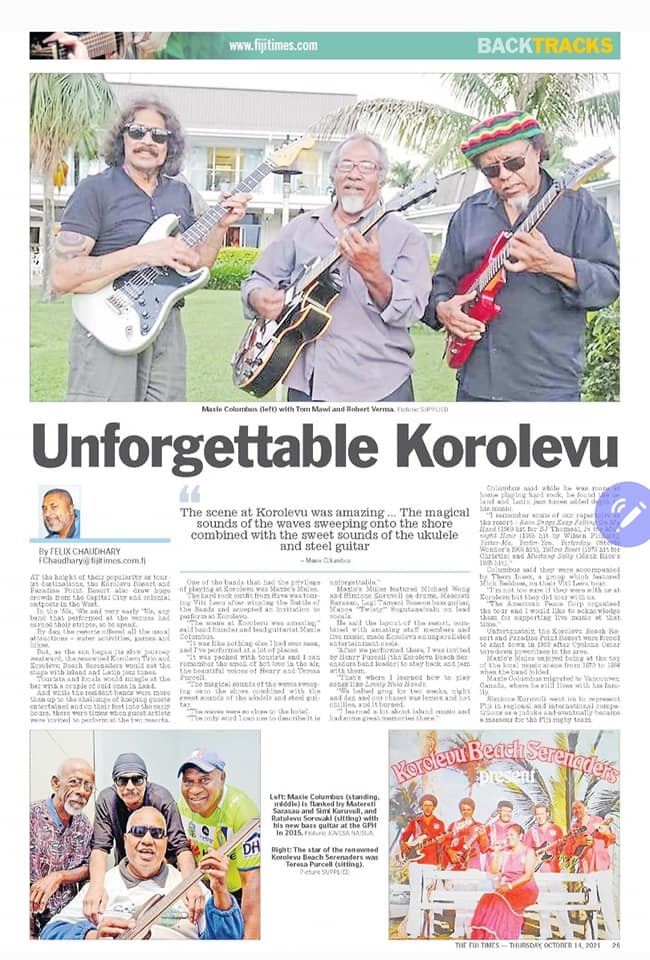 AT the height of their popularity as tourist destinations, the Korolevu Resort and Paradise Point Resort also drew huge crowds from the Capital City and colonial outposts in the West. In the ’50s, ’60s and very early ’70s, any band that performed at the venues had earned their stripes, so to speak. By day, the resorts offered all the usual attractions – water activities, games and hikes. But, as the sun began its slow journey westward, the renowned Korolevu Trio and Korolevu Beach Serenaders would set the stage with island and Latin jazz tunes. Tourists and locals would mingle at the bar with a couple of cold ones in hand.

The big one on the back page is about: Dubai 7s 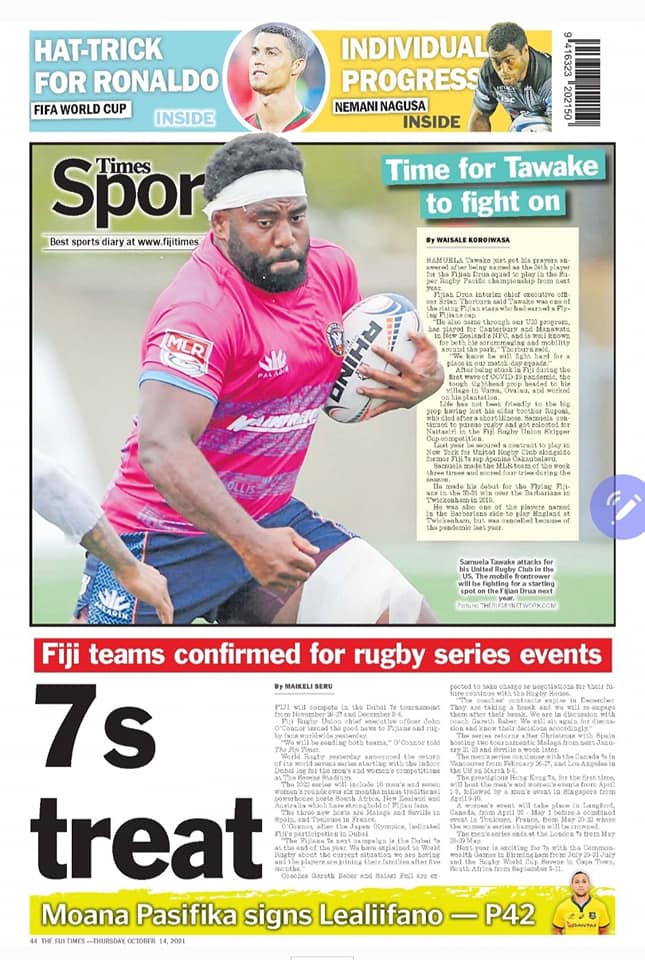 FIJI will compete in the Dubai 7s tournament from November 26-27 and December 3-4. Fiji Rugby Union chief executive officer John O’Connor issued the good news to Fijians and rugby fans worldwide yesterday. “We will be sending both teams,” O’Connor told The Fiji Times. World Rugby yesterday announced the return of its world sevens series starting with the indoor Dubai leg for the men’s and women’s competitions at The Sevens Stadium. The 2022 series will include 10 men’s and seven women’s rounds over six months minus traditional powerhouse hosts South Africa, New Zealand and Australia which have stronghold of Fijian fans.

You’ll have to get a copy to find out what we are talking about! There’s certainly more to read inside!