From the Editor-in-Chief’s desk: Your July 30 briefing 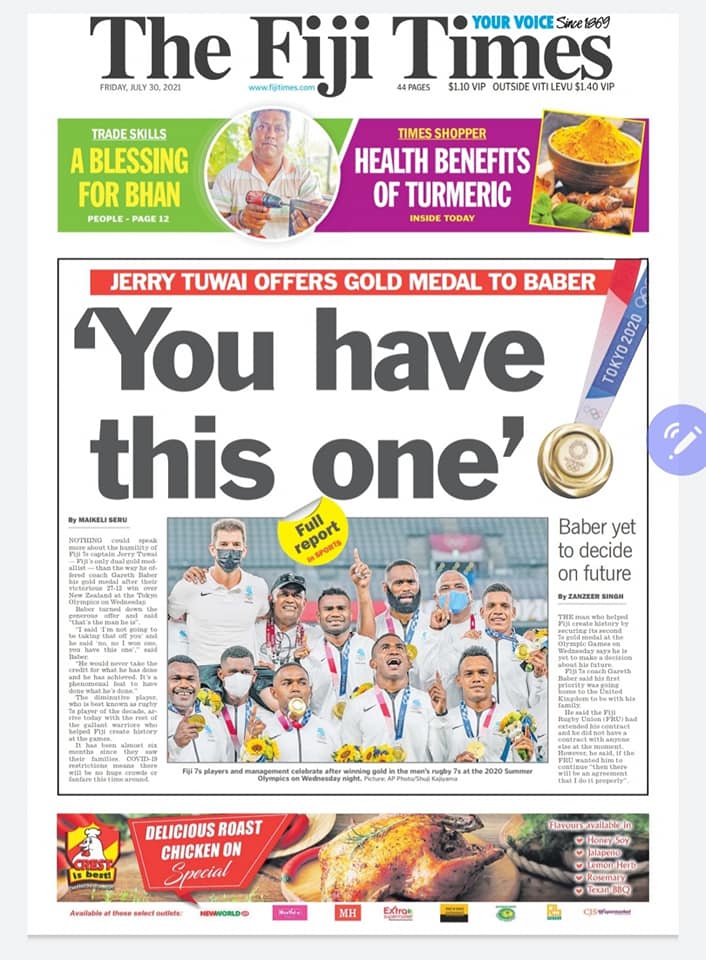 It’s difficult to shrug aside the victory at the Olympic Games in Tokyo, Japan.

As successful national coach Gareth Baber contemplates his future on his way to Europe, we are left to savour a great victory at the pinnacle of world sporting events.

The Los Angeles Times reported that while in another sign of the reshaped TV landscape, ratings for NBC’s telecasts of the 2020 Olympic Games in Tokyo were down significantly from 2016, however, the event is still among the most-watched TV programming of the year.

It reported the 2021 figures include the average number of people watching on streaming platforms, which hit a record on Monday, for an Olympics, with 746,000 viewers.

The numbers are, however, still significant for us as a small nation.

It gives us a feel of the number of eye-balls focused on our team and that great gold medal win.

Without a doubt, this is marketing we can never shrug aside.

It places emphasis on the achievement of our national 7s team, and raises that victory to the highest pedestal.

Today you could feel a sense of joy and appreciation around the country.

Long stressed out by the rising number of COVID-19 cases, today was like a jolt of happiness. There was a sense of purpose. People were happy.

This is why we continue to say that 7s rugby is like glue that binds us all together.

It is like a bridge that unites people irrespective of ethnicity, gender, age and religion. It cuts right through every imaginary demarcation line, and unites a nation.

The abbreviated version of the sport is like a platform that draws attention, motivates and inspires Fijians.

Times are very different now with the pandemic around. However, there can be no doubts about how appreciative Fijians are.

We may be a little dot on the world map, but we sure are Olympic Games champions. We are the best in the business! What a final. What a show! What a feeling!

The permanent secretary for Health and Medical Services Dr James Fong announced 1301 new cases of COVID-19 for the 24 hour period that ended at 8am today. He said 293 cases are from the Western Division and 1008 cases are from the Central Division.

Meanwhile, here are some headlines in The Fiji Times’ edition for Friday, July 30.

THE man who helped Fiji create history by securing its second 7s gold medal at the Olympic Games on Wednesday says he is yet to make a decision about his future. Fiji 7s coach Gareth Baber said his first priority was going home to the United Kingdom to be with his family.

NOTHING could speak more about the humility of Fiji 7s captain Jerry Tuwai — Fiji’s only dual gold medallist — than the way he offered coach Gareth Baber his gold medal after their victorious 27-12 win over New Zealand at the Tokyo Olympics on Wednesday. Baber turned down the generous offer and said “that’s the man he is”.

PRIME Minister Voreqe Bainimarama says a panel is being established to interview candidates who applied for positions under the Constitutional Offices Commission. He made the comment during the Parliamentary Committee of Supply this week.

No capacity to afford risk pay

ATTORNEY-GENERAL Aiyaz Sayed-Khaiyum says Government does not have the capacity to give frontliners risk pay for the work they are doing. He made the comment in response to a motion by National Federation Party MP Lenora Qereqeretabua to increase personal emoluments for frontline workers in Parliament yesterday.

ATTORNEY-GENERAL Aiyaz Saiyed-Khaiyum says Fiji will suffer a GDP loss of $350 million if it undertakes a 14-day lockdown. He was responding to Social Democratic Liberal Party (SODELPA) leader Viliame Gavoka’s question in Parliament yesterday about the cost of lockdown.

A 43-YEAR-OLD man was taken into police custody on Wednesday night on suspicion of committing a malicious act. Fiji Police Force acting Commissioner Rusiate Tudravu confirmed officers from the Criminal Investigations Department (CID) conducted a search at the home of Ranjit Raju at Laucala Beach Estate before taking him into custody at the Totogo Police Station. “He was being questioned in relation to allegations of a fake account that he is linked to being used to create public anxiety,” he said. 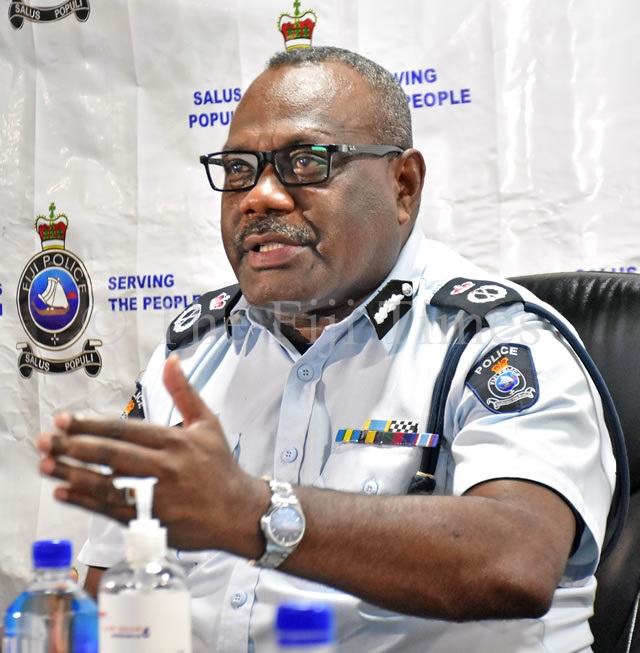 ACTING Police Commissioner Rusiate Tudravu has assured the business community on Taveuni that their concerns over police services would be looked into.

LION One Metals Ltd has announced the discovery of high-grade gold at its Tuvatu gold mines in Nadi. The company stated the gold deposits were found from ongoing deep step-out drilling. 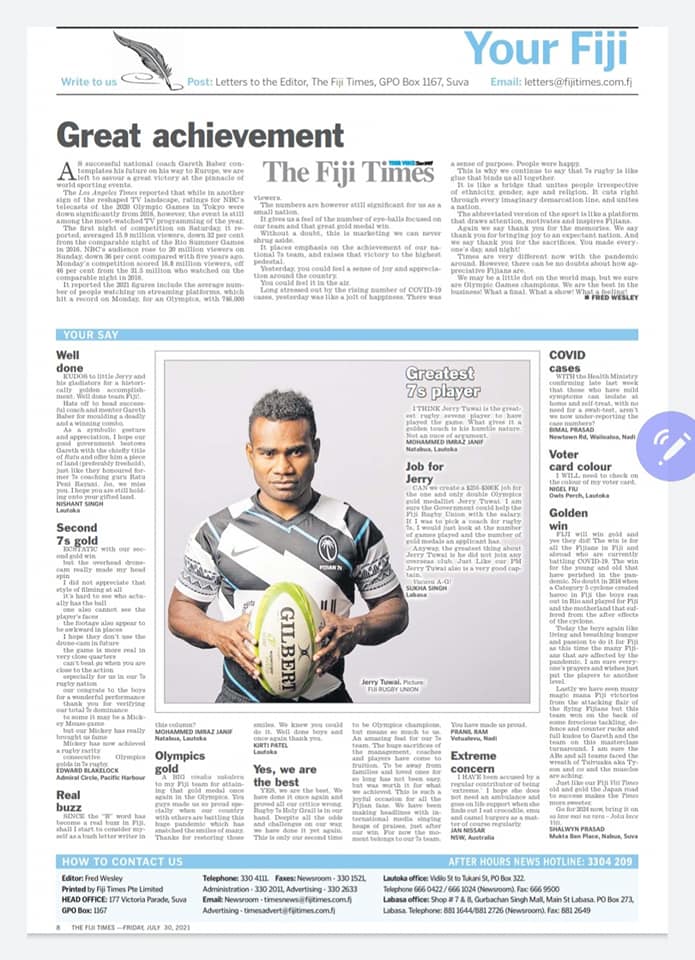 There are interesting letters to the editor on Pages 8 and 9. Check out what people are saying about our historic victory in Tokyo, Japan.

In this ever-popular section of the newspaper, read about: Sushil Bhan

AFTER his elder brother passed away, Sushil Bhan had no choice but to take over the business he had started to sustain his family. The Nadera resident studied automotive engineering at the Rishikul Vocational Centre but gave up his garage dream to take over the aluminum joinery works that his brother left behind in 2006. 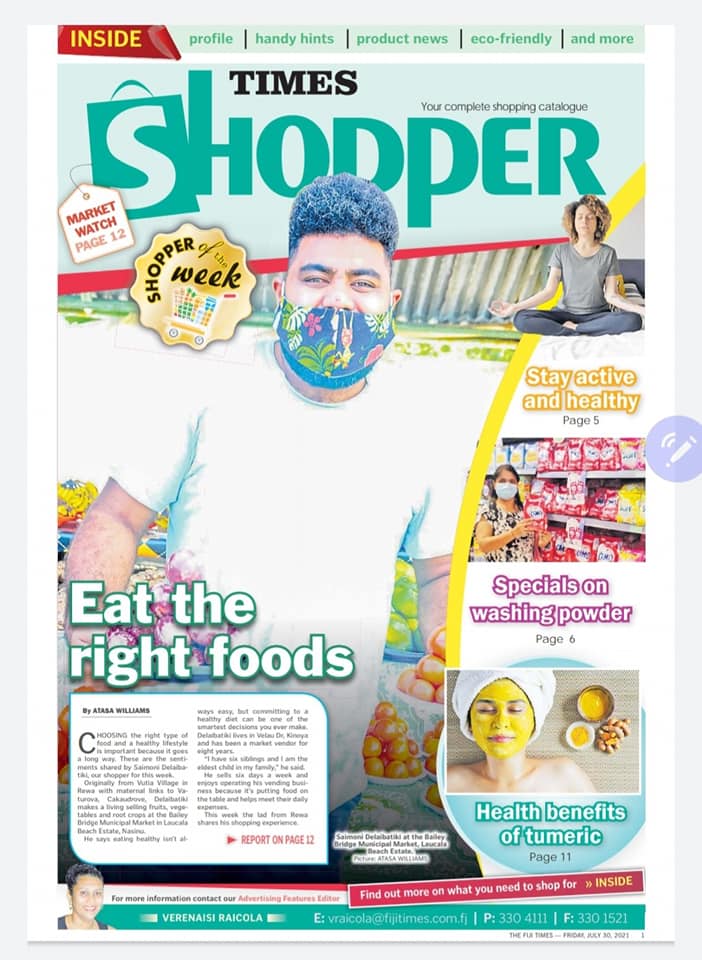 This section of the newspaper is much more than just about shopping. There are great ideas and tips for you.

The big one on the back page is from the Olympic Games in Tokyo, Japan. 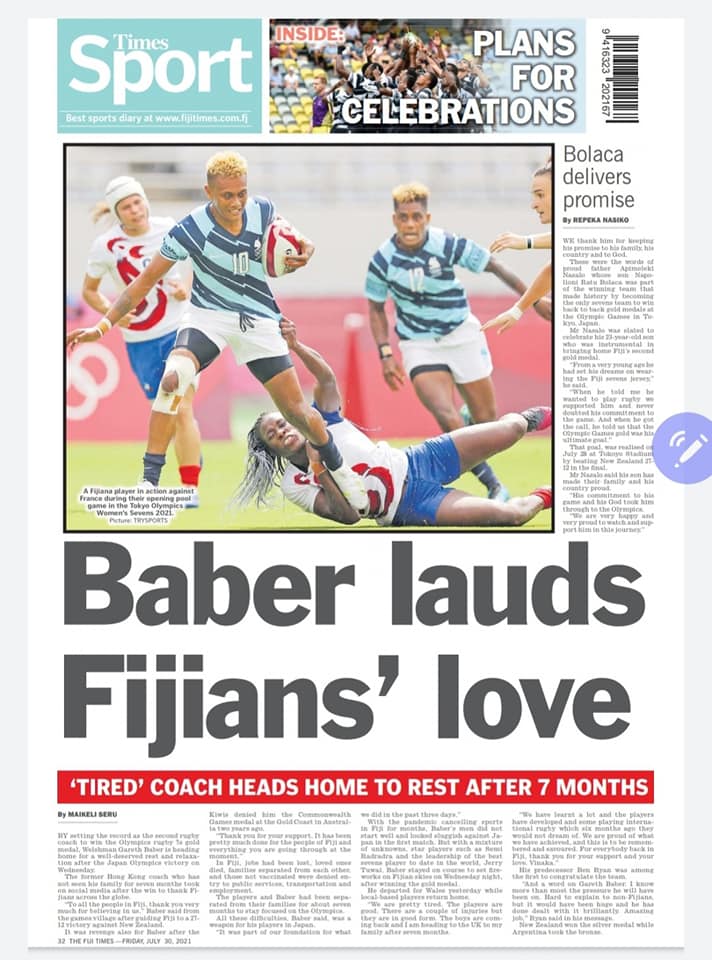 There’s a lot more to read inside. but you’ll have to get a copy to know what we are talking about. Happy reading!