From the Editor-in-Chief’s desk: Your January 7 briefing 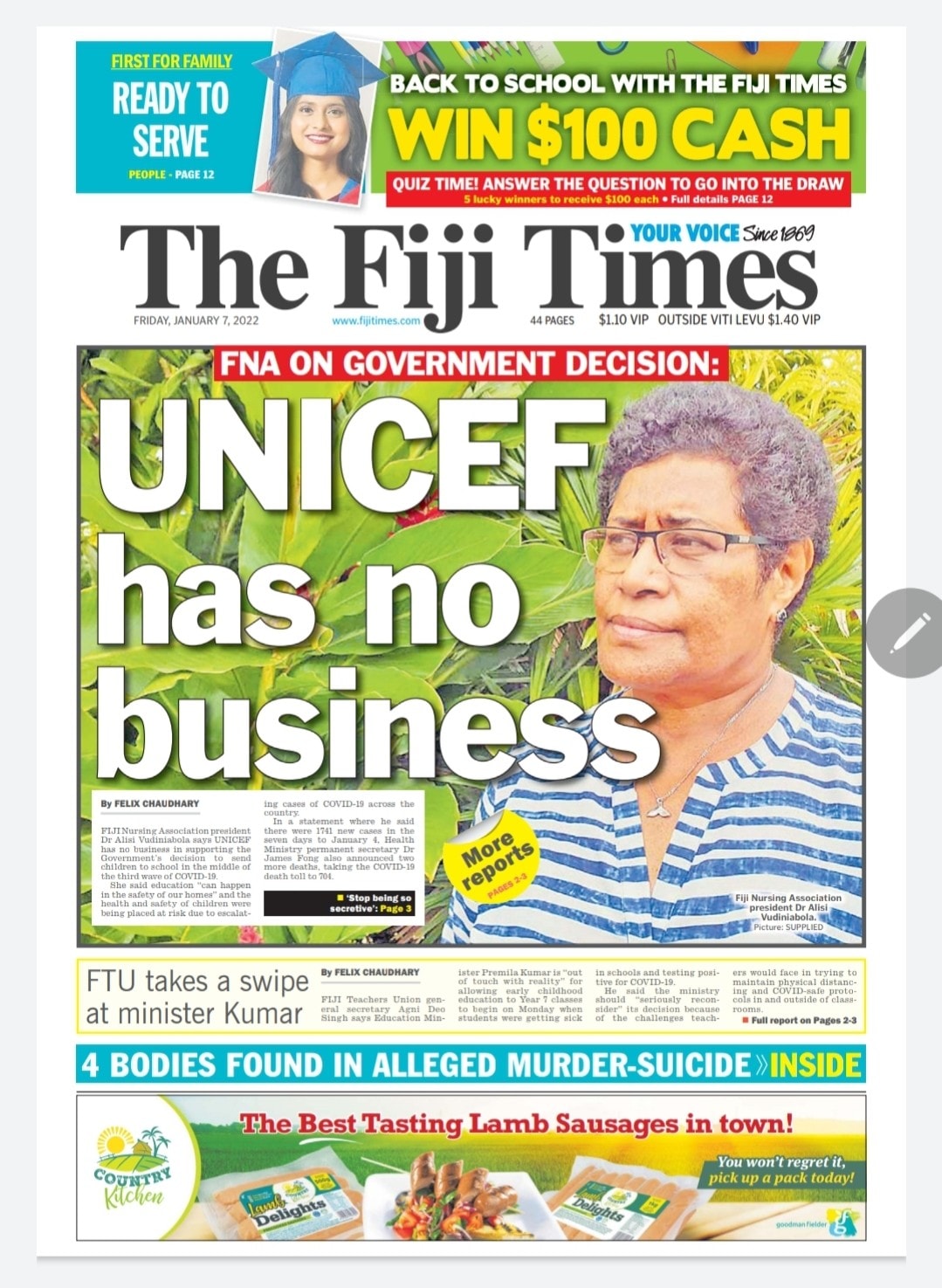 Here are some headlines that made The Fiji Times’ edition for Friday, January 7.

FIJI Nursing Association president Dr Alisi Vudiniabola says UNICEF has no business in supporting Government’s decision to send children to school in the middle of the third wave of COVID-19.

Minister ‘out of touch’

FIJI Teachers Union general secretary Agni Deo Singh says Education Minister Premila Kumar is “out of touch with reality” for allowing early childhood education to Year Seven classes to begin on Monday when students were getting sick in schools and testing positive for COVID-19.

HEALTH Ministry permanent secretary Dr James Fong says he will be announcing more stringent measures relating to masking and social gatherings this week in the wake of escalating cases of COVID-19 across the country.

STOP being so secretive and stop downplaying the number of people infected by COVID-19 because we are talking about people’s lives.

‘UNICEF has no business’

THE Fiji Teachers Union claims students at several schools who fell sick and were rushed to hospital had tested positive for COVID-19.

A BA man is asking questions of the Health Ministry after his brother’s body was mistakenly released to a family from Navua at the Suva morgue.

THE Fiji Teachers Union has suggested classes be broken up into two groups when primary school students return to school next week. 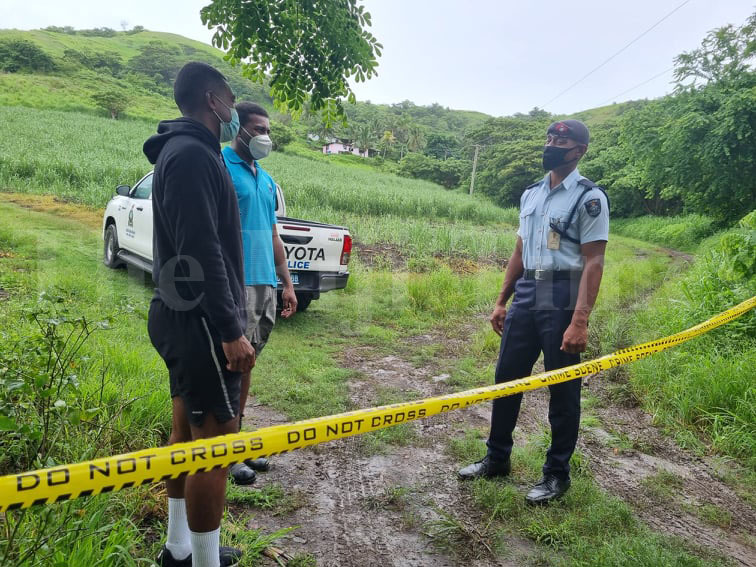 The white house on the top is the scene of the alleged multiple murder in Volivoli . Picture: ANISH CHAND

FOUR people died in a family murder-suicide in Volivoli, Rakiraki in the early hours of Thursday.

RAKIRAKI lawyer Josaia Niudamu has revealed that alleged triple murderer David Narayan was his client, and he was representing him in a case of alleged rape and sexual assault.

A GROUP of parents expressed concerns this week about the Education Ministry’s decision to reopen schools for all classes.

PARENTS in Labasa are pleading with the Ministry of Education to organise separate school buses for their children. 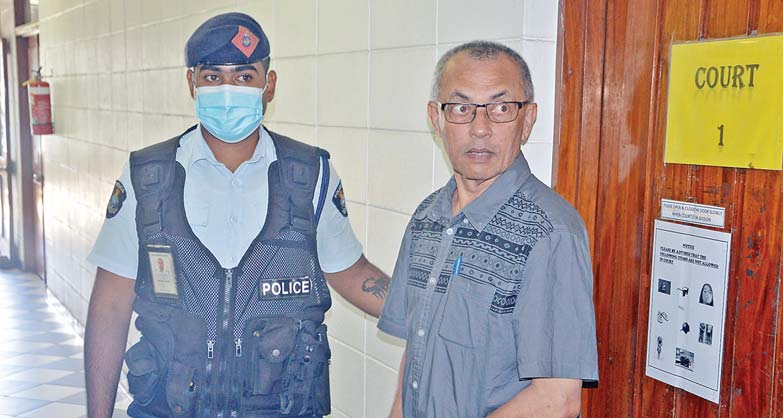 MOHAMMED Raheesh Isoof tried to act like a saviour to the deceased family of five whose bodies were found in the Nausori highlands in 2019.

FORMER Solicitor General (S-G) Sharvada Sharma’s application for Judicial Review, against the President of Fiji and the Judicial Services Commission, was called in the Suva High Court.

TOURISM industry worker Kuini Votiva could not stop her tears as she described the struggles she faced when she was laid off from work because of COVID-19.

POOJA Devi Nair said while many Fijians had the resources to celebrate the Christmas and new year’s festive season, her primary concern was ensuring her five children had food to eat.

FOR Krishnil Kumar and his family of five, the festive season was spent worrying about how they would survive on a very meagre income. 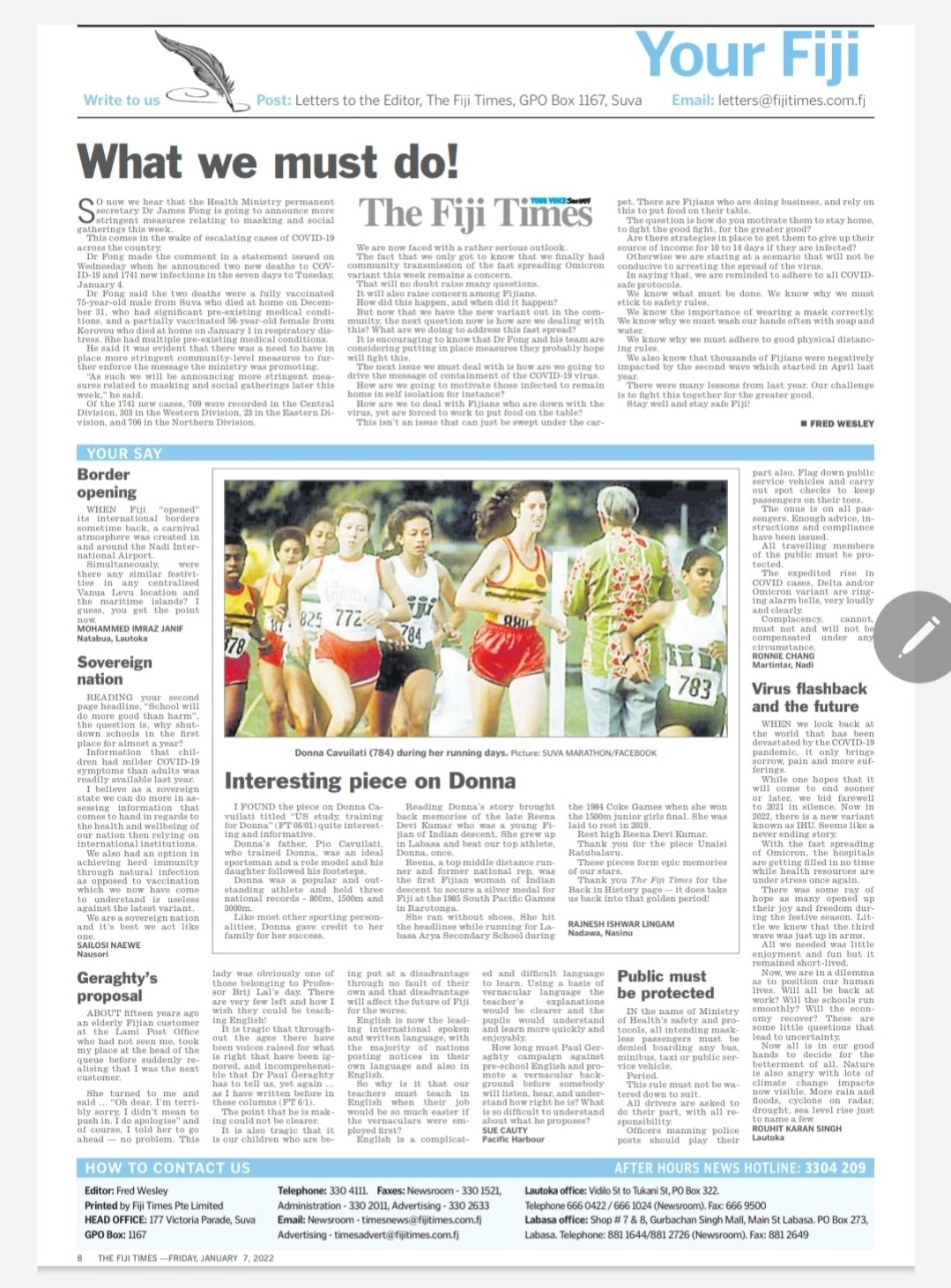 This section is all about people … people of all different walks of life. Today, we read about: Dr Sharon Chandra 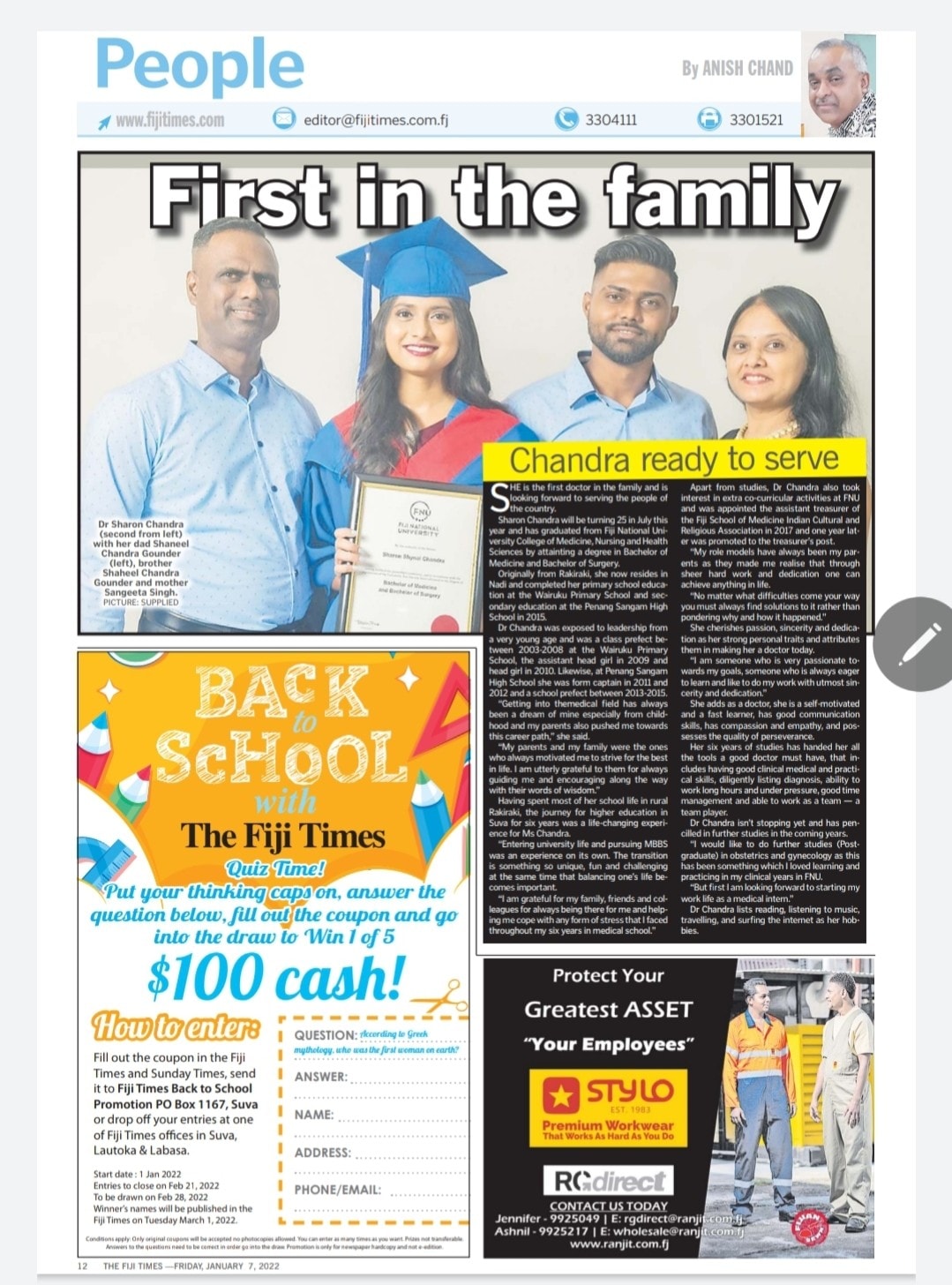 This section has become a favourite pretty quick, with many useful shopping and household information, tips and hacks. 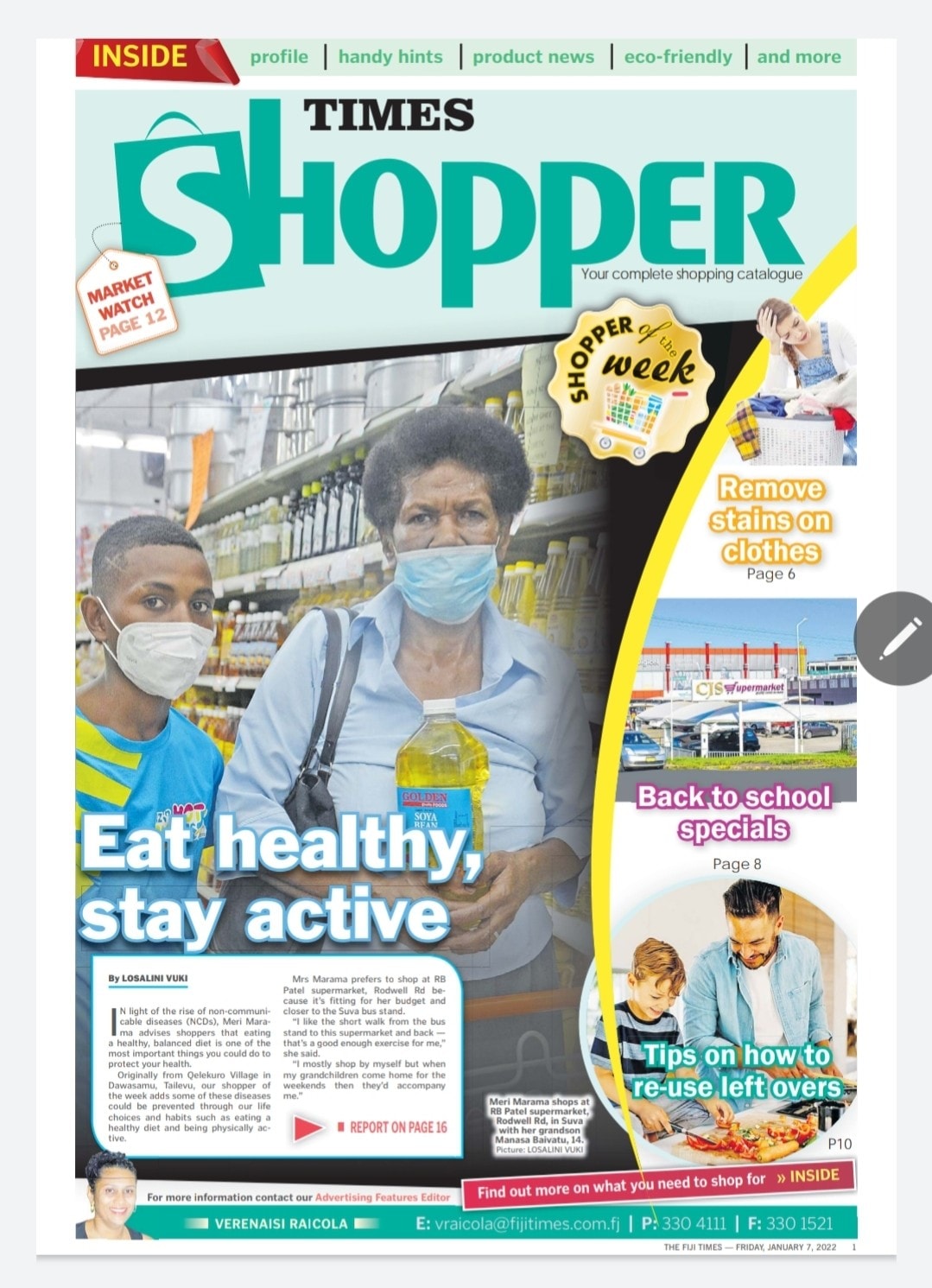 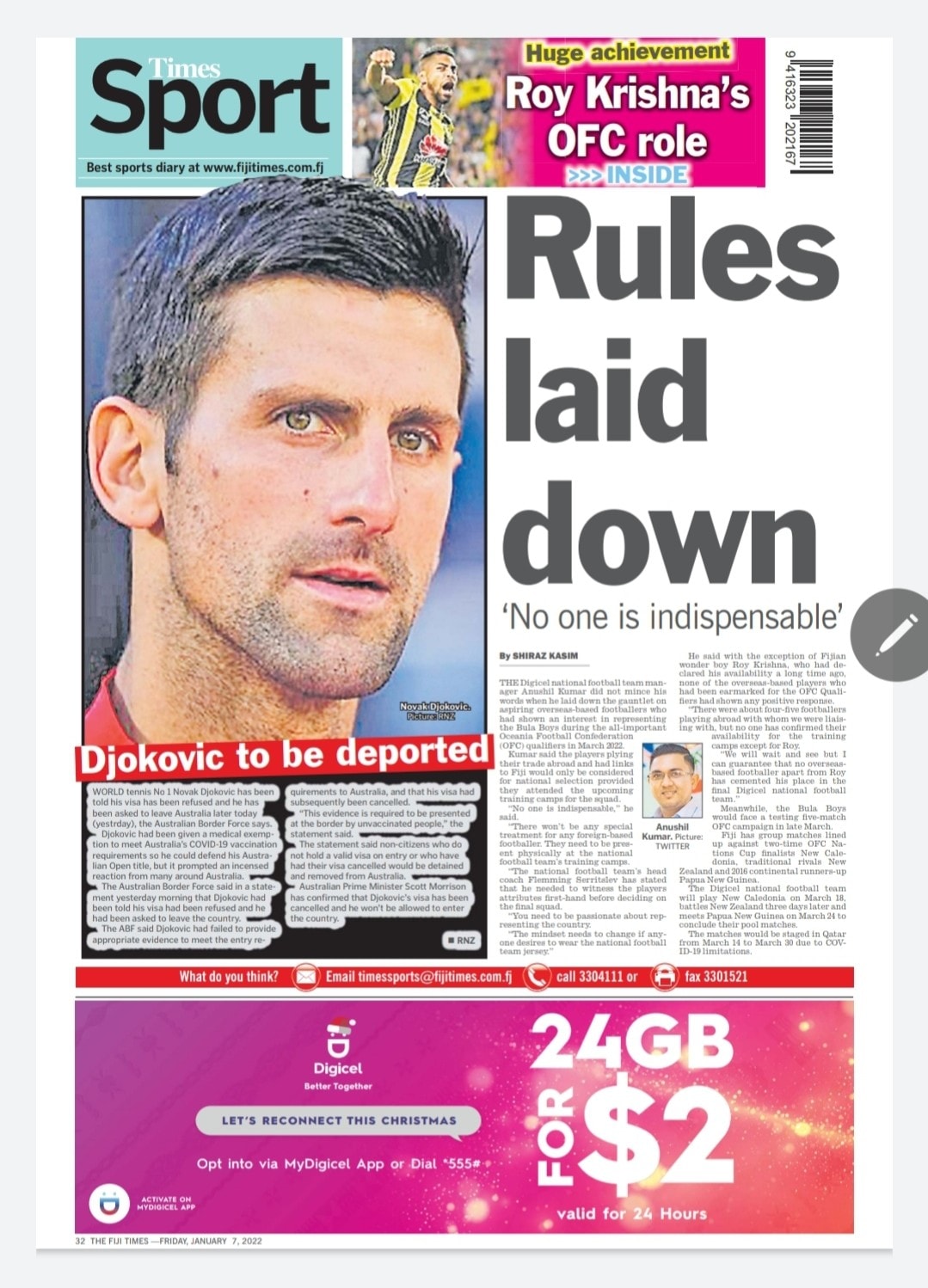 The big one on the back page is about soccer and the availability of overseas based players… and the OFC quàlifiers in March.