From the Editor-in-Chief’s desk: Your January 29 briefing 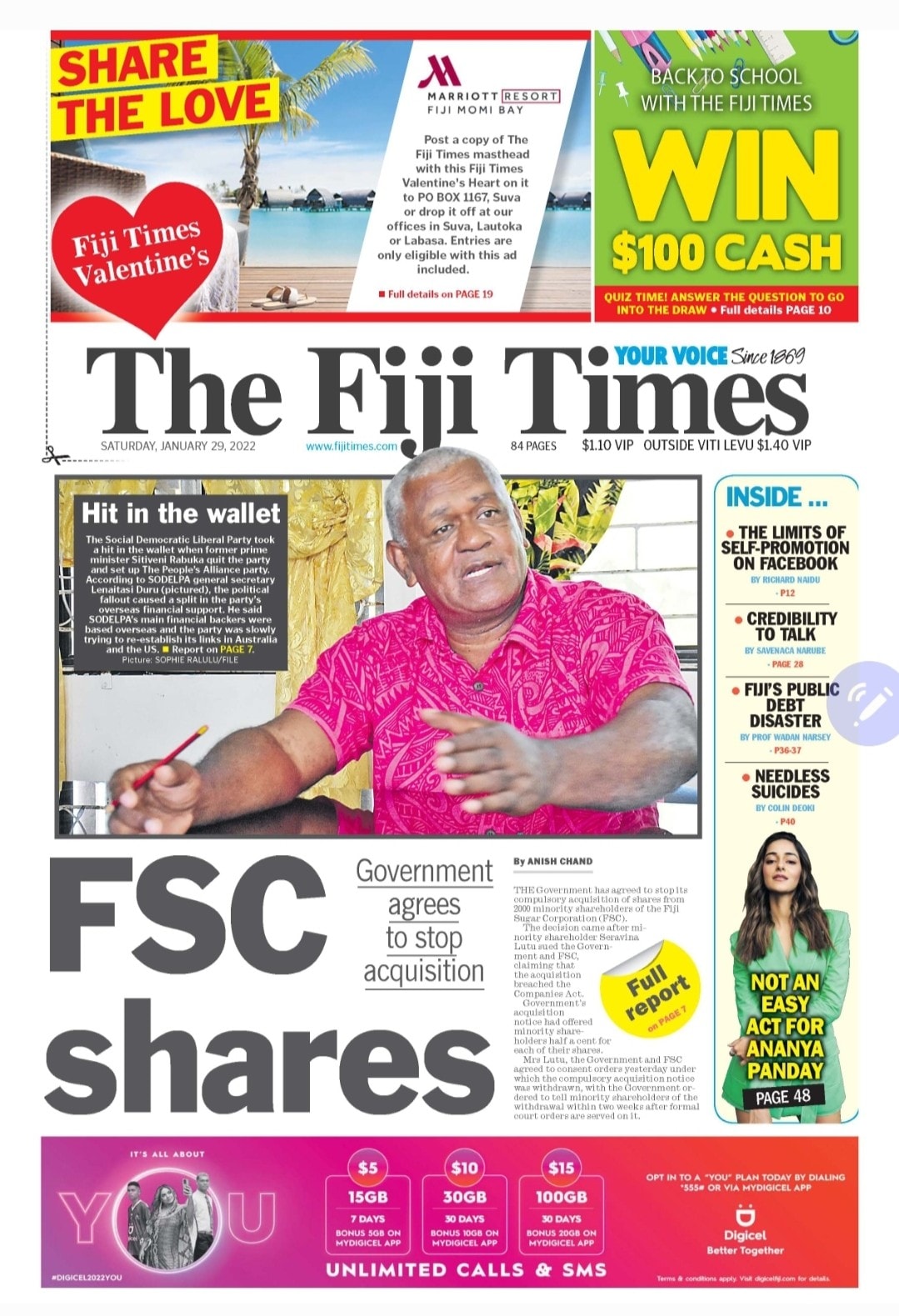 Here are some headlines that made The Fiji Times’ edition for Saturday, January 29.

But before that, we have a number of promotions running and you can win some great prizes including cash! Check inside the newspaper for details!

The Leader on Page 8 touches on our battle against COVID-19. There is complacency creeping in, and many Fijians are now flirting with danger and live in a false sense of security. So let’s unite and adhere to COVID-19 safety measures.

Hit in the wallet

THE Social Democratic and Liberal Party took a hit in the wallet when former prime minister Sitiveni Rabuka quit the party and set up the People’s Alliance Party. According to SODELPA general secretary Lenaitasi Duru the political fallout caused a split in the party’s overseas financial supporter.

The Government has agreed to stop its compulsory acquisition of shares from 2000 minority shareholders of the Fiji Sugar Corporation.

FIJI could have more COVID-19 testing sites managed by the private sector.

THE Fiji Independent Commission Against Corruption (FICAC) has concluded its investigation into a complaint by the leader of the Fiji Labour Party Mr Mahendra Chaudhry, leader of Freedom Alliance Mr Jagath Karunaratne and leader of Unity Fiji Mr Savenaca Narube.

THE Fiji Bus Operators Association says due to the 80 per cent bus carrying capacities, drivers have no option but to refuse students once they reached the required numbers of passengers.

THE Ministry of Health is expected to meet line ministries to discuss the impact of the COVID safe protocols on students’ ability to attend school.

FRUSTRATED and angry parents have called on authorities to look into the issue of stranded students due to the required 80 per cent capacity outlined in COVID safe procedures.

THE Ministry for Women, Children and Poverty Alleviation is working on providing shelters for the homeless and underprivileged in society.

THREE individuals below the age of 18 have so far succumbed to COVID-19 – the youngest a 10 day-old female infant.

THE Ministry of Education will go out of their way to create a comfortable learning environment for students around the country.

A total of 3706 students are receiving lunch assistance, facilitated by the Fiji Program Support Facility, which is sponsored by the Australia’s Department of Foreign Affairs and Trade (DFAT).

The Fijian Competition and Consumer Commission should specify how cane growers will benefit by up to $17 million through the 90cents per kilogram increase in sugar price.

The Fiji National University Students Association (FNUSA) has welcomed the increase in the price of sugar. FNUSA hopes it will save many Fijian lives.

Eating patterns and behaviour must change if we are going to prevent any further increase of non-communicable diseases in Fiji, says Minister for Womens, Children and Poverty Alleviation Rosy Akbar.

Many Non-Communicable Diseases patients attending SOPD Clinic’s at public health facilities have been defaulting their clinics because of the current COVID-19 situation.

No teacher should be out of school during school hours without taking official leave, said Permanent Secretary for Education Angeela Jokhan.

Justice Daniel Goundar will only make a determination on whether the Magistrates Court erred in transferring the sentencing of Freesoul Real Estate Limited to the High Court if he can be shown that he has jurisdiction to do so.

Former Prime Minister Sitiveni Rabuka took a chunk of the Social Democratic and Liberal Party’s financial supporters when he quit the party and formed the People’s Alliance Party. 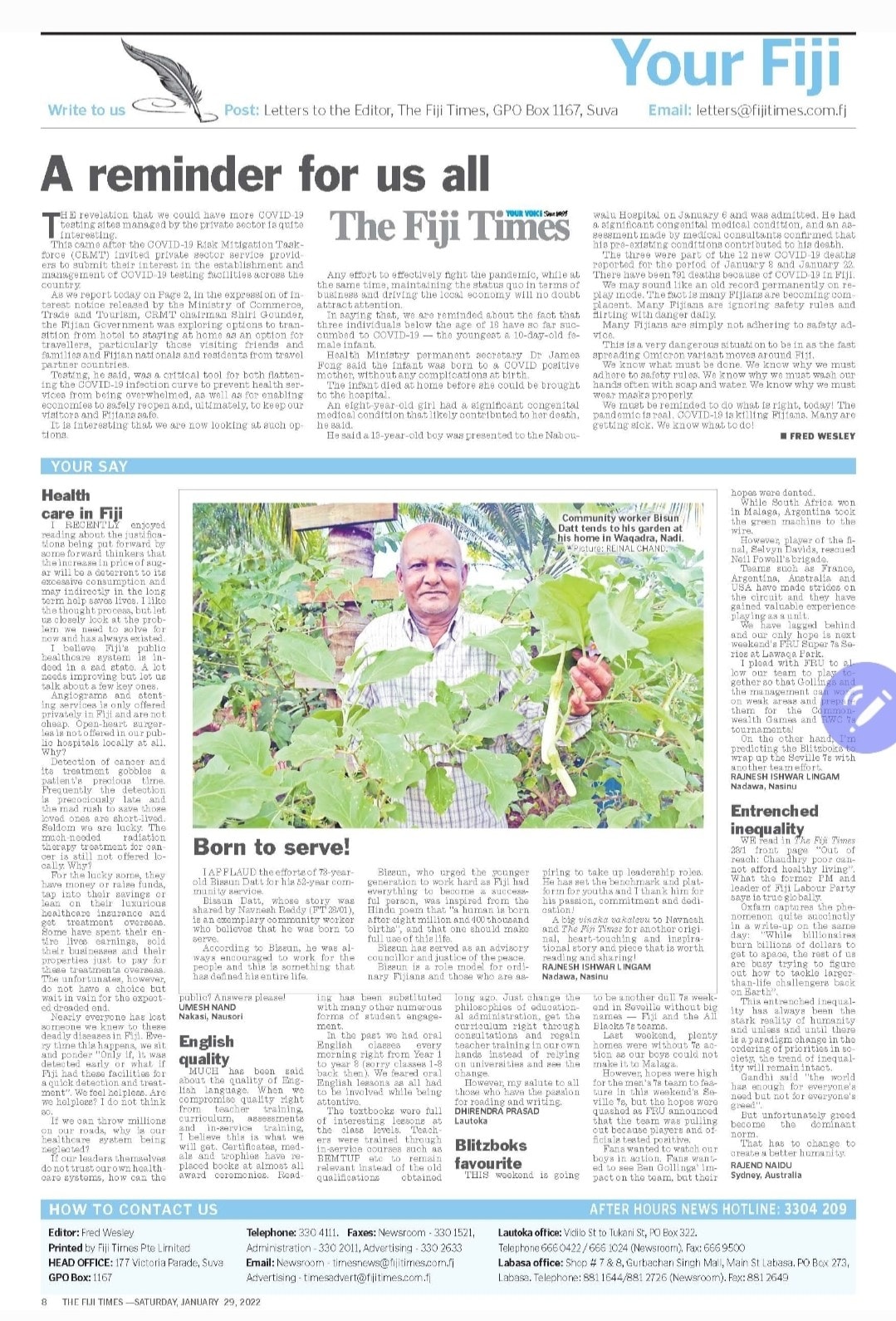 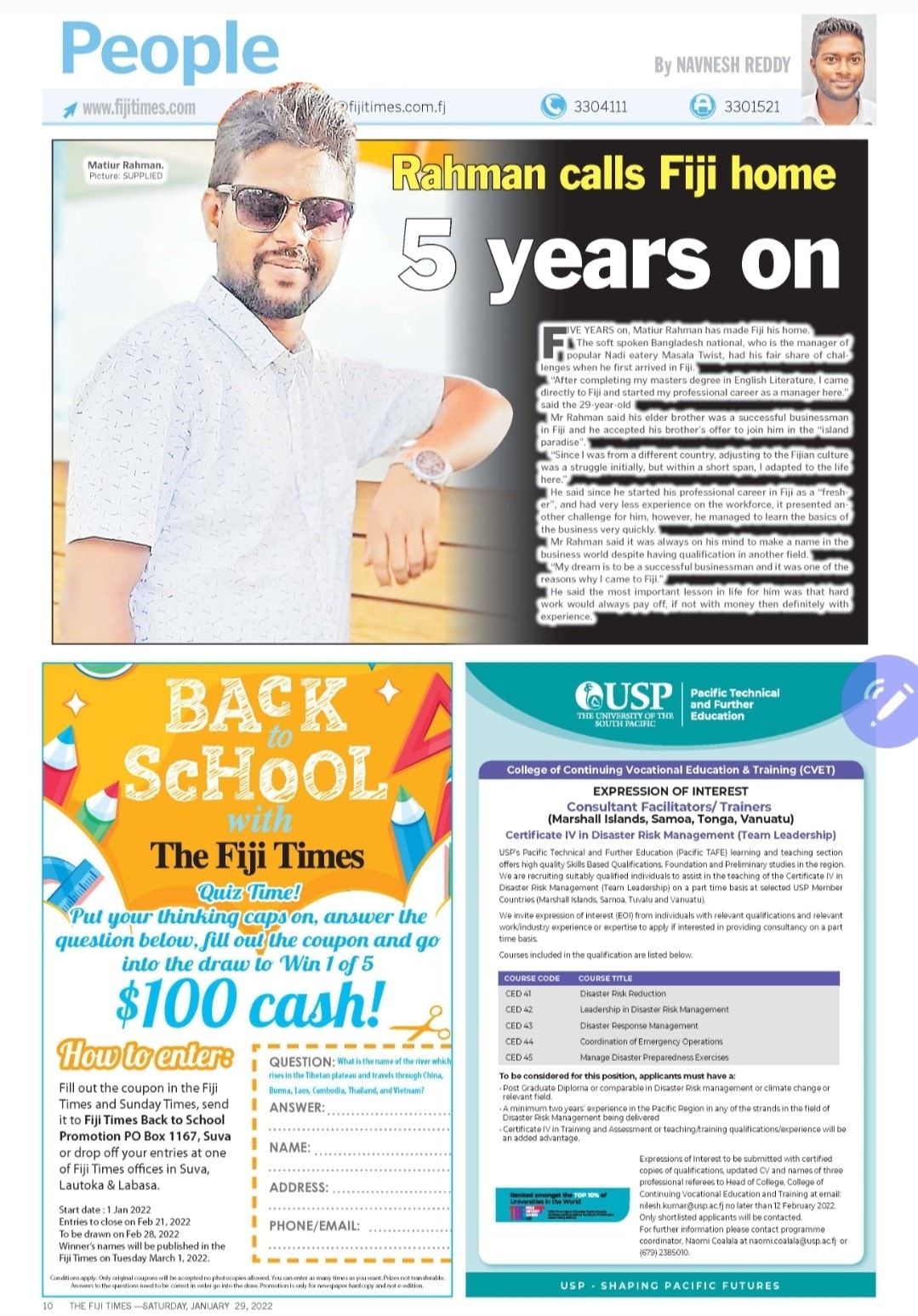 Engage in farming. This was the message rendered by Minister for Youth and Sports Parveen Kumar to youths of Dratabu Village, Nadi, on Wednesday.

Minister for Youth and Sports Parveen Kumar has called on members of the Qelema Youth Club to remain focussed.

SEVENTY per cent of Fiji’s population is below the age of 40, says Minister for Youth and Sports Parveen Kumar.

It’s the weekend and we have a strong lineup of quality articles for your reading pleasure.

SO, was the Prime Minister on the “frontline” on January 4 as the Government’s Facebook page said he was? Apparently not. A controversy blew up this week over the post – as well it should. In the first week of January, the FijiFirst Government was under political fire. Its ministers seemed to be missing in action as multiple mini-crises erupted around it. Suddenly, on the Governament of Fiji Facebook page there appeared a picture of the PM at some kind of checkpoint. “While our opponents were busy criticising the efforts of our hardworking frontliners from the comfort of their homes,” said the caption breathlessly, “Prime Minister Frank Bainimarama was on the ground working alongside them, ensuring the safety of our people and our beloved country!” Except the Prime Minister wasn’t. He wasn’t on the “front line”. He wasn’t anywhere.

ONE week ago, I issued a statement comparing the Government and Unity Fiji’s economic projections. In response, the Minister for the Economy tried not only to defend his projections, but also to discredit my understanding of how economic and financial systems work. For the record, my entire career is in the field of economics and finance. I have a post-graduate degree with honours in economics. I have worked at the World Bank and the International Monetary Fund in Washington DC. I was the permanent secretary for Finance and delivered many national budgets.

PAGE 30: Listen to the People – By AJAY BHAI AMRIT

LIKE all things in life, great timing often determines great decision making and leaving a positive impact on people. With the greatest and most successful leaders in history, their timing was spot on as they served the nation in the correct manner, which is serving the people and not themselves and also knew when to step down. Great Iconic names like Mahatma Gandhi and Nelson Mandela personify individuals who knew when to step away from the limelight at the right time.

THE president of the Methodist Church in Fiji, the Rev. Stanley Andrews, paid tribute to a murdered missionary teacher, Phyllis Furnivall when he opened a memorial appeal in Suva back in 1972. Ms Furnivall was killed in her house at the Methodist mission compound at Davuilevu, Nausori.

MANY government policies can be reversed when a new government comes into power. But sadly and disastrously, Fiji’s massive public debt, which has grown astronomically under this Bainimarama Government, is not a policy that can be reversed at the stroke of a pen or by putting a vote in the ballot box. Public debt, which is created by the previous and current generations, must be paid for by future generations.

FOR a tiny island nation such as our Fiji, sporting activities are at the heart of many Fijians. Although rugby has brought a lot of success compared to other sporting activities, we have continued to win hearts on the sporting field. Sports is in our blood and rugby is a religion to many.

WHAT’S the longest road in the world? It’s the Pan-American Highway that stretches from Prudhoe Bay in Alaska passing through Canada and goes south through the US, Mexico and Central America. Can you believe it’s a mind-boggling 19,000 miles long!

ELASTOGRAPHY is a non-invasive Ultrasound imaging technique that helps determine the stiffness or firmness of organs and other structures in your body. It is most commonly used to assess your liver. 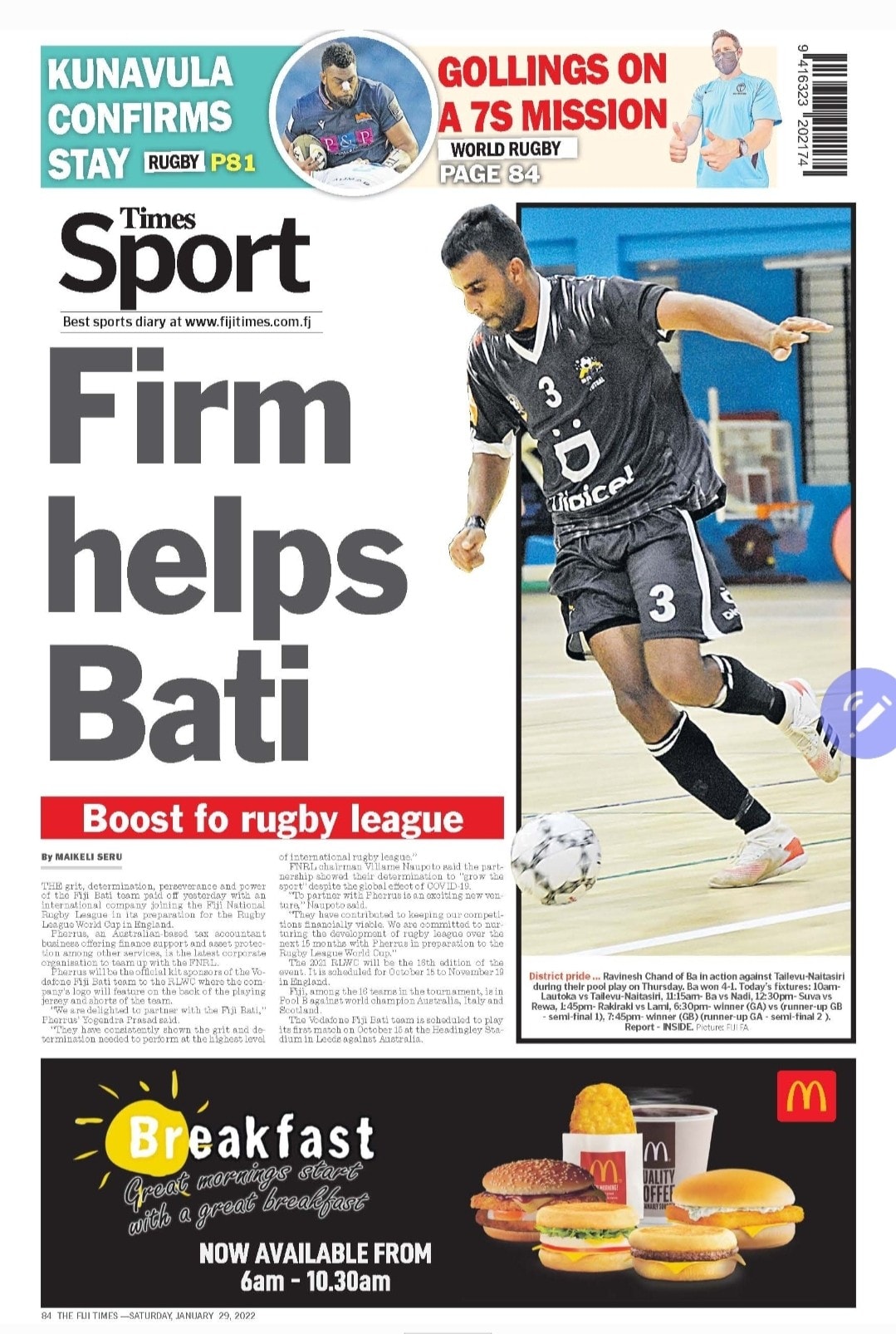