From the Editor-in Chief’s desk: Your January 21 briefing 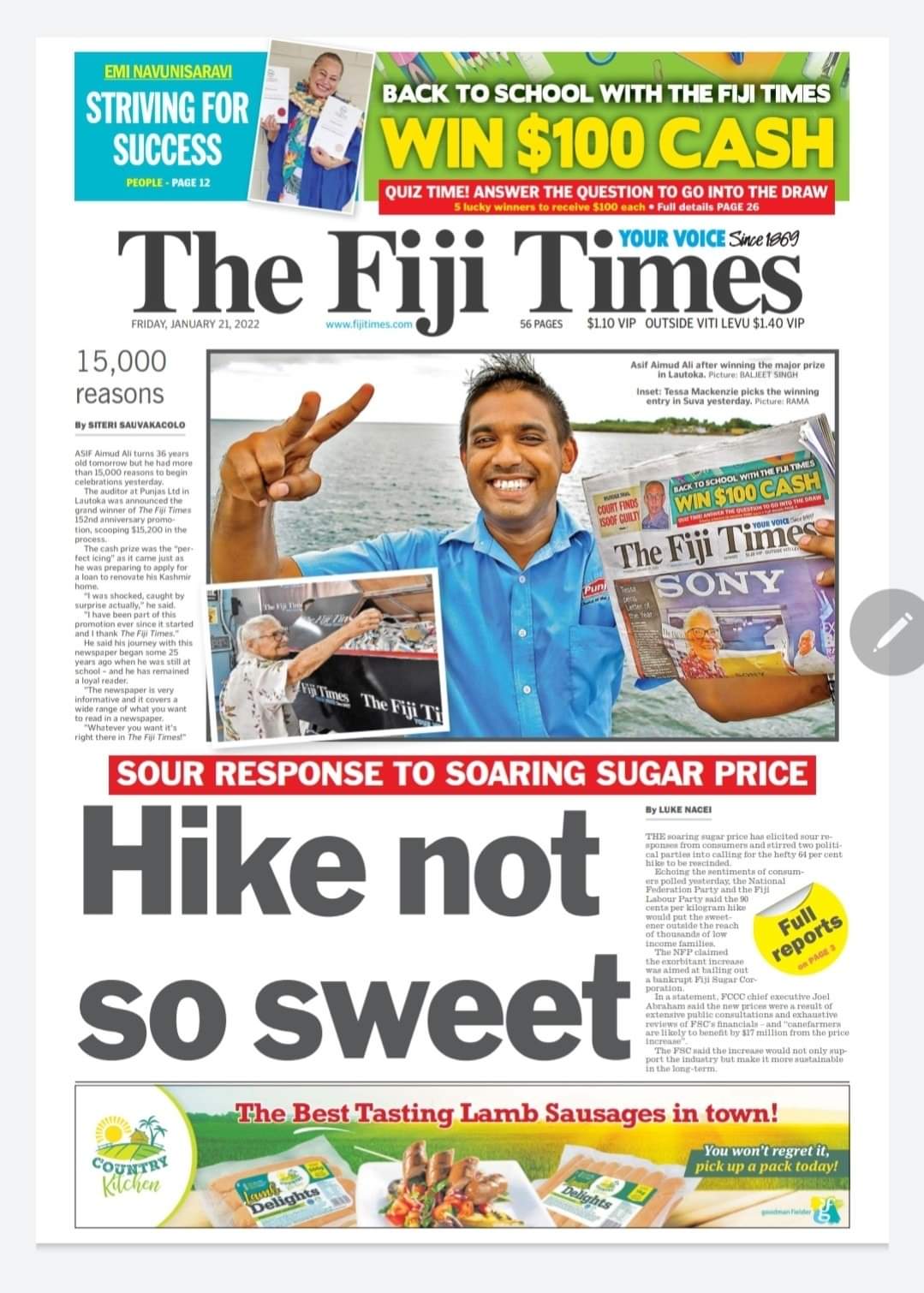 Bula
Here are some headlines that made The Fiji Times’ edition for Friday, January 21.
Before that though. ..

NEWSROOM
Dreaming about joining a newsroom? Want a break? Want to make a difference? Want to be part of a dedicated team of journalists? Do you have what it takes to ask the tough questions? We are looking for aspiring news and sports journalists, and sub-editors. Check out the adverts in The Fiji Times for details!

HEADLINES
PAGE 1
1. ASIF Aimud Ali turns 36 years old tomorrow but he had more than 15,000 reasons to begin celebrations yesterday. The auditor at Punjas Ltd in Lautoka was announced the grand winner of The Fiji Times 152nd anniversary promotion, scooping $15,200 in the
process.
2. THE soaring sugar price has elicited sour responses from consumers and stirred two political parties into calling for the hefty 64 per cent hike to be rescinded.

PG 2
1. $1M worth of sanitisers and dispensers donated to Health Ministry,
2. THE National Disaster Management Office’s emergency communication capabilities got a boost yesterday as a result of equipment donated by the New Zealand government.

PG 3
1. NATIONAL Federation Party leader Professor Biman Prasad claims the exorbitant increase in the price of sugar with the concurrence of the Fiji First Government is aimed at bailing out a bankrupt Fiji Sugar Corporation.
2. THE increase in the price of sugar by 90c per kg was unjustified and should be rescinded, Labour Leader Mahendra Chaudhry said.
3. THE price increase approval on sugar by the the Fijian Competition & Consumer Commission will support the industry, says Fiji Sugar Corporation CEO Bhan Singh.

PG 4
1. WHILE data indicated no signs of further underwater eruptions in the past few days, New Zealand volcanologist Professor Shame Cronin says the potential for further eruptions were real.
2. SIXTY five year old Vishnu Prasad of Mataniqara Settlement in Ba has lost more than $20,000 worth of vegetables to Tropical Cyclone Cody.
3. THERE are signs that two schools were affected by both the tsunami and ash fall caused by the Hunga Tonga underwater volcano eruption.

PG 7
1. POLICE are investigating a man who has allegedly been posing as a lawyer and obtaining money as fees for those seeking jobs in Australia and New Zealand.
2. A Suva High Court ruling on January 10 reveals Fiji Immigration Department had detained and deported an expatriate out of Fiji in December 2021 for not possessing valid permits to stay in Fiji.
3. A post-mortem yesterday of a male found dead inside a flat in Namaka, Nadi, on Tuesday afternoon will determine Police’s next course of action.
4. TWO juveniles who stole $217 worth of liquor from a restaurant in Sigatoka were handed 1 year and 10 months imprisonment, suspended for 3 years.
5. A company that tarsealed a road in Sigatoka has been ordered to pay $45,577 to a farmer for the damage of crop due to flooding.

PG 20
1. THE Government is working to allocate a piece of State land to relocate villagers of Nabavatu in Dreketi, Macuata.
2. THE National Disaster Management Office will need to verify the information first with other agencies before issuing tsunami warnings, says Disaster Management Minister Inia Seruiratu.
3. DIGICEL technicians in Fiji and Tonga have managed to restore mobile network connectivity between parts of Tonga and the world.
4. FIJI recorded 659 new cases of COVID-19 between Tuesday and Wednesday.
5. THE Pacific Sexual and Gender Diversity Network says the LGBTQI community are socially repressed and often excluded during national responses post natural disasters and are more likely to be socially isolated and face discrimination or harassment in settings such as emergency shelters.

PG 22
1. HEAVY rainfall in the coming months can cause further landslides and threaten three staff quarters at the Navunibitu Catholic Primary School in Rakiraki, said the school head-teacher Ricky Lesi.
2. PORT Denarau Marina (PDM) sustained no damage from Tropical Cyclone Cody. This was confirmed by it’s CEO Ms Cynthia Rasch.
3. CHANDRA Pal Singh of Mataniqara Settlement in Ba is contemplating the future of his sugar cane farm after he lost most of his subsidised fertilizer and a tractor to last week’s floods.
4. NEW opportunities have unfolded for villagers of Dogoi in Macuata who received a new fibre glass boat and an engine, after two years of waiting.

PG 24
1. VETERAN Horticulturist Sant Kumar has backed government’s recent proposal to develop industrial hemp farming in Fiji.
2. GOVERNMENT will continue to work closely with landowners and support them in cane farming initiatives, says Sugar Ministry Assistant Minister George Vegnathan.
3. THE Fiji Roads Authority has clarified that loading and unloading of goods along two main streets in Labasa Town is illegal.
4. TEN youths who received financial assistance last year from the iTaukei Land Trust Board are now “reaping what they sowed”.

1. Close to 20 coaches and referees of the Suva Volleyball Association – who work mainly with youths – participated in a three-day gender and child protection training program this week to make them aware of their roles and responsibilities.
2. The Pacific Sexual and Gender Diversity Network says the LGBTQI community are socially repressed and often excluded during national responses post natural disasters and are more likely to be socially isolated and face discrimination or harassment in settings such as emergency shelters.