From the Editor-in-Chief’s desk: Your August 18 briefing 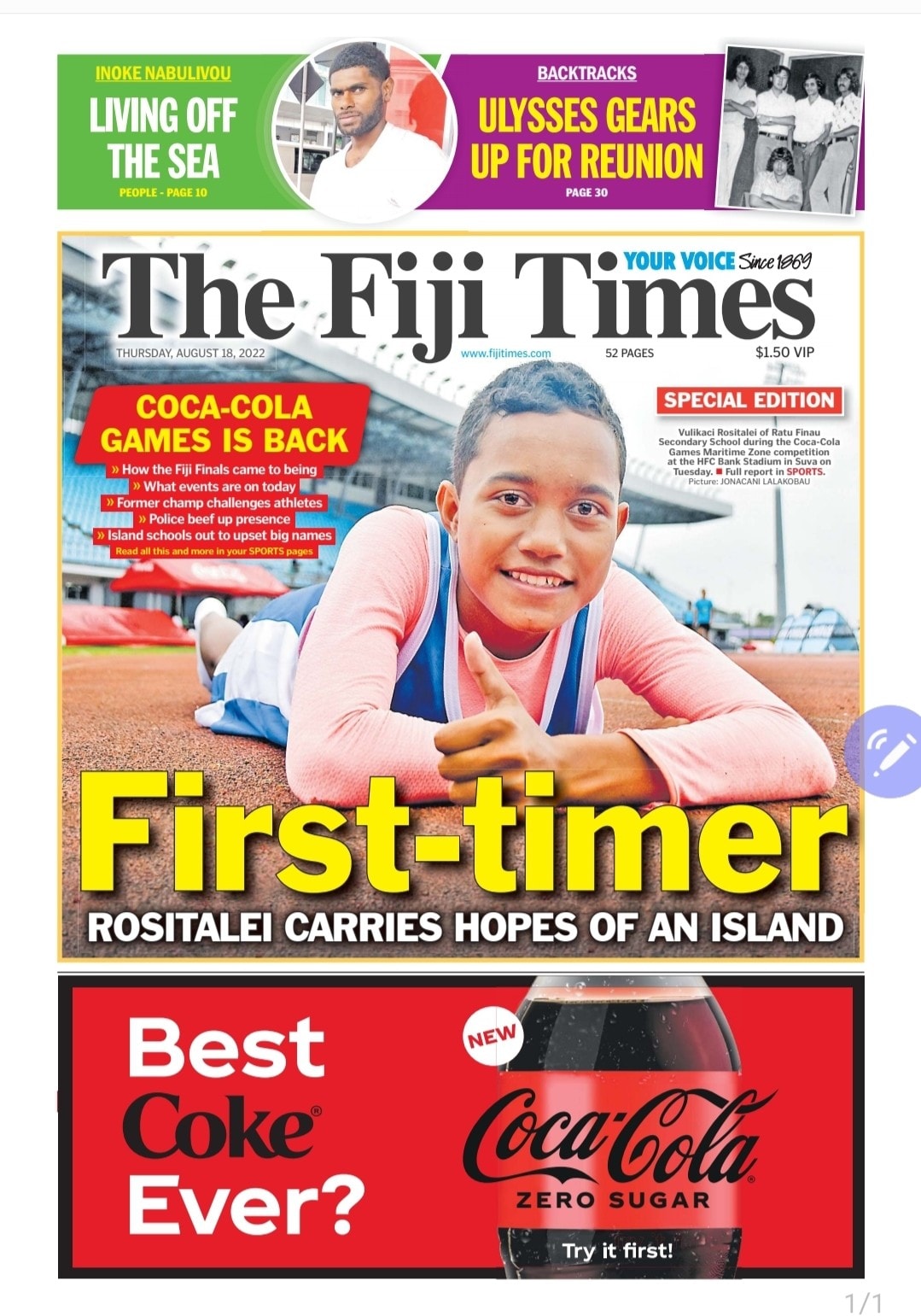 The big one on the front page of The Fiji Times’ edition for Thursday, August 18 is on glue sniffing and the interesting story about a lawyer who is nowhere to be seen.

We also have a wraparound focused on the Fiji Secondary Schools Athletics Finals in Suva.

After two years, we are finally here again.

We are now counting down the hours to the start of what is expected to be three exciting days of athletics action at the National Stadium in Suva. It’s Fiji Finals time!

The hype is building up. The magical atmosphere that surrounds the event is inching its way back very slowly.

But it is there!

The fans are headed here, into the Capital City for the 60th event.

The cheer squads are ready. And the army of student-athletes are raring to go. They are more than 3000 strong this year, and come from 260 schools around the country.

This is what young athletes dream about. It’s what they yearn to be a part of.

They are ready for their dance with the big boys and girls.

This is when the cream of our young athletes will display their potential, and show us what they are made of.

We wish all the athletes who will be participating this week the best and hope you will have positive memories of the 2022 Fiji Finals.

Here are some headlines inside.

JAI Maharaj moved to the farming community of Vakabalea, Navua, 22 years ago because it was “peaceful and quiet.” Lately, he has begun to have second thoughts after a spate of break-ins and thefts in the area.

RESIDENTS of Vakabalea near Navua are living in fear due to a spate of robberies in the area over the past few weeks. What has them in jitters is the fact that thieves are entering homes in the dead of night while the occupants are asleep.

THE People’s Alliance supports the rights and progress of all Fijians, party leader Sitiveni Rabuka said in a public apology to members of the public who may have been offended or insulted by an opinion piece that was shared on the party’s official Facebook page.

A 51-year-old man who recently returned from New Zealand was produced in the Rakiraki Magistrates Court charged with murder.

TWO elderly siblings who lost their Sabeto, Nadi, homes to a fire on Saturday are pleading for assistance to put a roof over their head.

THREE Lautoka fishermen who escaped certain death at sea when their boat capsized said they were traumatised by the experience.

THE Fiji Labour Party has rejected the Electoral Commission’s dismissal of the FLP’s complaints of alleged harassment by Police of attendees at a party campaign in Korovutu last month. 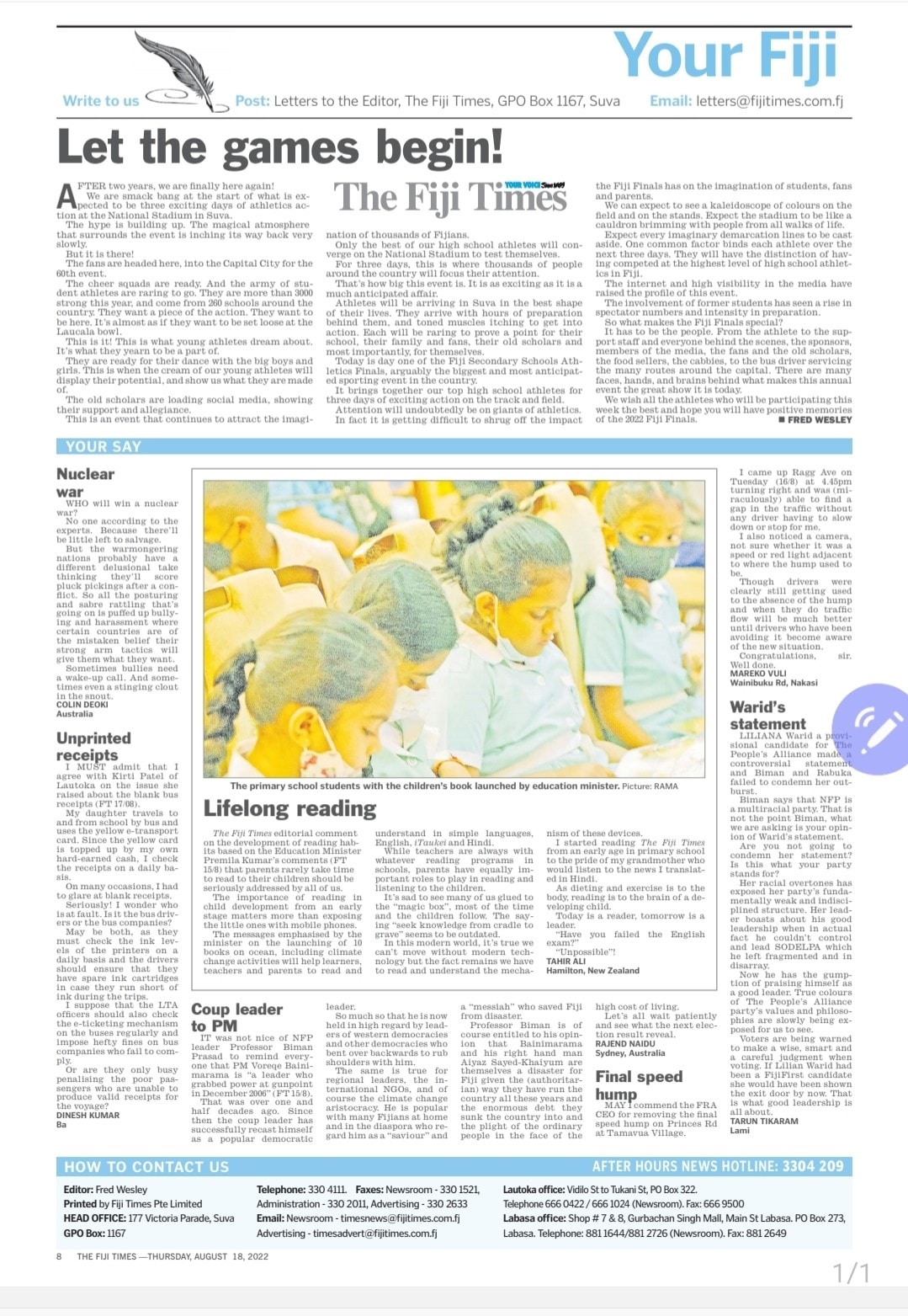 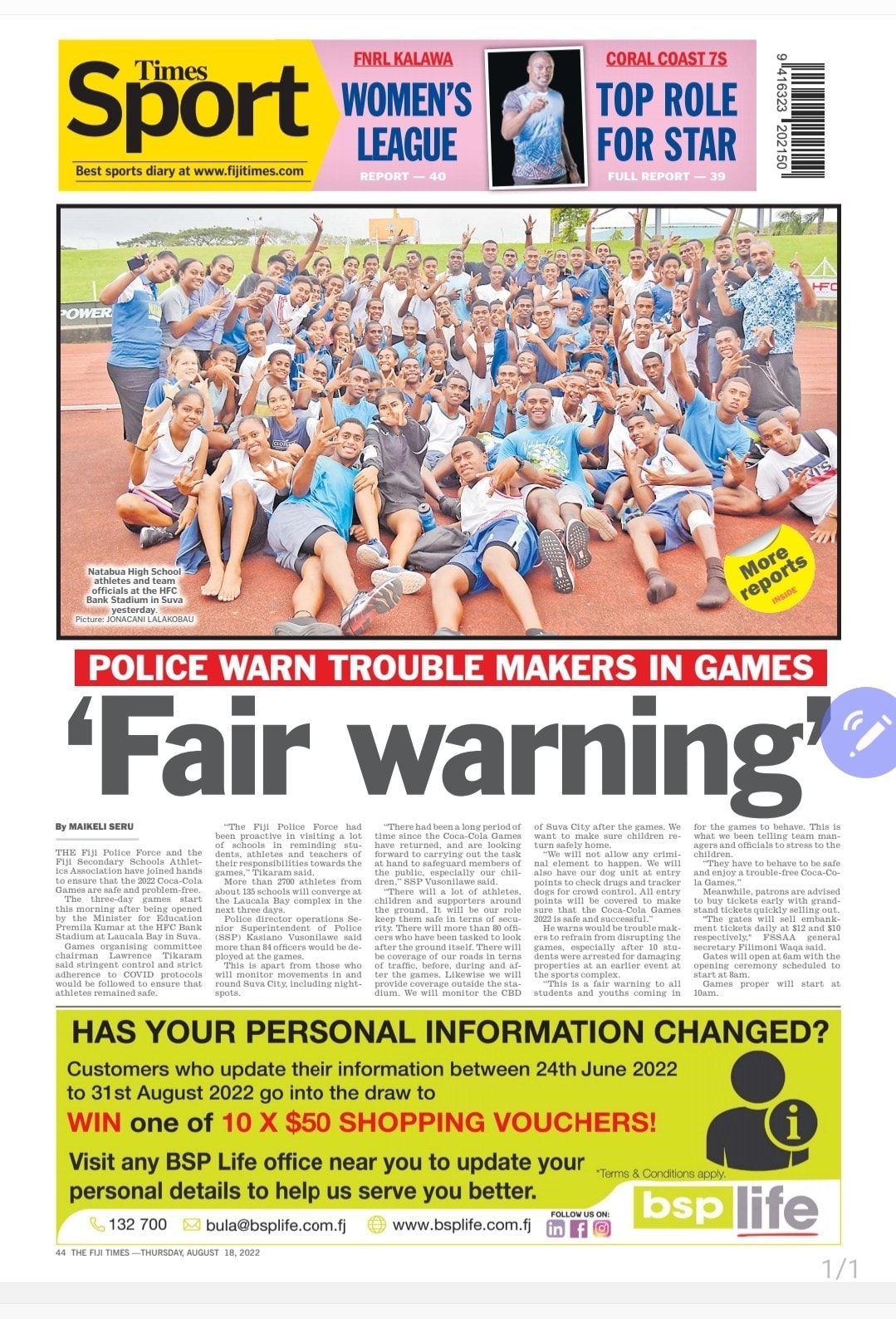 THE Fiji Police Force and the Fiji Secondary Schools Athletics Association have joined hands to ensure that the 2022 Coca-Cola Games are safe and problem-free.

BEAT me, writes Marica Likulawedua from Scotland yesterday. She is among the long standing record holders of the Fiji Finals, now known as the Coca-Cola Games. The former Fiji athletics rep holds the intermediate girls long jump record of 5.72 metres. She set the record in 1994 as a Dudley High School athlete at the national stadium in Suva, now called HFC Bank Stadium.