From shelf-stacking to an hour’s notice: Warrior’s whirlwind debut 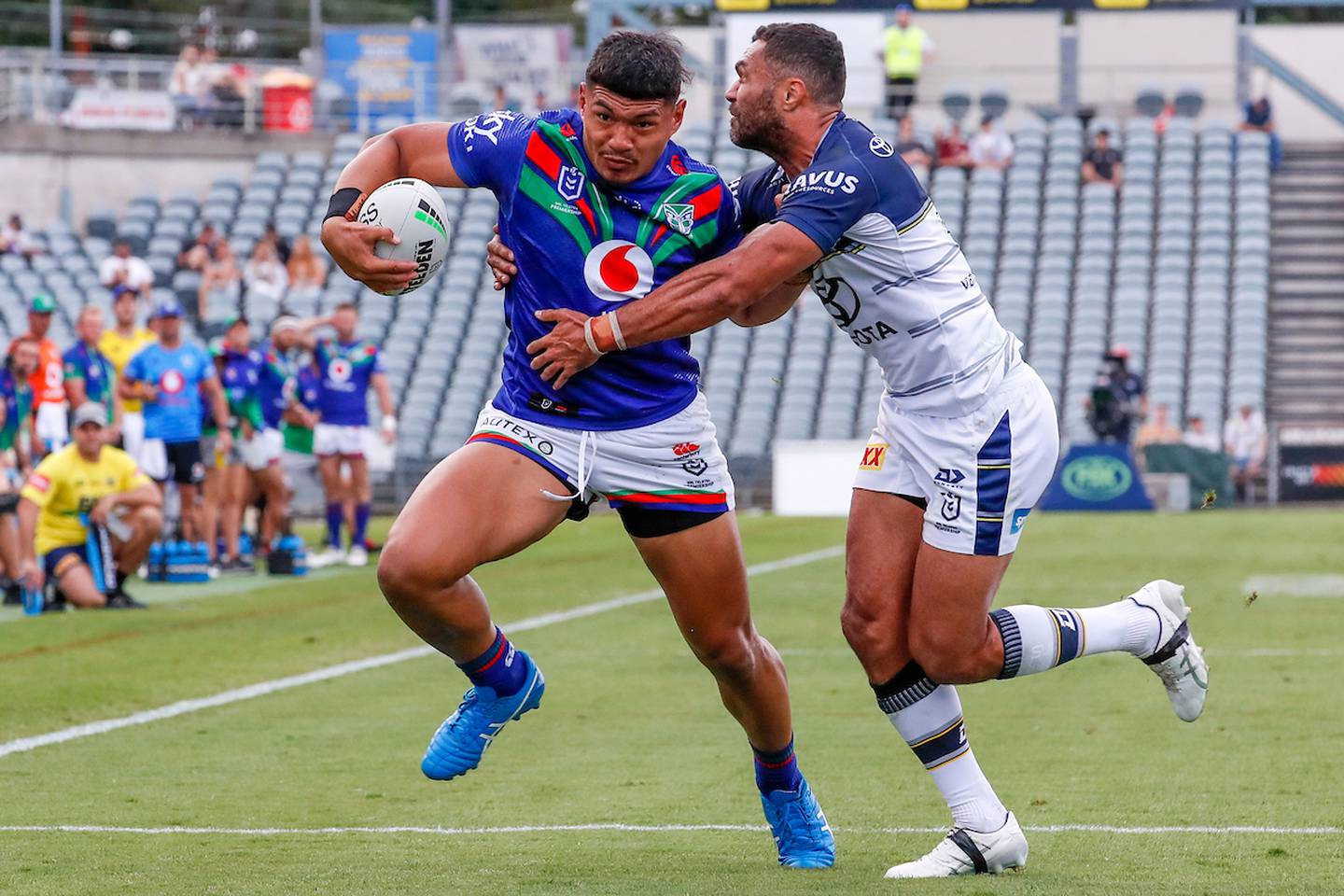 Ed Kosi on the burst against the Cowboys. Photo / Photosport

(NRL)—Less than a year ago, Warrior No.260 was sorting mail and packages in an Auckland warehouse for $19 an hour.

Less than two hours before kick-off in Gosford, rookie winger Ed Kosi was gearing up for nothing more than a stint in the stands as the Cowboys took on the nomadic Warriors.

But with veteran flyer David Fusitu’a losing the latest chapter in his fitness fight with his hamstring, the Warriors were granted an NRL exemption and coach Nathan Brown made the call.

And Kosi, the 22-year-old South Auckland-raised shelf stacker no more, was soon doing the same to a pair of proud parents, urging them to tune in for the most memorable of afternoons.

While Tigers rookie Zac Cini melted hearts with his mullet and 100-odd family and friends raising the roof in Wollongong, Kosi’s own tale of perseverance is equally worthy of celebration.

“Last year I was working with my younger brothers on night shifts,” Kosi told NRL.com, beaming after a tense 24-20 defeat of North Queensland.

“We were all working at a courier’s warehouse in Auckland, just packing boxes and mail all night.

“I’d work 9pm to 6 in the morning, it was a pretty full-on work schedule.

“I’d have my local games on a Saturday so I’d take Friday night off to try and get my body clock right.

“Last year I was playing in the local Fox Memorial [competition] and I was overweight. I was 110 kilos and I looked like a prop.

“Browny pulled me in on the first day of pre-season last November. I was overweight and he was pretty blunt – ‘if you want to play first grade you need to lose the weight’.

“It’s crazy to think where I was at last year. I was wondering if I’d ever play first grade. To fast forward to now, I’m down to 103 kilos and with that game and that win, I’m so grateful.”

With Kosi only getting the NRL nod on game-day, nerves were kept to a minimum, even if emotions on the other side of the Tasman weren’t.

“I found out I was playing maybe an hour or two before the game,” he said.

“I couldn’t believe [it] and Mum and Dad are back home so I called them when I was on the bus to the ground.

“They’d just finished church and mum was just crying when I told her. I Facetimed mum and my old man, they couldn’t believe it either and just wished me well.

“The boys just reminded me that I was there to do my job, just to run hard and make good decisions on the edge.

“I was just trying to bury those nerves. I was alright coming in and all through prep, once I ran out there I thought my legs were going to give way. I was just telling myself ‘it’s a normal game, get that first touch’.”

Having started at the Warriors in 2018 and graduated through to feeder side Redcliffe this season, he and fellow rookie Rocco Berry were suddenly forming the rawest of right edges.

Kosi is signed on a Warriors development deal until the end of next season.

Berry, meanwhile, has been rated in the highest esteem since being lured to the Kiwi club despite boasting a first-class pedigree in the 15-man code as the son of former All Black Marty.

On Monday the Warriors announced a new extension for the 19-year-old until the end of 2024, coming after just his second NRL outing, and first try against the Cowboys.

He and Kosi were targeted as Scott Drinkwater dragged North Queensland back from a 20-point deficit, but coach Nathan Brown had nothing but praise for how the youngsters handled the rarely encountered pressure.

“It’s his second first grade one, he’s played seven games all up in his whole life. That’s the context of where he’s at in his career and we see him as a long-term player for the club.

“[Kosi and Berry] had their moments … They probably came up best actually in the last 15 minutes when the game was right on the line – one more try and we would’ve been beaten.

“Credit to them, they got it right. They had a couple of moments there that they’ll look at and think to be a good first grader, that they need to do better.”