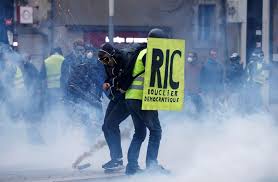 PARIS (Reuters) – Thousands of “yellow vest” demonstrators marched in Paris and other French cities on Saturday in protests that brought sporadic clashes with police and suggested that President Emmanuel Macron has yet to defuse public discontent.

On the 11th consecutive weekend of action against the government, 69,000 people took to the streets, including 4,000 in Paris, the interior ministry said, down from an estimated 84,000 demonstrators across the country last Saturday.

Marches were mostly peaceful but there were incidents in several towns, including in the capital, where an eye injury to a well-known “yellow vest” activist added to recent controversy over police violence.

The protesters – who wear the fluorescent jackets French motorists are required to carry in their cars – came out onto the streets in November to oppose a planned fuel tax rise. Their movement then developed into a broader revolt against the government that mobilized tens of thousands each weekend.

In Paris, several processions crossed the capital, with one descending the famous Champs-Elysees avenue that has been the scene of protests every weekend, before converging in Bastille square.

The police said they made 52 arrests in Paris.

In the southwest, brief clashes also took place in Bordeaux and Toulouse, which have been focal points of the movement.

“I condemn as firmly as possible the violence and damage caused again this Saturday, both in Paris and in the regions, by vandals disguised as ‘yellow vests,’” Interior Minister Christophe Castaner wrote on Twitter.

However, he announced an internal police investigation had been launched after a protester was injured at Bastille. TV images and the victim’s Facebook page showed that Jerome Rodrigues, a prominent figure in the grassroots movement, had been wounded in the eye.

Tension also arose in Paris as an authorized evening gathering, dubbed “Yellow Night,” at Republic square was curtailed by police as they quickly moved in to disperse protesters.

Incidents were nonetheless minor compared with the violence seen in December – the worst trouble of its kind in decades in Paris.

As in previous weeks, protesters carried French flags and held signs attacking “King Macron” as out of touch or calling for referendums tabled by ordinary citizens.

To help quell discontent, Macron this month launched a series of public debates that he promised will lead to measures.