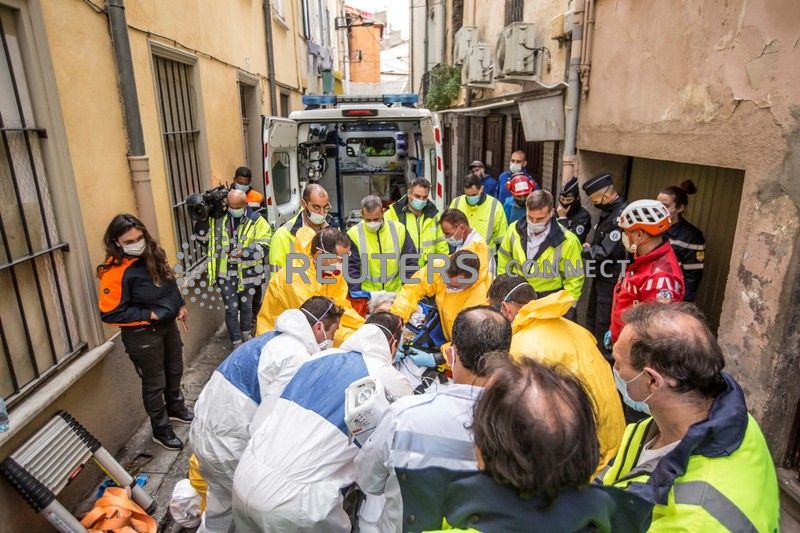 Firefighters and rescue units use a crane to lift a 52-year old man weighting 300kg, suffering from obesity, from his apartment in Perpignan, France December 1, 2020. SDIS66/Guillaume Collard/Handout via REUTERS

PERPIGNAN, France (Reuters) – French rescuers had to go to extremes to evacuate a man suffering from morbid obesity from his flat on Tuesday, after he was immobilized in his home following an accident last year.

Some 50 rescuers and a crane were used in the operation in the southern city of Perpignan. Estimated to weigh between 250 and 300 kilos (550 lbs to 660 lbs), the man, identified as “Alain P.” had been unable to move from the floor after falling out of bed a year ago. He will now be hospitalised for several months as doctors tend to his needs and try and help him lose body fat.

Alain P. was eventually lifted out of the flat in a large container, after workers demolished the facade to gain access. Rescuers used an inflatable cushion to lift the patient.

A first attempt to evacuate him last December failed after the man refused for fear of losing his flat, rescuers said.

Mustapha Sebanne, the head doctor at Montpellier’s emergency services, said rescuers had coached him to try and help him out.

“He’s scared of this extraction. We understand, and now we’ve worked with him to get him in the right frame of mind, there’s a form of trust between us,” Sebanne said.