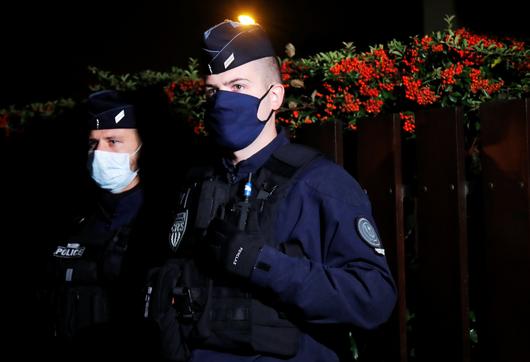 FILE PHOTO: Police officers secure the area near the scene of a stabbing attack in the Paris suburb of Conflans St Honorine, France, October 16, 2020. REUTERS/Charles Platiau

PARIS (Reuters) – The teenager identified by prosecutors as Abdoulakh A. lived with his family and had never appeared on the radar of French intelligence agencies. But he propelled himself into their sights in horrific manner on Friday evening when he beheaded a school teacher in broad daylight.

The 18-year-old had a record of juvenile delinquency but was too young for police to have built up a file on him. He lived in a Chechen community that is not well understood by intelligence services.

He used a knife to decapitate the middle school history teacher, Samuel Paty, who had shown cartoons mocking the Prophet Mohammad to his students in a class on freedom of expression. He was shot dead by police minutes after the attack in a Paris suburb.

The profile of the attacker, as recounted by law-enforcement officials, illustrates the difficulties security agencies face identifying would-be attackers who are often exposed to extreme ideology on the internet and whose contacts with other Islamist militants, if they have any, may have been purely virtual.

The government says about 20,000 people in France are on the intelligence agencies’ “Fiche S”, a watchlist of people of posing a security risk to the country. Only a small number of these are under active surveillance.

Abdoulakh A. was not on the list at all, police sources said.

This is not the first time intelligence services have been blindsided like this.

The 25-year-old Pakistani man who wounded two people last month in a meatcleaver attack outside the former Paris office of the satirical magazine Charlie Hebdo, which published cartoons lampooning the Prophet Mohammad, was not on the Fiche S list.

Nor was the IT worker with the Paris police force who knifed four colleagues to death a year earlier.