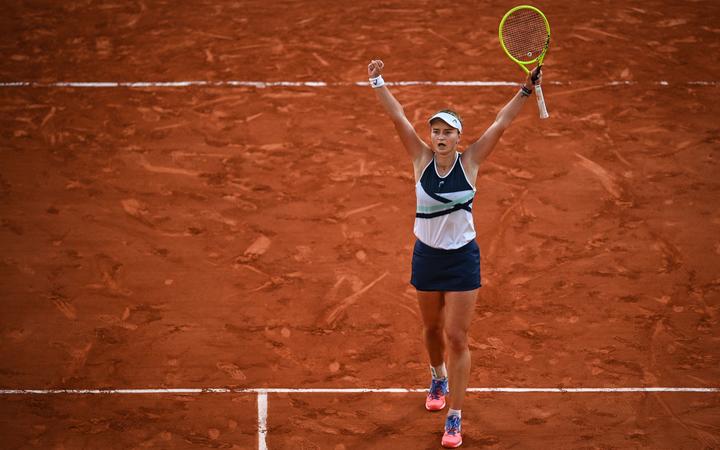 The world number 33 struggled with nerves throughout but eventually proved more consistent than Sakkari, who got tight when she served for the match at 5-4 in the third set.

She will be looking to emulate fellow Czech Hana Mandlikova, who won the title at Roland Garros in 1981.

“When I was young, a junior, I wanted to play matches like this, such challenging matches. We both had our chances,” said Krejcikova.

“Even if I had lost today I would have been proud of myself. I was just fighting, that’s the most important.”

The 29-year-old’s 7-5 6-3 win made her the woman with the most attempts ever needed to reach the final of one of the four majors.

It was reward for her patience throughout a career that has earned her 12 titles but none on the biggest of stages, and also for her calmness against a player who blew hot and cold.

“I am so tired and so happy, it is very emotional,” Pavlyuchenkova said on a sunlit Court Philippe Chatrier.

“It was difficult, I tried to fight very hard and to work on the tactical side. It is important to stay focused and in the right zone for the final on Saturday.”

There was little by way of celebration for Pavlyuchenkova who looked relived more than anything as she became the first Russian woman to reach a Grand Slam final since Maria Sharapova lost to Serena Williams at the 2015 Australian Open.

“She was able to control the match tactically,” former Wimbledon champion Marion Bartoli, summarising for ITV Sport, said. “Not everyone can win their first Grand Slam at 19 or 20 years of age. If she can grab the moment and make that title hers she will deserve it entirely.”