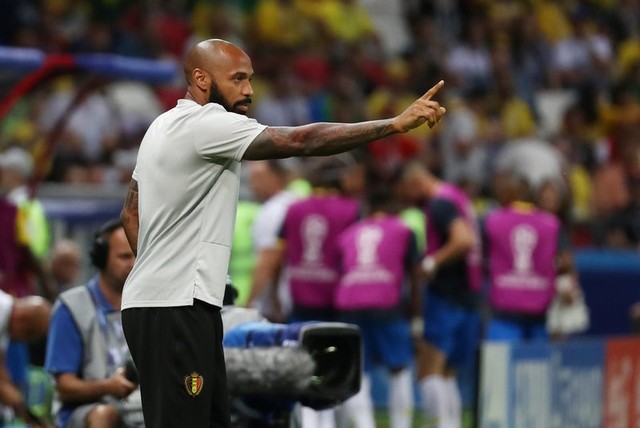 ST PETERSBURG (Reuters) – The irony of Thierry Henry, one of France’s all-time soccer greats, plotting his own country’s downfall at the World Cup in Russia has not been lost on his former team mate Didier Deschamps, who calls it a bizarre situation.

When France go up against Belgium in the World Cup semi-final at the Saint Petersburg Stadium on Tuesday, the 40-year-old Henry will be on the opposing bench, looking to stop his country from advancing to Sunday’s final.

Up against him is Deschamps, who he played alongside in France’s 1998 World Cup-winning squad and who has been Les Bleus’ coach for the last six years.

“It’s bizarre because he’s French and will be on the opponent’s bench,” Deschamps said on Sunday on the French sports show Telefoot.

“But he is someone I really appreciate, I’m happy for him.”

But for the last two years he has been serving as one of Belgium coach Roberto Martinez’s assistants, his first foray into coaching and seemingly an inspired choice if the rare reviews from the Belgian players are anything to go by.

“Thierry Henry is really important for us. He tells us stories from his playing days and they inspire us. If he says something, it always turns out to be something helpful. His presence, his World Cup experience, it is all a very positive influence,” said defender Toby Alderweireld before the start of the tournament.

“He will want us to come out on top,” added Kevin De Bruyne after Belgium beat Brazil on Friday to book their semi-final spot. “He always tries to help us win games.”

Martinez had predicted last year, after Belgium became the first team to qualify from the European preliminaries, that Henry would have a positive impact on the Belgian players at the tournament.

“He has brought us that important element of experience,” the coach said on Friday.

But France feel Henry will be happy with any outcome on Tuesday.

“If we win, he will also be happy because ultimately he is a Frenchman,” said France defender Lucas Hernandez on Saturday.

“All France knows him, what a great player he was and what an icon for football. We just hope he doesn’t beat us in this semi-final.”