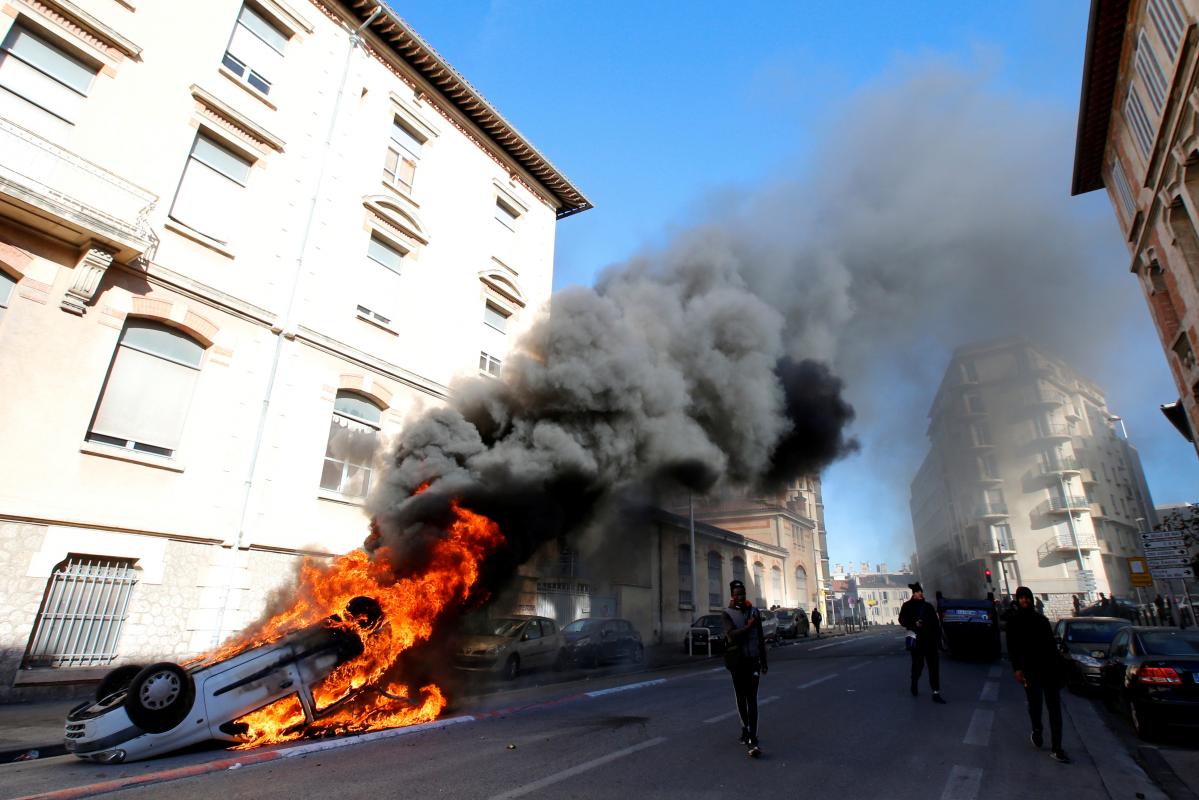 A burning car is seen in the street as youths and high-school students clash with police during a demonstration against the French government's reform plan in Marseille, France, December 6, 2018. REUTERS/Jean-Paul Pelissier

PARIS (Reuters) – The French government hinted at more concessions to ‘yellow vest’ protesters on Thursday in a bid to head off another wave of violence in the capital over living costs and regain the initiative after weeks of civil unrest.

With protesters calling on social media for “Act IV” – a fourth weekend of protest – Prime Minister Edouard Philippe said 65,000 police would be drafted in to stop a repeat of last Saturday’s mayhem in Paris when rioters torched cars and looted shops off the famed Champs Elysees boulevard.

Philippe told the Senate he was open to new measures to help the lowest-paid workers. Finance Minister Bruno Le Maire said he was prepared to accelerate tax cuts for households and that he wanted workers’ bonuses to be tax-free.

“I am ready to look at all measures that will help raise the pay of those on the minimum wage without doing excessive damage to our competitiveness and businesses,” Philippe told the parliament’s upper house.

Yet, five days after the worst rioting central Paris has seen since 1968, all signs are that the government has failed to quell the revolt.

A repeat of last Saturday’s violence in Paris’s city center — which saw rioters deface the Arc de Triomphe with anti-Macron graffiti — would deal a blow to the economy and raise doubts over the government’s survival.

Philippe said the state would do all it could to maintain order. At least four first division football matches have been canceled and several museums including Paris’ Grand Palais said they would close.

An official in Macron’s office said intelligence suggested some protesters would come to the capital with the aim to “vandalize and kill”. There is concern about far-right, anarchist and anti-capitalist groups like the Black Bloc, which have piggybacked off the ‘yellow vest’ movement.

The Paris prefecture on Thursday told restaurants and luxury boutiques along the Champs Elysees boulevard to close on Saturday and asked local Paris authorities to prepare their districts for violence.

On Facebook and across social media, protesters are calling for “Act IV”.

“France is fed up!! We will be there in bigger numbers, stronger, standing up for French people. Meet in Paris on Dec. 8,” read one group’s banner.

The protests, named after the fluorescent safety jackets French motorists have to keep in their cars, erupted in November over the squeeze on household budgets caused by fuel taxes. Demonstrations swiftly grew into a broad, sometimes-violent rebellion against Macron, with no formal leader.

Their demands are diverse and include lower taxes, higher salaries, cheaper energy costs, better retirement provisions and even Macron’s resignation.

Reversing course on next year’s fuel-tax hikes have left a gaping 4 billion euro hole in the government’s 2019 budget which it is now searching for ways to plug.

The unrest has exposed the deep-seated resentment among non-city dwellers that Macron is out-of-touch with the hard-pressed middle class and blue-collar workers. They see the 40-year-old former investment banker as closer to big business.

An Elabe poll on Thursday showed that only 23 percent of people trusted Macron, now lower than his predecessor Francois Hollande at the same period in his presidency.

Trouble is also brewing elsewhere for Macron. Teenage students on Thursday blocked access to more than 200 high schools across the country, burnt garbage bins and setting alight a car in the western city of Nantes. Hundreds of students were arrested after clashes with riot police.

Meanwhile, farmers who have long complained that retailers are squeezing their margins and are furious over a delay to the planned rise in minimum food prices, and truckers are threatening to strike from Sunday.

Le Maire said France was no longer spared from the wave of populism that has swept across Europe.

“It’s only that in France, it’s not manifesting itself at the ballot box, but in the streets.”