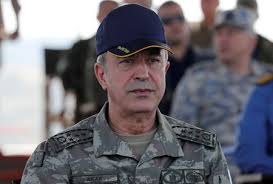 FILE PHOTO: Turkey's Hulusi Akar, when he was chief of the general staff, during the EFES-2018 military exercise near the Aegean port city of Izmir, Turkey May 10, 2018. REUTERS/Osman Orsal/File Photo