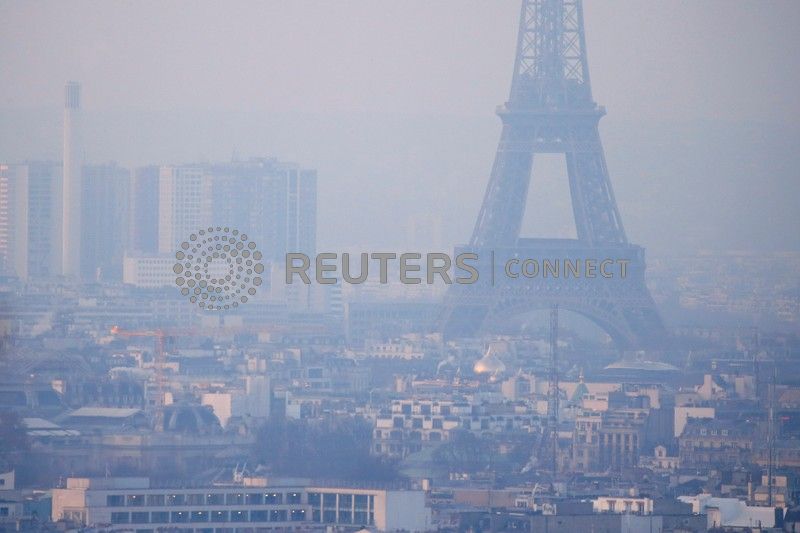 FILE PHOTO: The Eiffel Tower is surrounded by a small-particle haze which hangs above the skyline in Paris, France, December 9, 2016 as the City of Light experienced the worst air pollution in a decade. REUTERS/Gonzalo Fuentes/File Photo

PARIS (Reuters) – The French state is responsible for the air pollution in the Ile-de-France region around Paris, a local court said in a ground-breaking ruling, although it did not award damages to a mother and daughter who had suffered respiratory ailments.

The administrative court of Montreuil, a suburb of Paris, ruled the state was responsible for failing to prevent heavy air pollution in and around Paris in the 2012-2016 period, when a local resident contracted bronchitis and her daughter asthma.

“The state was deficient in not taking sufficient measures to remedy the situation,” the court ruling read.

Paris regularly goes through periods of high pollution, especially during heat waves, but requests by Paris city hall to temporarily ban polluting vehicles from entering the city centre often take a long time to be implemented by the government.

The court ruled that the plaintiff had not provided sufficient proof to establish a direct link between the Paris air pollution and her and her daughter’s health problems and rejected her claims for compensation.

But in the first such ruling in France, the court said the state had repeatedly failed to take sufficient measures to prevent pollution from rising above government-set thresholds.

“The state’s responsibility has been established. That is a first in France for victims of air pollution and it opens the door to compensation in the future,” the plaintiff’s lawyer Francois Lafforgue told Reuters.

French daily Le Monde reported that the plaintiffs — who now live in the city of Orleans and no longer have respiratory problems — had filed for damages of 160,000 euros (143,315 pounds).

In recent years, the European Commission has repeatedly criticised France for not respecting EU air quality norms and last year took France to the European Court of Justice.

The French court ruling comes as unusually hot weather has led the city of Paris to issue new warnings about air quality and to ban older diesel vehicles from the city on Wednesday.