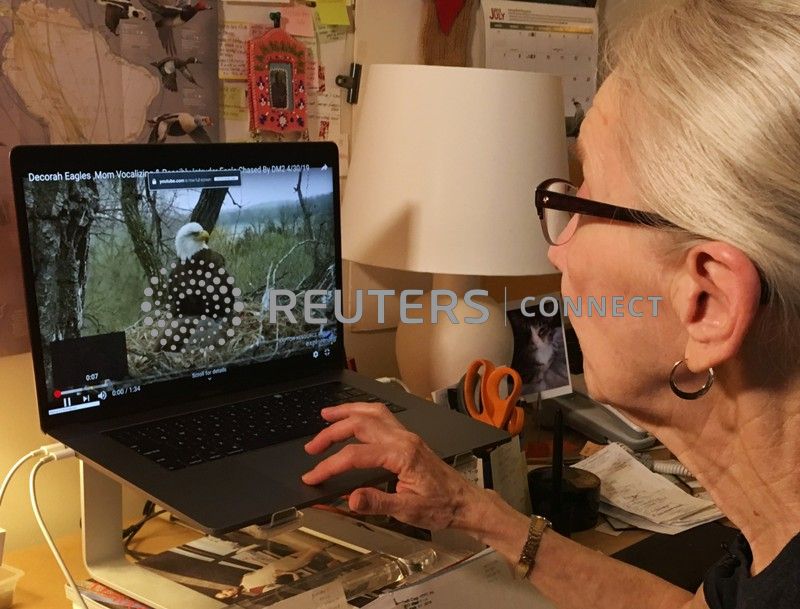 (Reuters) – On the brink of extinction a half-century ago, the bald eagle is thriving in the internet age, fascinating a devoted corps of Americans who regularly monitor the majestic birds of prey via web-cams set up at more than a dozen nests in the wild.

The bald eagle, designated as the national emblem of the United States in 1782, has long symbolized the American ideal of freedom. For people like Kevin Fossett, a U.S. Navy veteran who likes to check up on a nest in Florida, the sight of the birds stirs feelings of patriotism, especially with the approach of Independence Day.

Fossett said in recent years he has watched several eagle eggs as chicks inside peck through the shells and emerge as newborns, usually in the winter or early spring. By July 4, the eaglets typically have taken flight and left the nest.

“Flying free, as they should be,” said Fossett, 50. “Total independence, just like our national holiday.”

Fossett clicks on an “eagle-cam” daily using a tablet on his screen porch in St. Petersburg, Florida, or at his fishing equipment business. He watches a nest more than 220 miles (354 km) away, near Jacksonville.

“Bald eagles inspire a lot of passion in their fans,” Breeding said. “They become like family to the people who watch them.”

The birds typically mate for life and use the same nest year after year to raise their young.

An eagle-cam in Decorah, Iowa, went viral in 2011 with 280 million views, and the site has drawn in many more over the years, said Amy Ries, spokeswoman for Raptor Resource Project, a non-profit organization that runs it. Seven eagle-cams at Explore.org saw a 223% increase in views in 2018 compared with 2017.

High-definition images streamed from the roosts allow the eagle fans to see close-ups of the birds. Viewers are able to count feathers, observe iris patterns or identify the bird’s prey before it is consumed.

“We can see the tiny eyelashes of an eagle,” said Veronika Soul, 74, a retired filmmaker who lives in New York’s Harlem neighborhood and watches two Decorah bald eagle nests daily. “We see things happen at nest level that people on the ground never see.”

The technology allows cameras to be rotated remotely, providing glimpses of life beyond the nest. Viewers say it is especially fun to see fledglings take their first flights.

Viewers of the Iowa nest recently saw an eaglet who was accidentally knocked off the nest. It managed to jump and flutter high enough up the branches of an adjacent tree to drop back into its family’s nest.

Pesticide poisoning and human encroachment on their habitat threatened eagles with extinction, with only an estimated 487 pairs remaining by 1963, according to the federal wildlife website.

After decades of federal protection, the eagle started a comeback. The turning point came in 1972 when the Environmental Protection Agency banned the pesticide DDT. The population has soared since then, and in 2007 the bald eagle was removed from the endangered list.

Ten years ago, there were 143,000 bald eagles in the United States, according to a 2009 U.S. Fish and Wildlife Service (FWS)survey, the most recent data available. Updated numbers are expected to be released next year and preliminary data indicate the population is rising, said FWS spokeswoman Vanessa Kauffman.

Most bald eagles are found in Alaska, while Minnesota, Wisconsin and Florida also have large populations, according to Breeding.

Worldwide, the bald eagle population is 250,000, with 88% spending part of the year in the United States, 31% in Canada and 8% in Mexico, said Patricia Leonard, spokeswoman for Cornell Lab of Ornithology in Ithaca, New York.

Eagle-watching can be a source of patriotic pride or a therapeutic way to ease the pain of illness, loss and even dying, avian experts say.

“In an eagle’s nest, life goes on,” Ries said. “When we look into the nest, we see something of ourselves staring back at us, but we also see something wild beyond our comprehension.”