France, Germany, Canada and U.S. back Britain over Salisbury poisoning 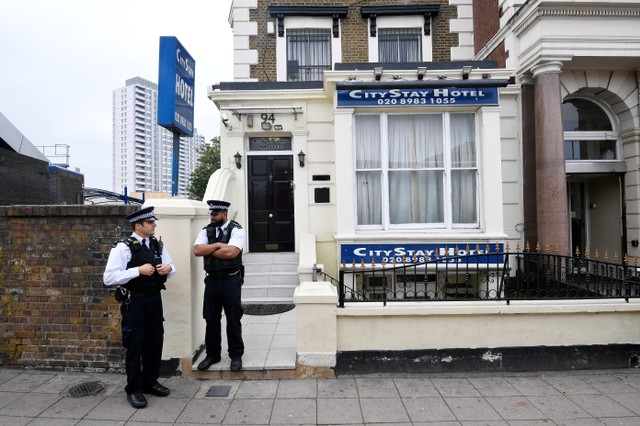 Police officers stand outside the City Stay Hotel used by Alexander Petrov and Ruslan Boshirov; who have been accused of attempting to murder former Russian spy Sergei Skripal and his daughter Yulia; in London, Britain September 5, 2018. REUTERS/Toby Melville

LONDON (Reuters) – Britain, France, Germany, Canada and the United States pledged on Thursday to work to disrupt “the hostile activities of foreign intelligence networks” and called on Russia to disclose its nerve agent programme.

In a joint statement, the other four countries said they backed Britain’s assessment that Russian officers were behind an attack in March on a former Russian spy and his daughter in the English city of Salisbury using nerve agent Novichok. Britain charged two Russians in absentia on Wednesday with attempted murder.

“We have full confidence in the British assessment that the two suspects were officers from the Russian military intelligence service, also known as the GRU, and that this operation was almost certainly approved at a senior government level,” the statement said, adding that the countries urged Russia to provide “full disclosure of its Novichok programme.”

“Yesterday’s announcement further strengthens our intent to continue to disrupt together the hostile activities of foreign intelligence networks on our territories, uphold the prohibition of chemical weapons, protect our citizens and defend ourselves from all forms of malign state activity directed against us and our societies.”

British U.N. Ambassador Karen Pierce briefed the 15-member U.N. Security Council on Thursday on the latest developments in the case of the attack on Sergei and Yulia Skripal. She said there was clear evidence of Russian state involvement.

Russia’s U.N. Ambassador Vassily Nebenzia told the council that inconsistencies in the British evidence were “off the charts” and London was just interested in “unleashing a disgusting anti-Russia hysteria.”