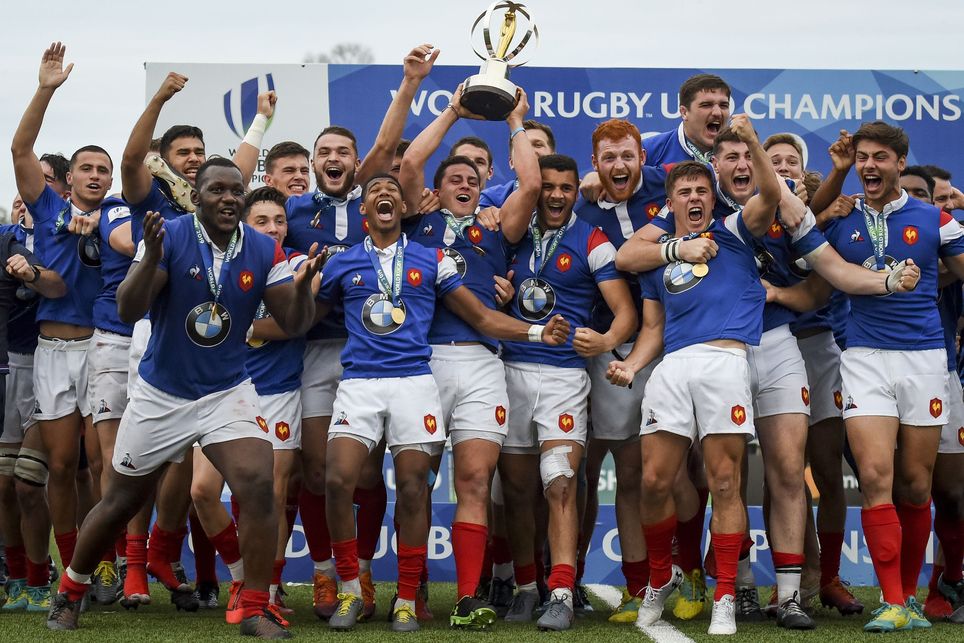 France players celebrate after beating Australia 24-23 in the World Rugby U20 Championship 2019 final at the Racecourse Stadium in Rosario, Argentina, on 22 June. Photo by Marcelo Endelli - World Rugby/World Rugby via Getty Images.

THE future of French rugby looks to be in safe hands after Les Bleuets became the third team to win back-to-back World Rugby U20 Championship titles with a 24-23 defeat of Australia in the final in Rosario on Saturday.

France join New Zealand (2008-11) and England (2013-14) in defending the coveted title after denying Australia a first title in the same Argentine city where they were humbled 62-17 by New Zealand in the 2010 final.

This was never going to be such a one-sided affair and the second final to be decided by a single point – after England’s 21-20 defeat of South Africa at Eden Park in 2014 – will live long in the memory with France and Australia producing 80 minutes of pulsating rugby that kept fans on the edge of their seats as it swung one way and then the other.

In fact, the lead changed hands no fewer than seven times before France fly-half Louis Carbonel kicked what proved to be the winning penalty with 15 minutes to go at the Racecourse Stadium.

Carbonel had been the star of France’s first title success on home soil last year, kicking 23 points in their defeat of England in the final, and he pulled the strings in this title decider as Les Bleuets recovered from conceding the second fastest try in U20 Championship final history, Mark Nawaqanitawase diving over after only 49 seconds.

With victory France also became only the second team to reach the semi-finals as the best runner-up and go on to lift the distinctive trophy after England did so in winning their first title in 2013.