France backs Poland over Belarus but warns EU row not over 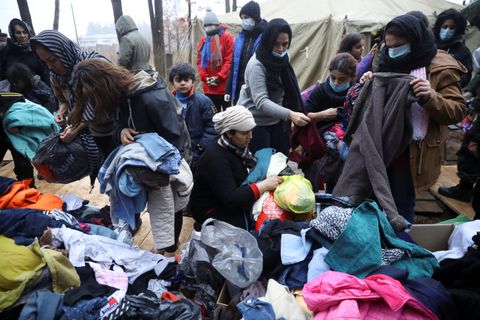 Migrants look through clothes near the transport and logistics centre Bruzgi on the Belarusian-Polish border, in the Grodno region, Belarus November 24, 2021. REUTERS/Kacper Pempel

PARIS/WARSAW, Nov 24 (Reuters) – France assured Poland on Wednesday of European Union support in its stand-off with Belarus, but reminded Warsaw it needed to resolve a row with the bloc over its values and the rule of law.

Polish Prime Minister Mateusz Morawiecki met French President Emmanuel Macron as part of a diplomatic effort to rally support for a tough response to what European Commission chief Ursula von der Leyen called an attempt by Belarus to use migrants to destabilise the EU.

While reaffirming his solidarity with Poland, Macron reiterated concerns over the rule of law and “called on the Polish government to find a solution that safeguards the core values of the European Union”, his office said.

With thousands of people fleeing the Middle East and other hotspots stranded on the EU’s eastern border, Poland, Lithuania and Latvia are on the front line of what the EU says is a crisis engineered by Belarusian President Alexander Lukashenko.

He has denied EU allegations that Belarus has flown migrants into the country and then pushed them across EU borders.

At the same time, Brussels is locked in a long-running dispute with Warsaw’s ruling nationalists over the independence of the Polish judiciary, press freedoms and LGBT rights.

The row came to a head in October when a Polish court ruling questioned the supremacy of EU law, which was seen in Brussels as a challenge to the bloc’s unity and stoked fears that Poland could eventually leave.

Morawiecki, is due to meet Germany’s acting Chancellor Angela Merkel and her prospective successor Olaf Scholz on Thursday and British Prime Minister Boris Johnson on Friday.

“The prime minister is now talking to the EU leaders, starting with Paris, President Macron, to keep the unity of the European Union…and be prepared for further actions,” Polish Deputy Foreign Minister Marcin Przydacz told Reuters.

Warsaw says that while the number of migrants at the frontier has fallen, repeated border-crossing attempts showed Minsk had not given up plans to use migrants as a weapon.

Morawiecki said he discussed a potential strengthening of sanctions against Belarus with Macron, whose office said he reaffirmed his desire to keep up the pressure on Lukashenko.

Exiled Belarus opposition leader Svetlana Tsikhanouskaya called for the EU to do more to isolate Lukashenko and ensure that economic sanctions, imposed in July, remain strong.

“Let us be firm,” she told the European Parliament in Strasbourg. “We must not let lobbyists block the necessary sanctions. Let’s close all remaining loopholes.”

However, Russian President Vladimir Putin told European Council President Charles Michel in a phone call that the EU’s plans for sanctions against Belarus were counterproductive, the Kremlin said on Wednesday.

​ The EU hit Belarus with sanctions after Lukashenko’s violent crackdown on protests against his disputed re-election last year. Diplomats say the latest package of sanctions agreed in response to the border crisis should be approved and adopted in early December, with a working deadline of Dec. 2.

As the Polish Border Guard reported more attempts by migrants to force their way across the border, Warsaw’s concern, shared by its neighbours, is that the months-long tensions could escalate into a wider, regional conflict.

Ukraine, which says it fears being drawn into the crisis and has accused Russia of massing its troops nearby, said it had launched an operation to strengthen its frontier, including military drills for anti-tank and airborne units.

Estonian Prime Minister Kaja Kallas told Reuters the EU must spell out to Russia that there would be a high price to pay if it acted against Ukraine, urging the bloc to quickly agree on how to deter Moscow.

While the international community accuses Lukashenko of orchestrating the crisis, human rights activists say Poland has contributed to the migrants’ suffering with its actions.

Human Rights Watch said in a report on Wednesday that Poland shared responsibility with Belarus for the dire conditions.

It cited cases of migrants separated from family members taken in for medical treatment or who made it across the border only to be pushed back without being able to apply for asylum.

“Men, women, and children have been ping-ponged across the border for days or weeks in freezing weather, desperately needing humanitarian assistance that is being blocked on both sides,” Lydia Gall, senior Europe and Central Asia researcher at Human Rights Watch, said in a statement.